Ronn McFarlane's latest is a collaboration with instrumentalist Mindy Rosenfeld that takes them from Renaissance dance to 18th century Scotland. NOTE: All of the music on this program is from the recording Nine Notes that Shook the World featuring Ronn McFarlane and Mindy Rosenfeld. It is on the Sono Luminus label and is CD DSL-92169. 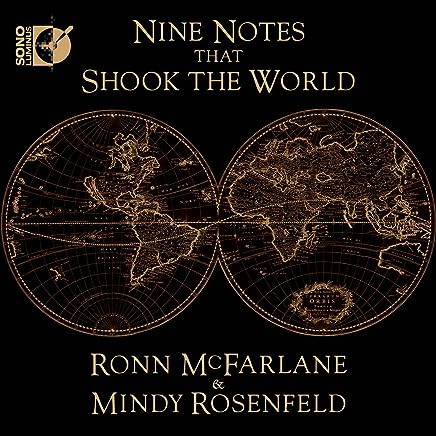 http://www.sonoluminus.com/p-364-nine-notes-that-shook-the-world.aspx
From Audiophile Audition:
Lutenist Ronn McFarlane and instrumentalist Mindy Rosenfeld are best known as founding members of the Baltimore Consort, now almost a legendary cult group that recorded many memorable discs for the now-bought-up Dorian label. Sono Luminus, created by Cisco Systems founders Sandy Lerner and Len Bosack, is an advanced step up on the Dorian label which it acquired, creating Blu-ray audio discs of superb quality, and coupling some of them with standard CDs as well, which makes it nice for portable listening. Make no mistake—the CD is excellent, but the Blu-ray with lossless surround is outstanding.
The title Nine Notes that Shook the World is a bit deceptive. One might be expecting something revealing or mysterious considering the title, but it’s actually taken from the source of a Scottish tune, ”Dorrington Lads”, found in the William Dixon manuscript from a collection named as the title of this album. The rest of the disc is a mixture of classical and folk, reflecting the fact that at the same time composers like Bach and Handel were composing there was a vibrant and rich heritage of Scottish music being created only a few hundred miles from their habitats. The program works beautifully, and both artists play with the same grace, style, and panache to which we have become accustomed.
1. Grays Inn — John Adson
My Lord Willoughby’s Welcome Home — John Dowland
2. Brando di Cales — Cesare Negri
Passo e mezzo — Fabritio Caroso da Sermoneta
3. My Lady Carey’s Dompe — Anonymous
Lady Wynkfield’s Rownde
4. Rondeau dans Zaïde — arr. by Michel Blavet
Sonata in G Major — G. F. Handel
5. Adagio
6. Allegro
7. Adagio
8. Bourrée anglaise
9. Minuetto
10. Andante (from BWV 1034) — J. S. Bach
11. The Thistle — James Oswald
12. The Laurel — James Oswald
13. Dorrington Lads — Traditional
Yeil, Yeil
A Wife of My Ain
14. Passemeze — Adrian Le Roy
Premier Suite in E minor — Joseph Bodin de Boismortier
15. Prélude Lentement
16. Allemande Modérément
17. Rondeau ‘LES CHARITES’ Gracieusement
18. ‘L’EMERVEILLÉE’ Gaiment
19. Gavotte
20. Menuet
21. Minuetto and Variations — Pietro Locatelli
22. Sitting in the Stern of a Boat — Traditional
Thugamar Fein an Samradh Linn
The Road to Lisdoonvarna
The Star Above the Garter
Carnac
23. Branles de Village — Robert Ballard