You are here: Home / Playlists / A Voice in the Wilderness

Alexander Blachly with his Pomerium Ensemble tackles some of the late-Renaissance Italian tradition of Mannerist motets on his latest recording. 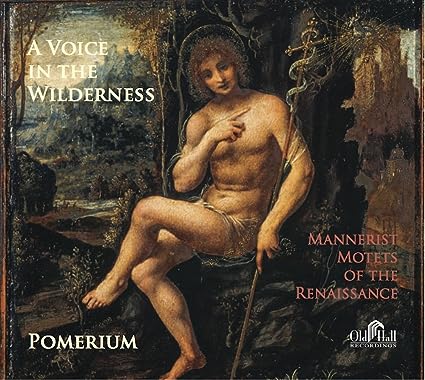 NOTE: All of the music on this program is from the recent release of Renaissance mannerist motets from the ensemble Pomerium directed by Alexander Blachly. The recording is on the Old Hall label and is CD OHR 002. For more information:

In 1914, the art historian Walter Friedlaender, one of the first writers top promote the concept of Mannerism, characterized it as an "anticlassical" style. By that he means that Mannerist artists used the techniques and the ideas of their classical predecessors, but exaggerated and distorted them to create a more expressive and personal type of "unreal" realism. One thinks immediately of Parmgianino's Madonna of the Long Neck or Conversion of St. Paul, in which the figures, especially the horses in the latter painting, have heads that are out of proportion to their bodies, while the bodies are elongated beyond any semblance of reality; yet all the individual elements are painted with such precision in the details that they have an almost photographic quality. As a term used by music historians, Mannerism usually refers today to the musical character of avant garde works from the late Renaissance that foreshadow the systematic harnessing of emotional effects by Baroque composers. The distortions and exaggerations in this case involve harmonic instability, asymmetries of phrase structure, and unexpected and/or strangely resolved dissonances.