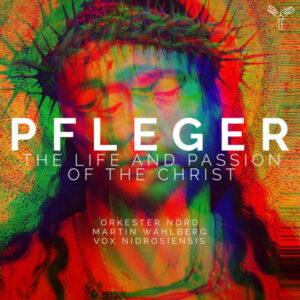 This recent recording of music by the rarely-heard Bohemian-born North German composer (who lived from c.1635-1686), traces the life of Christ in a group of Lutheran sacred concertos.

NOTE: All of the music on this program features the ensembles Orkester Nord and Vox Nidrosiensis conducted by Martin Wåhlberg. It is on the Aparte Music label, and is CD AP 249.

Augustin Pfleger from the Bohemian town of Schlackenwerth (today: Ostrov) was court kapellmeister in Güstrow in Mecklenburg and in Gottorf Palace in Schleswig-Holstein. Among the baroque masters he is one of the lesser known. His compositional work can be located between Schütz and Monteverdi on the one hand and Buxtehude and Bach on the other. - The Norwegian conductor Martin Wåhlberg, together with the Trondheim ensembles Vox Nidrosiensis and Orkester Nord, has selected six cantatas from Pfleger's extensive oeuvre, which dramaturgically combine to form a Passion oratorio.

As early as 1690, Augustin Pfleger was recognised as one of the most celebrated and innovatory composers of the seventeenth century.

His origins remain obscure: it is thought that he was born around 1635 at Schlackenwerth in Bohemia. At Nuremberg he studied with Johann Erasmus Kindermann, a composer influenced by Italian music. But it was in his home town that he found his first job, as Kapellmeister to the Duke of Sachsen-Lauenburg.

In 1662 he became Vice-Kapellmeister at Güstrow and published his opus 1: Psalmi, Dialogi et Motettae a 2, 3, 4 et 5 vocum. After three years of unremitting toil, Pfleger entered the service of the Nordic court of Gottorf in 1665.

His reputation was such that he was asked to compose the music for the inauguration of the University of Kiel in October 1665. His compositions display a stylistic kinship with the greatest figures of his time: Buxtehude, Tunder, Weckmann. At the height of his fame, he left the service of the Duke of Holstein-Gottorf in 1673 for an unknown destination. He later returned to his home town where he died in 1686.

The pieces on this programme come from the Düben collection at Uppsala University in Sweden. This library holds most of his Geistliche Konzerte (sacred concertos), composed to cover the entire liturgical year. They are situated midway between the works of Heinrich Schütz and the cantatas of Dietrich Buxtehude. Their form as dialogues between named protagonists gives some of these compositions a highly expressive, dramatic aspect. The recitatives are in the vein of Carissimi while the arias are frequently sung by two voices.