You are here: Home / Playlists / Back to the Middle Ages

Ars Subtilior, Hildegard von Bingen, and the remarkable III Millennio label with the idea of roses in the medieval imagination. 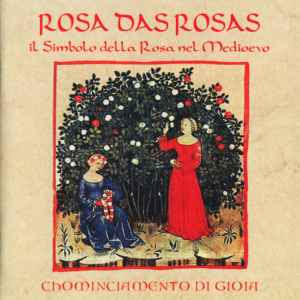 The program proposes some songs dedicated to the rose in its various symbolic aspects in XIII and XIV sec. The release's title is the beginning of one of the most famous Cantigas de Santa Maria, which proposes the main rose medieval allegory as an image of Virgo, also used to represent many holy concerts. Many values found a metaphor in the rose. This work stresses the universality of a symbol that inspired secular, religious and music literature all around Europe, and it found equal citizenship in three great cultures, the Hebrew, Christian and Islamic ones, that stood out the medieval occident. The group Chominciamento di Gioia is among the most important in Italy for the performance of early repertoire, note their collaboration with Angelo Branduardi in the realisation of his project "Futuro Antico".
1 Rosa Das Rosas
Composed By – Alfonso X El Sabio 5:36

2 Ther Is No Rose Of Swych Vertue
Composed By – Anonymous 2:39

The dramaturgy of the project is inspired by the life philosophy of Hildegard von Bingen as is preserved in her musical and literary work. On the one hand we can perceive Hildegard as a mystic and saint woman, on the other hand as a strong abbess and politically gifted person. Those two points of view are the most important in the interpretation of her concept of human being. Her music and visions are full of humanity and divinity as well, it inspires me to call the concert programme “Ego sum homo” (I’m the man). The female vocal ensemble, Tiburtina, was established in 2008 from former members of the Schola Benedicta ensemble. It is built on its tradition and goes on to interpret western plainchant, medieval polyphonic music and contemporary music.

from Gramophone: One of the special pleasures at this year’s Antwerp Early Music Festival was hearing what may have been the Western European debut of the Tiburtina Ensemble from Prague. Founded 10 years ago by Barbora Kabátková, the group is entirely of women with a particular interest in monophonic music, particularly from Bohemia (though they also perform new music). As is quickly clear from the present CD, they are all trained singers, and most of them also have a substantial career as oratorio soloists. So their ensemble sound is rich, with the occasional touch of vibrato.
AdTech Ad
Their Hildegard collection, mostly of lesser-known pieces of Hildegard (but with three anonymous polyphonic conductus and ending with a psalm), puts the focus on two aspects of the ensemble: the marvellously controlled unison of the 10 singers, flexible and at the same time energetic; and the nicely differentiated vocal colours of the individual soloists. In addition they have two medieval harps (played by Kabátková and the other leading figure in the group, Hana Blažíková) as well as a dulce melos played by the Austrian virtuoso Margit Übellacker. Kabátková’s booklet note describes these as ‘let us say, Old Testament plucked string instruments’; but it would be fairer to say that they are well documented from Hildegard’s day and are beautifully deployed, essentially with triadic figures above a drone (on the final) and with the dulce melos lightly decorating the vocal lines.

That is all to say that the music of Hildegard is presented responsibly but with a newly minted colour to the discreet instrumental accompaniments. It is an eminently worthwhile addition to the Hildegard discography.

From Early Music Reviews: Ensemble Santenay is a group of four musicians who met during their studies of medieval music in Trossingen, Germany. Using the simplest of instrumentation (flute, fiddle, lute, and organetto) and one (soprano) singer, their approach to performance combines innovation with simplicity. Their choice of repertoire for this CD is apt: the so-called Arts Subtilior period from the end of the 14th-century. Stemming from the Parisian confraternity of ‘eccentric young intellectuals’, Cercle des fumeux, the style spread to Avignon, Northern Italy and Cyprus. Arts Subtilior uses simple but expertly crafted musical means and complex rhythms to express emotion. What Ensemble Santenay uniquely bring to the music is their esoteric introductions to several of the pieces: little soundscapes with titles like ‘haze, ephemeral, emanation, exhalation and perfume’. These are based on improvisations on some of the musical themes of the songs and the sounds of the instruments, all subjected to some technical wizardry by their musical produced Thor-Harald Johnsen. The longest, ’emanation’, lasts nearly three minutes and features the organetto phasing in and out of flute sounds within an atmospheric background.

There are two instrumental solos alongside vocal pieces by Hasprois, Solage, Cordier and Ciconia. Unusually for this repertoire, the melodic line switches between singer and instruments, the later taking up the section with no words set. Many groups performing this repertoire add text to the untexted lines, but I like this interpretation, both logically and musically.

An intelligent programme note introduces the music, and Santenay’s approach to performing it. It is one of those recordings that you can allow to just float around you. But it is equally rewarding when following the texts and the complex interweaved musical lines. Julla von Landsberg’s voice has just the simplicity and clarity needed to blend with the instruments. She also plays the organetto, along with fellow musicians Orí Harmelin, lute, Elodie Wiemer, recorders, and Szilárd Chereji, viella. My only criticism is that, at 51 minutes, this is a very short programme. That is a shame as the context and presentation is worth hearing more of.