You are here: Home / Playlists / Chants of the Holy Orders

The great Discantus Ensemble gives us early Dominican chat, an Italian recording traces the Franciscans, and a new attempt to reconstruct Mozarabic chant.

I. Gloriosus Franciscus: The Music for St. Francis from the 13th to the 16th Century (Anonima Frottolisti). Tactus CD TC 250001. With Gloriosus Franciscus, Anonima Frottolisti presents a cross-section of history of music relevant to the Franciscan ideal through the first three centuries of the history of the Order: this sequence of selected pieces reveals both the learned side of this music and its closeness to “folk” devotion during the period straddling the Middle Ages and the Renaissance, as a symbolic homage to the city where Anonima Frottolisti was born (Assisi): “Where the coast is more fringed than that of the coast, a sun was born in the world, as the Ganges sometimes does, but whoever speaks of it does not say Ascesi, which would say short, but East, if you really want to .” (Dante Alighieri, Divina Commedia, Paradiso, 11th Canto). The ensemble Anonima Frottolisti is an experienced group, which specializes in early music and medieval music. Their previous recordings have been widely well-received. 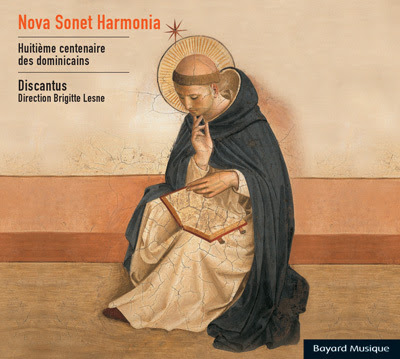 In 1206, Dominique de Guzmán establishes a feminine community in the hamlet of Prouilhe, near Carcassonne, around a chapel dedicated to Notre-Dame. From 1206 till 1217, he dispenses regularly his teaching at Prouilhe before creating the Order of the Friars Preachers and sending his followers to travel the world.

In 1217, the Order settles down in Paris, at the top of the street Saint Jacques (hence the name of Jacobins): quite close to the cathedral and to the university, they find themselves then at the heart of this Paris bubbling with musical creation and with intellectual life.

After his canonization in 1234, the feast of St. Dominic was very fast integrated into the calendar of the Order and new songs are composed in his honor. Magnificent manuscripts, mostly stemming from Dominican sister's convents, allow us to make relive this directory of plainchant.

Although there is no big collection of polyphonies noted at that time and associated with the Order, numerous testimonies echo of the practice of multiple-parts songs, as protected fragments from the manuscript of Wimpfen - Dominican convent of the valley of Neckar in Germany -, as well as the numerous musical examples given by the great Dominican theorist Jérôme de Moravie, in his treaty De Musica (at the end of 13th century).

Finally, the very specific cult dedicated to the Virgin Mary, in a burst of fervour and popular devotion, comes up in the songs of the Rosarius, the collection of sermons, miracles and the songs in langue d'oïl, copied by a Preaching Friar for the convent of the Dominican sisters of Poissy, at the beginning of the 14th century.

Alternating plainchant, vocal polyphonies and songs to the Virgin, this concert proposes a sound evocation of the first century of the life of the Order, giving a special place to the Dominican Nuns: "Vous ne savez que me fist Jhesus-Crist, li miens amis, quand Jacobine me fist par grant amour…" 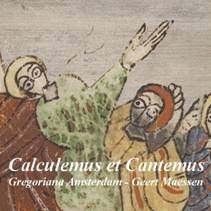 Gregoriana Amsterdam is a (small) vocal ensemble specialized in the performance of the so-called Gregorian chant, one the oldest known music repertoires of some substance of Western Europe. The base for Gregoriana’s performance practice is formed by the oldest known manuscripts in which the repertory has been preserved with musical notation, and besides among other things by medieval treatises about music. As much as possible the ensemble uses self-made reconstructions and transcriptions of the repertory. Since March 2014 especially from the tenth-century Mozarabic León antiphoner.

Gregoriana Amsterdam was founded in 2002 by Reinier van der Lof. In 2006 Reinier also initiated a female branch, sometimes called Virga. Gregoriana sings in the church liturgy, gives concerts, delivers lectures illustrated by sung music examples and holds workshops. In order to give optimal expression to the beauty of Gregorian chant, a church with good acoustics is preferred then. Gregoriana’s home base is the Amsterdam Obrechtchurch, where we celebrate Gregorian Vespers every third saturday (except in july and august, see agenda). Gregoriana is conducted by Geert Maessen.