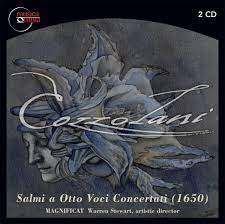 This week and next Magnificat ensemble director Warren Stewart joins us as a guide through the remarkable music of this 17th century Benedictine nun from Milan.

Over the last twenty years, performances and scholarship have given us some idea of the remarkable musical world of cloistered nuns in early modern Italy.  This recording of a complete 1650 publication by one such nun, Chiara Margarita Cozzolani (1602-c.1677), testifies to both her own musical creativity and to the high skills of the musicians in her Benedictine house of Santa Radegonda in Milan, across the street from the city’s cathedral (the monastery was razed by the early nineteenth century).

There is evidence for excellent music-making at S. Radegonda as early as the late sixteenth century.  Writing in 1674 (while Cozzolani was still alive), the Milanese poet and occasional librettist Carlo Torre praised its singers thusly: “It can be said that in our own times, Mount Helicon has been transported to this monastery, due to the excellence of its veiled singers, or that spirits from on high fly in this church, since rapturous melodies are heard ... So that you readers do not think I am speaking in hyperbole, I will wait for you there on the next feast-day, and you will take away true proof of what I have said”.  A few years earlier, the urban panegyricist Filippo Picinelli named her specfically in his praise of the house’s music: “Among these sisters, Donna Chiara Margarita Cozzolani merits the highest praise , Chiara (“clear”) in name but even more so in merit, and Margarita (“a pearl”) for her unusual and excellent nobility of [musical] invention”.
The public fame of S. Radegonda’s singers would also lead to severe problems for the house in the 1660s and 1670s, when the strict archbishop Alfonso Litta attempted to crack down on disciplinary “irregularities”, including music.  The archival documents of this battle between the nuns and the hierarchy include both a letter from Cozzolani herself, who was by then the abbess of the house, as well as a description of the two choirs of singers and the instrumentalists of S. Radegonda—this latter in defiance of the many prohibitions on nuns’ playing of melody instruments.

Despite the fame, only some aspects of  Cozzolani’s life are evident, even after years of research.  Her family were probably well-off merchants who lived in the city center, and—like her aunt before and her sister around the same time—she professed her final vows at the house in 1620.  She must have been an active musician, probably a singer, possibly also an organist, from that time into the 1650s, although there are no specific tributes to her own skills until Picinelli’s.

The collection, the Salmi a otto voci concertati...  recorded here in its entirety was Cozzolani’s fourth published in the short span of ten years (1640-50; one publication survives complete, one incompletely, and the first seems completely lost).  It was dedicated to her almost exact contemporary Alberto Badoer, a Venetian patrician and the bishop (1633-1677) of the small city of Crema in Venetian territory some 40 kilometers southeast of Milan.

The book contains six settings of psalms for eight voices (Dixit, Confitebor, Beatus vir, Laudate pueri, Nisi Dominus, Laetatus sum) along with two settings of the Magnificat (Mary’s canticle); this must represent some of the pieces sung by the house’s two choirs at the afternoon service of Vespers, on both the day before (“First Vespers”) and the day of (“Second Vespers”) major feasts of the church year. There are also two other psalms with violins (Laudate Dominum is a short psalm often used to replace another text at the end of the psalmodic part of Vespers).  The rest of Cozzolani’s large edition consists of eight motets for various liturgical occasions for two to five voices without instruments, which could have been sung at Vespers, at Mass, or informally.

Cozzolani’s publication is one of only ten volumes published in Italy between 1630 and 1656 to include eight-voice Vespers.  We know that its publisher Alessandro Vincenti, the better of the two music printers in Venice, priced it at 14 lire, a fairly expensive edition due to the amount of paper used in its nine part-books, although not out of line compared to other editions of its size.  By way of comparison, the entire annual salary offered to Claudio Monteverdi’s successor as chapelmaster at St. Mark’s in 1643 was 1,920 lire.

Cozzolani’s selection of which psalms to set, and her combining the liturgical Vespers items with motets, are somewhat unusual.  Normally, such editions were put out by male church musicians who—whether seeking a job or thanking a patron—sought both to provide a usable commodity and to prove their ability to deal with a wide variety of psalmic texts.  In many churches, Vespers for major feasts over the course of a whole liturgical year would have involved the singing of twelve to fifteen different psalms, and thus many musical editions include something like this number (Monteverdi’s edition of 1610 is an exception, as it is targeted only to Marian feasts).  Cozzolani’s Benedictine order sang only four, not five psalms, at its Vespers, and the total number of such texts for Benedictine Vespers over the church year was quite limited: essentially the six texts which she set.  Thus—although it was a commodity meant to be sold for a wider market than just that of monastic houses—her edition represents her house’s liturgy and musical practice directly, and the fact that she would have had no possibility to take a “job” outside her cloistered house meant that she needed to show her compositional virtuosity through the texts that her order used, not other psalms sung in cathedrals or other churches.

Thus her edition is a kind of monument to music at S. Radegonda.  Some evidence suggests at least one occasion on which some of the psalms, and some of the motets, could have been heard.  The major cultural event of mid-century Milan was the two-month visit in summer 1649 of its new queen, Maria Anna of Austria (1634-1696), who was enroute from her Viennese birthplace at the Austrian Habsburg court on her journey to Spain in order to marry her Spanish Habsburg uncle, Philip IV.  Her entry into the city marked the first time that she set foot in her new realm, as Spain had ruled Milan since 1535.  Her stay in the city was marked by opera and theater performances in her honor, ceremonial homages by local nobility and representatives of neighboring duchies, and not least the young princess’s own visits to the many female monasteries of Milan.

On 25 or 26 June (the chronicles differ), she visited S. Radegonda, “from afternoon into the night” according to one Spanish chronicler, and thus perhaps for eight hours.  That afternoon, the nuns would have been celebrating Vespers for the feast of a saint of their order, the 12th-century monk St. William of Vercelli.  Thus they could have performed up to four of Cozzolani’s psalm settings for the queen.  In addition, one of the motets in the 1650 collection, Venite sodales, prominently quotes a phrase used in the liturgy on that feast: “Quis est iste? et laudabimus eum”, the first solo moment in the piece.  Furthermore, the unusual text of a duet, Venimus in altitudinem maris, invokes Mary’s protection of seafarers, reworking the miracle of Christ calming the storm on the Sea of Galilee.  This would have been appropriate for the young Maria Anna, who still faced the long and perilous sea voyage from Genoa to Barcelona as the final stage of her trip from Austria to Spain.  Some of the publication’s contents thus seem to have a link to the future queen’s visit to the monastery, and might well have been heard in June 1649.

Cozzolani’s dedication to Badoer also notes that the prelate had often praised her “rough songs” and—since bishops are considered shepherds—she added that, appropriately, “the music, as my creation, has not a little of the rustic and the woody, and thus in that respect [is] pastoral”.  The frequent use of the dialogue, the pastoral genre par excellence, in the music bears this out.  There are three named dialogues in the book (Gloria in altissimis, Maria Magdalene, and O caeli cives), for Christmas, Easter, and St. Catherine (of Alexandria), respectively.  That the painting over the main altar in the public (external) church of S. Radegonda was Simone Peterzano’s depiction of the Mystic Marriage of St. Catherine with Sts. Radegond and Justina (the last-named was the patroness of Cozzolani’s Cassinese Congregation of Benedictines) shows the importance of Catherine in the public face of the house.  It is also possible that for some performances, “Radegunda” might have been substituted for “Catharina” in this very generic sanctoral text.

Dialogic procedures are also quite present in the psalm settings, notably by the use of “troped” refrains inside the declamation of the texts.  The doxology (“Gloria Patri”) is used this way in Dixit Dominus, and a double refrain (“Beatus vir”/ “Jocundus homo”) structures Beatus vir.  Most striking in the psalm settings is the kaleidoscopic use of different voice groupings, from solos to tuttis, for different verses, and the variety of the voice combinations beyond simple two-choir antiphony.

The motets seem to be a clear selection of pieces for the house, as most standard texts (e.g. Marian antiphons) are not found.  The two pieces on the so-called “Double Intercession” (salvation from Christ’s blood and from Mary’s milk which nourished the Savior), O quam bonus es and Tu dulcis, o bone Jesu, are among the most unusual pieces in the Milanese repertory at mid-century, notably the refrains (“Quo me vertam nescio”, a quote from St. Augustine) and ecstatic melismas of the former.  There is even a sense of theatricality in the performance indications for the end of the Christmas dialogue, “Each part should soften its voice, as if it were going away”, as the shepherds prepare to go to Bethlehem.  Similarly, the Easter dialogue is essentially a frame for a long and passionate lament by Mary Magdalene, a favorite model for both nuns and for sinners in general.

The 1650 print was issued with normal voice-ranges: soprano, alto, tenor, and bass, clearly because it was meant to be sold on the open market for institutions using such choirs.  In terms of performance, S. Radegonda seems to have had singers who could perform tenor parts, at least, at something like written pitch, while the vocal bass parts were probably transposed upwards and sung by nuns (there is no evidence for male participation in any of the house’s ensembles).  This recording with women singers uses a variety of solutions to the problem: octave transposition of tenor and bass lines; some high tenor lines sung largely at written pitch; and occasional upward transposition of entire pieces.

Sadly, Cozzolani seems not to have any more music after this 1650 publication. She must have taken on important responsibilities in the house’s attempts to defend itself against Archbishop Litta, and thus had less time for music, as a new generation of the house’s singers came to the fore. Her name quietly disappears from the house’s lists between 1676 and 1678.  But her achievement in producing such variegated and often striking music remains, even if more than three centuries were necessary for its rediscovery.