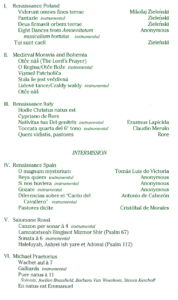 Founded in 1977 by Robert Eisenstein, Christopher Kendall, and Scott Reiss, the Folger Consort is ensemble-in-residence at the Folger Shakespeare Library. With over thirty performances each season, including appearances on major series in cities across the country, the Consort has created one of the most successful early music series in the country. The ensemble's performances are broadcast locally on WETA-FM, and nationally over National Public Radio and American Public Radio. A new title has just been added to the Consort's discography: "When Birds Do Sing" features a program of English music of the 17th century with Rogers Covey-Crump.

Preservation of this program is made possible by a generous grant by Matt Brooks.

Christmas with the Folger Consort and the Washington Bach Consort 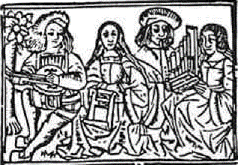 As has become our Christmas tradition, we are presenting a wide variety of musical styles, this year ranging from 1400 or so in Moravia to the early 1600s in Italy and Germany. While the second, third, and fourth groups on the program are of earlier styles, the balance of the music performed here is from that period of transition between the old style of the Renaissance and what we now know as the Baroque. Three unique musicians are featured in these works: the Pole Mikolaj Ziele-nski, the Italian Jew Salomone Rossi, and the German Michael Praetorius. The music of this time is particularly apt for the forces we have assembled: a small choir, organ and lute for continuo, and four melody instru­ments. There are several grand and sonorous Christmas pieces for multiple choirs, in the style of the Venetian master Giovanni Gabrieli, as well as more intimate works. Most of these are immediately appealing, requiring no special knowledge to appreciate. And although the music varies, there is a common thread among the simple folk melodies of the Moravian Brethren, the forthright Lutheran chorales, and the intricate webs of polyphony spun around the ancient Gregorian chants. Excluding, of course, the Old Testament Psalm settings of Rossi, all of these works have the telling of the Christmas story in Common.

Christianity was introduced to Poland late in the 10th century, in its west­ern rather than eastern form. From this point on, the country was open to western European cultural influences, and music was no exception. The earliest Polish music manuscripts date from the I lth century, and contain the local variety of Gregorian chant. It is not surprising that most western art arrived in Poland from Germany, but by the 15th century French and Italian music was known and appreciated. In fact, the Collegium Rorantistarum, a society founded by King Sigismuncl the Elder in 1543, was dedicated to the "noble Italian art." The greatest Polish composer of his time, Mikolaj Zielehski certainly was well-versed in Italian composition. There is evidence that he studied in Rome, and he served as the director of music to the Archbishop Wojciech Baranowski, primate of Poland. His setting of the Christmas Gradual Viderunt Omnes fines terse is a skillfully wrought example of late Renaissance polyphony, while the Christmas Offertories Deus firmavit orbem terrae and Tui suet caeli are splendid examples of Venetian-style polychoral writing — brilliant and sonorous works that once must have filled Gniezno Cathedral. The Fantazie performed here is one of three published by Zielefiski, the earliest Polish music specifically for instruments.

The set of eight little dances from a Polish print of 1622 are typical dance music of the time, with some of the distinct national flavor that made Polish dances much admired by western composers.

The eminence of Jan Huss (1373-1415) and the Czech Pre-Reformation with its strict emphasis on simplicity and participation in worship probably hindered the development of a native art music tradition. Polyphonic music and instru­ments were essentially banished from church until the 16th century. The Hussites (lid sing in church, however. They favored simple, usually monopho­nic, hymns of a decidedly folk character, like most of the examples performed here. As these settings prove, simplicity has its charms. Lidove tance and Czaldy waldy, both engaging dances, are the only surviving Czech instrumental pieces of the time. As is evident, the prohibition against polyphony did gradu­ally relax, although the counterpoint is crude by western standards.

The Czech Brethren, later known as the Moravians, a group with similar religious precepts to those of the Hussites, emigrated to America in the early 18th century. Their settlements, especially the one at Bethlehem, Pennsylvania, became important musical centers.

Erasmus Lapicida, who died in 1547, was one of the longest-lived musicians in his city of Vienna, having been born around 1445. He had connections to the Hapsburg Court, and composed well into his old age. This probably accounts for the wide variety of styles and genres found in his music. Our example, Nativitas tua Dei genitrix, is found in an Italian print of 1505. With its chordal passages and attention to harmonic organization, it shows clear evidence of Italian influence.

Cypriano de Rore (1516-1565) was a tremendously important Flemish composer best known for his madrigals. He stands at the forefront of those musicians who were willing to discard the smoothly flowing counterpoint of the Renaissance in search of new ways to project the sense of a poem. Rore, a pupil of the great Adrian() Willaert in Venice, was no less a master of the motet. His six- and seven-part Christmas motets performed here show ample skill in Renaissance polyphony, standing midway between the seamless long lines of the counterpoint of his teacher Willaert and the lucid transparent serenity of that of Palestrina. Claudio Merulo, another member of Willaert's circle in Venice, is one of the most distinguished Italian composers of keyboard music in the later 16th century.

Spanish music of the late Renaissance developed a distinct national charac­ter. The first three instrumental pieces performed here are villancicos, the form favored by Spanish poets and musicians of the 16th century. The word is from villano, or peasant, and many of these pieces do retain the angular rhythms and lilting melodies of Iberian folk songs. The blind organist Antonio de CabezOn (c.1510-1566) was perhaps the greatest keyboard performer and composer of his generation. CristObal de Morales (c.1500-1553) was without any doubt the most important figure in early 16th-century Spanish vocal music. He was deeply concerned with setting the sense of his texts and with contrapuntal clarity. Pastores dicite is one of his exquisite motets for Christmas. Tomas Luis de Victoria (1548-1611) probably studied with the great Palestrina in Rome before returning to work in his native Spain. Victoria wrote no secular music. His fervently devout style represents the spirit of the Counter-Reformation better than any other composer's.

Salomone Rossi was born in 1570, and spent his entire professional career in Mantua. He had strong connections to the court of Duke Vincenzo Gonzaga, and dedicated several publications to members of the ruling family. Since he was Jewish, Rossi would have been forbidden from singing in the Duke's Chapel, the usual permanent employment of a talented composer of the time. He was a viol player, and payments are recorded for his services in that role from the court. However, Rossi's primary associations were with the Jewish theatrical troupes that had a large role in Mantuan theatre both in and outside the ghetto. His instrumental pieces, especially the sinfonias and sonatas, are his most innovative works. With their predominant upper parts and supporting basso continuo, these works are an important step in the evolution of the Baroque trio sonata. Rossi's unique vocal music in Hebrew is contained in his publication Hashirim usher lishlomo, or the "Songs of Solomon." The title is a pun on Rossi's own name, since none of the texts, though mostly Old Testament, are from the Songs of Solomon. The music of these pieces reflects the influence of Mantuan colleagues such as Monteverdi, but also the school of Venetian writing associ­ated with Gabrieli.

If one has any familiarity at all with late Renaissance and early Baroque Christmas music, it will be with the works of the great theorist and composer Michael Praetorius (1571-1621). This is not surprising: he wrote over 1,000 works based on Protestant hymns and the Latin liturgy of the Lutheran church. Praetorius was one of the most versatile musicians of his day, writing a variety of settings ranging from two parts to giant Venetian-style polychoral pieces. The Wachet auf and Puer natus settings performed here are of the latter type. Although based on tuneful German hymns, they are Italianate treatments reveling in the sonorities produced by multiple choirs in large, reverberant places.

Syntagma musicum, a theoretical treatise of Praetorius' last years, tells us much about instrumental practice in the early Baroque. The Galliards per­formed here are from Terpsichore, his collection of dances, an invaluable source of information about the French dance music of the time.