A new recording of the huge Tenebrae settings (in a three-CD set).

NOTE: All of the music on this program is from the recording Gesualdo Tenebrae featuring Graindelavoix directed by Bjorn Schmelzer. The recording is on the Glossa label and is CD number GCD P32116. 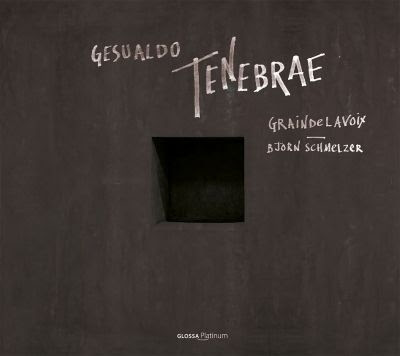 There is something deeply troubling and inscrutable in Carlo Gesualdo’s music, something that any listener, even the most inexpert one, will unfailingly experience. This most particularly holds for Tenebrae Responsoria (1611), his definitive statement, his monument, his testament. It is as if this work, firmly embedded in the framework of liturgy for the Holy Week and reaching back to the practices of the Gregorian chant, would constantly extend over its boundaries and transgress its time and setting, immediately addressing modernity, disturbing all the rules in a severe tension, reaching into something that borders on chaos and madness, within the very order and religious devotion it fully espouses.

From All About Jazz: Choral composer Carlo Gesualdo (1566 -1613) has a public relations problem. On October 16, 1590, Gesualdo came upon his wife, Donna Maria, and her aristocratic lover, Fabrizio Carafa, in flagrante delicto, brutally killing them both and dragging their mutilated bodies in front of his Palazzo Sansevero for all to see. As Gesualdo was of noble birth he was found not to have committed a crime. Trying to square this behavior with his composing the greatest collection of madrigals, second only to Monteverdi, is a chore, until considering Gesualdo in the same light as English poet Ben Jonson, dramatist Christopher Marlowe, and Italian painter Caravaggio, all of who were murderers capable of the sublime.

As a composer, Gesualdo was a child of the Renaissance in name only. His compositional style was forward-thinking and among the most experimental and emotive of the period. Assertively polychromatic at a time when such was frowned upon by the Catholic Church (the Church preferring more monochromatic texts at the time) , Gesualdo's compositional choral style would not appear again until the late 19th century, and then, only in tonality. He composed five books of madrigals between 1594 and 1611.

Gesualdo's Tenebrae Responsoria, considered here in a recording by the Belgian vocal ensemble Graindelavoix under the direction of Björn Schmelzer, was published in 1611. The Tenebrae are a collection of responsories for Holy Week, rendered stylistically as madrigals (madrigali spirituali or madrigals on sacred texts). It consists of three sets of nine short pieces, one set for each of Holy Thursday, Good Friday and Holy Saturday, and a psalm and a hymn. Gesualdo composed the works for unaccompanied voices: two soprano parts, alto, two tenor parts, and bass.

The texts for Gesualdo's Holy Week compositions reflect Jesus's Passion and are sung in between the lessons at Tenebrae. Tenebrae (darkness) is a special liturgical service, performed during the Canonical Hours of Matins and Lauds on the last three days of Holy Week, anticipating each on the night before. Each service is made up of psalms, readings from the Book of Lamentations, the New Testament, the writings of Church Father, St. Augustine and the responsories. During the service, candles are progressively extinguished until the church is left in darkness. When originally performed, the rest of the service, that is the psalms and readings outside of the responsories, were sung in plainchant or spoken. This placed the responsories in rich and stark contrast with the plainer plainchant and spoken word.

The present release is not the responsories on their own. For the first three responsories for each day there are readings from the Book of Lamentations, sung in plainchant, with the responsories intervening as they should. The other readings traditionally given are left out in the interest of time. That said, this recorded performance provides enough evidence of the original setting for appreciation. The responsories are richly expressive in the composer's most developed method, densely chromatic and polytonal. Gesualdo pushes the creative envelope, interpolating jarring harmonic shifts and alternating between elaborate polyphonic writing and more homophonic passages. The tempi are predominantly slow and thoughtful. The composer made an effort to articulate closely to the text.

The responsories are works for professionals. Director Björn Schmelzer and his ensemble Graindelavoix are equal to the task, with a discography including works by Orazio Vecchi (1550-1605); Jean Hanelle (c.1380— c.1436); and Guillaume de Machaut (c. 1300-1377) preceding this one. Recorded appropriately in a church, Beaufays (Église de Saint-Jean l'Évangeliste), Belgium, dating from the 12th Century, the sonics and ambiance are warmly inviting. The voices are captured with plenty of space between them. The performance is beautifully dedicated and powerful. Maestro Schmelzer directs with a liberal hand, allowing his merry band enough leeway to give an exemplary performance. Organic and real, these performances are arresting. —C. Michael Bailey