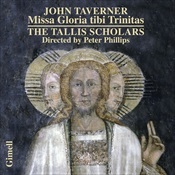 Peter Phillips chose the famous mass by the father of Tudor composers, John Taverner, to celebrate the 40th anniversary of the Tallis Scholars (who first appeared on the program 32 years ago).

NOTE: All of the music on this program is from the new recording of the Missa Gloria tibi Trinitas by John Taverner (c.1490-1545). It is in celebration of Peter Phillips and the Tallis Scholars' 40th anniversary, and is CDGIM 045 on the Gimell label. For more information:

"I chose to celebrate our 40th year with Taverner's Missa Gloria tibi Trinitas because I believe it to be one of the greatest compositions ever to have been written in England - a perfect ambassador for the repertoire we have made our own. It is also spectacularly difficult to sing. I felt there was no better piece to show-case what The Tallis Scholars have achieved in their 40 years of dedication to polyphony: a summation of Taverner's art as well as our own."

Taverner's Missa Gloria tibi Trinitas counts as one of the greatest pieces of music ever to have been written in England. If one thinks of the melodic beauty of a Britten opera, the variety contained in an Elgar symphony or the sheer invention of a Purcell anthem, Taverner matches them at every point. Not only is his grasp of all the techniques available to him faultless, in this work, and especially in its ‘in nomine' section, he also set the scene for several generations of composers to come.

It is a monumental challenge for its six voices - treble, mean, two countertenors, tenor and bass - to perform. With its exceptionally wide-ranging voice-parts, little else taxes its interpreters as Taverner does here. The challenge is partly in the tessitura - the trebles go unusually high; both countertenor parts range unusually widely from top to bottom of their ranges; and although the means, tenors and basses are more normal, it requires constant sensitivity to maintain the necessary balance between all six parts. And of course there is a challenge in the sheer virtuosity of the writing. The final passage of the Gloria is an example: who else would have thought of those thrilling scales, building and building to the final cadence? Not Fayrfax - or Josquin.

A further challenge comes in the way Taverner liked to construct his sections over breathtakingly long spans. To master these the performers need to understand not only how to phrase each small component motif - that is straightforward - but also how he fashioned them into prolonged sequences, which many bars later build to a final cadence. The most sustained example of this is in the last twenty-five bars of the first Agnus; the most action-packed is the bass-generated ‘descendit de caelis' in the middle of the Creed. But Taverner was also interested in maintaining coherent musical arguments over long passages without the consistent use of motifs - the ‘in nomine' of the ‘Benedictus' is a classic example.

The subsequent fame of these fifty-six bars has never been fully explained, but it must have come in the first instance from their intrinsic beauty, which itself comes from how artlessly Taverner held his material together. The Gloria tibi chant is quoted without interruption in equal note-lengths, so every listener can clearly hear it. Sung by the means - the second voice down - it sets a timeless mood, the epitome of calm, as the other three voices wind round it, coming and going seemingly on a whim. Nothing could be less demanding, nor more detached from its surroundings - a point of repose in an otherwise busy world, which the following Hosanna quickly returns us to.

The presence of a chant dedicated to the Trinity suggests that the Mass was originally composed to be sung on Trinity Sunday, though it is just as possible that it was simply written for a foundation dedicated to the Trinity. This was in fact the case with both of Taverner's main places of employment before 1530 - Tattershall Collegiate Church and Cardinal College (later Christ Church) Oxford - which means we have no certain evidence of where the Mass was first performed. However since the setting is the first item in the Forrest-Heyther part-books, which have always been associated with Cardinal College, it seems likely that he wrote it there. The chant is quoted twice in all the movements (except the Sanctus, where it occurs three times, thanks to the ‘in nomine') according to a repeating pattern: once, interrupted and in very long notes, in the full sections; and then once in punchy short notes in all the final sections, always in the mean. These final sections seem to be turbo-powered by their chant notes - ‘Et exspecto' at the end of the Credo is an example - though the ‘dona nobis pacem' at the end of the Agnus, with its lilting triple-time, is a beautiful exception.

If Taverner was at Cardinal College when the Mass was copied, he might well have overseen what was written down, and indeed this original does seem to be unusually accurate. It is a pity the Forrest-Heyther part-books do not contain Taverner's brilliant set of Magnificats, since the only one which is complete is the four-voice, and that comes from a manuscript which dates from thirty years after his death. The five-voice lacks its second tenor part throughout, and the six-voice its treble for much of the time. In fact, however, these omissions hardly seem to dent the achievement of Taverner's settings: partly because the tenor part in the five-voice can be largely supplied from chant; partly because the treble part in the six-voice is original in the last section, where the coloratura writing really hits its stride; and partly because Tim Symons, our editor, has done a superlative job in writing the missing notes.