You are here: Home / Playlists / Hail Was they First Greeting–Blue Heron: Music from the Peterhouse Partbooks

NOTE: all of the music on these two programs comes from the work of the Blue Heron Renaissance Choir directed by Scott Metcalfe. For more information on this excellent ensemble and this project, you may check their web site:

I. Music from the Peterhouse Partbooks, vol. 3 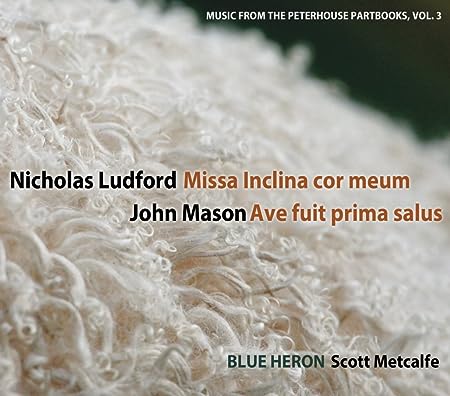 Blue Heron is committed to a long-term engagement with music from the Peterhouse partbooks, a set of manuscripts now belonging to Peterhouse, Cambridge, which contain an extensive and mostly neglected repertoire of pre-Reformation English polyphony, much of it of superlative quality, by the most famous composers of the day as well as a host of unknown masters1. The Peterhouse partbooks contain forty unica (works surviving in one unique source) and about a dozen other works whose concordant sources are imperfect. Because the tenor partbook and several pages of the treble book of the Peterhouse set are lost, the consequence is that these more than fifty works—masses and antiphons on a grand, late-medieval scale—have gone virtually unstudied and unperformed in modern times. For providing a remedy to this situation, we are indebted to Nick Sandon, recently retired from the University of Exeter in England, who has devoted three decades to the subject. Professor Sandon’s dissertation2is the standard work on the partbooks and their music, and he is currently in the process of publishing his brilliant and idiomatic reconstructions of the incomplete Peterhouse music in Antico Edition.

The Peterhouse partbooks were copied around 1540. Sandon suggests that they may have been prepared by a scribe at Magdalen College, Oxford, for use at Canterbury Cathedral, which was refounded in 1541 as a secular cathedral following its dissolution in 1540 as a monastic institution. The repertoire of the partbooks has long posed a challenge to those writing the musical history of England in the years just prior to the Reformation, for Peterhouse’s lengthy Marian antiphons and festal masses are written in a florid, highly melismatic style that scholars have claimed was obsolete in these later years of Henry VIII’s reign. Sandon argues in his dissertation that the content of the Peterhouse partbooks, which constitute the single most important source of polyphony from the decades before Reformation, must force scholars to reconsider their view of what sort of music and texts were then in use. Because so much of the Peterhouse repertoire is incomplete, however, scholars have largely avoided serious study of the music; performers have likewise been unable to engage with it. Sandon’s reconstructions now make performances of this repertoire possible for the first time since the tenor partbook disappeared centuries ago. Professor Sandon has commented about Blue Heron’s project, “The idea of a highly skilled choir recording a lot or all of the [Peterhouse] music is extremely attractive; it would make possible a quite radical re-interpretation of the achievement of English composers during the period 1500-40.” Indeed, hearing this gorgeous music sung is certain to catalyse interest among both scholars and performers in a way that no dissertation or edition can ever do.

Blue Heron’s involvement with the Peterhouse repertoire dates back to our debut concert in 1999, a program featuring several works from Peterhouse, including the votive antiphon Ave Maria dive matris Anne by Hugh Aston. This astonishingly beautiful piece particularly caught our fancy and we subsequently devoted a good part of our inital activity to Aston’s sacred music. This consists of seven works: two masses (one in five parts and one in six) and five antiphons, three of which survive solely in Peterhouse and are thus incomplete. (The orphaned treble part of an eighth vocal work also exists, as well as a few instrumental pieces and an incomplete anonymous mass which may be by Aston.) Aston’s music was a wonderful place to start: his is a highly distinctive, skilled, and expressive voice which has scarcely been heard since the sixteenth century. Professor Sandon describes him as “an outstandingly gifted composer,” on a level with better-known figures like Taverner and Ludford.