You are here: Home / Playlists / Luther & the Reformation—the 500th

October 31st makes the actual date of the Reformation, and we conclude our year-long series with recordings that take us from Schutz to Bach. 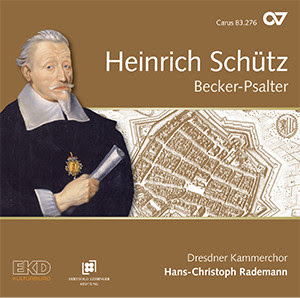 From Amazon.com: I have been looking for a recording of the Becker Psalms for decades. These works are not lavishly scored concerti for antiphonal choirs and instruments, such as the Psalmen Davids of 1619. Rather they are versified Psalms intended for congregational singing. Hymns, basically; though their melodic and rhythmic patterns are distinctively Schützian--that is, lively, complex, and hauntingly beautiful. A judicious selection is presented here. corresponding with the particular Psalms set in the 1619 Psalmen Davids, an editorial decision that enables listeners to make some fascinating comparisons and contrasts between the two collections. Rademann scores successive strophes in various ways--full vocal ensemble and different solo voices, with continuo support and occasional instrumental doublings. He secures disciplined and expressive contributions from vocalists and instrumentalists, all well-versed in historically-informed performance practice. Since these works will be terra incognita for most listeners (though a few of the chorale tunes will be familiar from other sources--such as "Aus tiefer Noth, schrei ich zu Dir"), and since the only prior recording of which I am aware is an ancient Vox LP with the Gregg Smith Singers (not complete), this significant issue should be welcomed with thankful "hearts, hands, and voices." If you love the music of Schütz, or have an interest in the history of Protestant hymnody (an art form whose vanishing from church services is one of the great tragedies of our age), do not hesitate to obtain this superb recording. 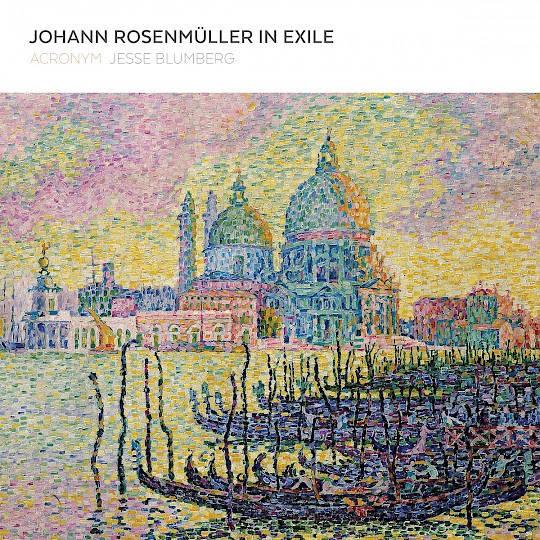 Composer, trombonist, organist, and teacher Johann Rosenmüller was born and died in Germany but spent much of his life exiled in Italy. He began his education at the Lateinschule in Oelsnitz, the city of his birth, and he graduated from the University of Leipzig, where he studied music and theology and was later hired as a teacher. Rosenmüller was promoted at Leipzig’s Thomasschule by 1650, and he was appointed organist of the Nikolaikirche the following year. He published prolifically during this period, printing more compositions than any other composer in Leipzig. The city council assured Rosenmüller that he would be the next Thomaskantor—one of the most prominent posts in Germany, later held by J. S. Bach—but before the position became vacant, Rosenmüller’s career imploded due to his arrest with several schoolboys in 1655 after accusations of sodomy. Following his escape from prison, Rosenmüller eventually made his way to Venice, where in 1658 he found employment as a trombonist at San Marco. By 1660 he had achieved renown as a composer in Italy, teaching students such as Johann Philipp Krieger (whose Sonata a4 was featured on ACRONYM’s Wunderkammer recording). From 1678 to 1682, Rosenmüller held the position of composer at the Ospedale della Pietà, the orphanage and school that would employ Antonio Vivaldi several decades later.

The vast majority of Rosenmüller’s vocal music is sacred and sets German or Latin texts. He likely composed most of the Latin-texted works while in Venice, since they generally reflect Italian and Catholic liturgical practices and musical styles. Nevertheless, they survive largely in German manuscripts, because Rosenmüller sent many of these compositions to contacts in Germany, likely in attempts to secure employment. He modeled many of these works on the secular cantatas of Italian composers such as Carissimi and Cesti, incorporating Italian operatic and instrumental compositional elements. Rosenmüller begins each cantata included on this recording with a brief sonata followed by aria sections alternating with recitative, occasionally interspersed with instrumental ritornelli. These cantatas are found in Berlin in a manuscript collection (D-B Mus.ms. 18883) of thirty-five solo cantatas—most of them unique, unpublished and unrecorded—copied by many hands and compiled in 1700. The four cantata texts consist of Latin devotional prose and poetry. Their provenance is unknown, but they reflect the religious context of Rosenmüller’s Venetian residence and Leipzig education; although they are influenced by Catholic mysticism prevalent in Italy, their emphasis on Christ reveals a fundamental interest in the Lutheran orthodoxy dominant in much of Germany. 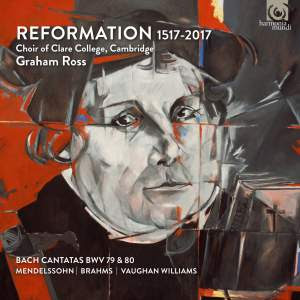 In 1517, indignant at mercenary practices of the Catholic Church and convinced that a public debate was needed to restore faith in the founding texts of the Bible, Martin Luther nailed his 95 Theses to the door of the church in Wittenberg Castle. This marked the beginning of the Protestant Reformation, of which he was a seminal figure, which was to spread all over Europe.

Five hundred years later, in 2017, Graham Ross and the Choir of Clare College, Cambridge marked the anniversary with a series of cantatas by J. S. Bach performed liturgically in Clare College Chapel on the eight Sundays of Lent Term. This recording is the culmination of that project, presenting chronologically the two great Reformation cantatas of J. S. Bach and three chorale-based works by Mendelssohn, Brahms and Vaughan Williams, each preceded here by the chorale melody or hymn on ̀which they are based, giving an insight into the emotional and dramatic strength of the Reformation's theological and cultural legacy.

O God, our Help in Ages past

Now thank we all our God (Nun danket)