You are here: Home / Playlists / Music for St. Katherine of Alexandria

Andrew Kirkman and his Binchois Consort are back with an amazing look at the 15th century English cult of St. Catherine, a revival inspired in part by Henry V’s marriage to Katherine de Valois.

NOTE: All of the music on this program is features the ensemble The Binchois Consort directed by Andrew Kirkman. The recording is on Hyperion and is CD CDA68274. For more information about this ensemble: https://www.binchoisconsort.com/ 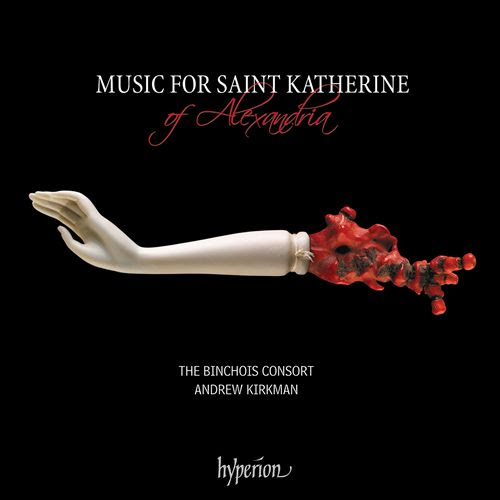 Saint Katherine of Alexandria—best known to most of us today via the firework ‘Katherine Wheel’—was one of the most popular and widely venerated saints of the high and later Middle Ages. She enjoyed a reputation as a virgin martyr with a dramatic, colourful and unusually detailed vita, all of it thought to be legendary (her liturgical presence was to a great extent ‘edited out’ of the Catholic books in the Roman Breviary revision of 1960/61). The earliest historical witnesses to Katherine do not occur until some four centuries after her supposed martyrdom; yet the power of her cult in the West from the mid-eleventh century was immense and long-lasting. The tales of her character, of her qualities and accomplishments, and of her life and martyrdom (passio) ensured for her an enduring reputation throughout Europe and stretching far beyond, to the Catholic New World.

Katherine’s body was reputed to have been miraculously translated, in an incorrupt state, to the mountain next to Mount Sinai by a flight of angels. From here, where it was discovered in the ninth century, it was transferred to the sixth-century monastery on Sinai itself, which to this day bears her name (though its foundational dedication was, and remains, to the Transfiguration). Subsequently, legends recounting the arrival of her cult in the West have often involved a pilgrimage to Sinai and a return journey westwards bearing prize relics by a devout monk who is often credited with devotional and liturgical texts in her honour.

Katherine’s eminence as a saintly figure gave popularity to her name within all strata of society, and called forth devotions of great richness and variety. She was seen as having a wide range of exemplary virtues, being pious, learned, compassionate and courageous (as well as, obviously, beautiful and noble); and the legend (dating apparently only as far back as the fourteenth century) of her mystic marriage to Christ gave her a particular cachet, and a special role as patron of marriage.

But it was her royal lineage that most likely explains the rise of her cult in England, and indeed, ultimately, the existence of many of the pieces on this recording. The transmission of finger bones of the saint to Rouen in the eleventh century seems to mark her first foray into Europe; and while there is some evidence of English veneration of Katherine before the Norman Conquest, the accelerated propagation of her cult in England after 1066 can most obviously be traced to the importance of these relics in the Norman monarchs’ ducal homeland.

Once established as a focus of royal veneration Katherine was here to stay. A prominent early patron was Henry III, who, besides naming one of his daughters for the saint, ordered the fashioning of numerous expressions of devotion including two painted panels for the chapel of St Katherine at Nottingham Castle. But it was with the accession of the first English Queen to bear the name Katherine that the saint assumed her central position on the English political stage. Key images from Katherine’s legend occupied a powerful symbolic presence at the banquet to mark the English coronation of Henry V’s French royal spouse, Katherine de Valois, on 23 February 1421; and scholars have proposed that an important late version of a prose life of St Katherine—significantly an early English witness to the legend of her mystic marriage to Christ—was written in celebration of the royal nuptials. Certainly Katherine’s holy wedding to Christ made for an obvious and propitious analogy to this earthly marriage between England and France, a planned resolution of the 100 Years’ War.

Royal propagation certainly did much to enhance awareness of Katherine among the population at large, and while her story was a late arrival to England compared to that of other virgin martyrs, her popularity spread to exceed that of all the rest of them put together. While other virgin martyrs are described as brides of Christ, Katherine’s vita is unique in embracing an actual marriage ceremony, attested by the gift of a ring. This episode is one of a number of additions to her legend that accrued continually from the thirteenth to the fifteenth century, making her a figure more adaptable and receptive to changing needs than her fellow martyrs, most of whose vitae remained essentially stable.

Besides her royal blood, Katherine was marked out by special holy favour. In addition to her mystic marriage to Christ, her body was reputedly transported to Mount Sinai by angels. Convenient also for propagation of her name was the endless supply of holy oil notionally exuded by her bones, making for a potentially inexhaustible supply of relics. And in an age whose souls had a similarly inexhaustible need for heavenly intercession, Katherine’s supposed entreaty to Christ at the point of her death to answer the prayers of those who remember her martyrdom and invoke her name garnered special attention.

Among her many attributes Katherine was unique also in her erudition, having bested in debate the fifty most eminent philosophers of the realm of Maxentius (Rome’s last pagan emperor) in defence of Christianity. Fittingly she thus became the patron of scholars and of education more generally. While no images from late-medieval England attest to her mystic marriage, there is strong evidence that she was seen also as a powerful marriage broker, not just to the royal houses of England and France but across the social spectrum. John Capgrave’s mid-fifteenth-century Life of St Katherine, one of an exceptional number of vitae of the saint, states that, besides the Virgin Mother herself, Katherine was the most important saint in medieval England, with only Margaret even approaching her among virgin martyrs.

It is thus unsurprising to find her represented in an exceptional number of surviving contemporary depictions. Among these, almost sixty alabaster panels and more than thirty standing figures make her, next to the Virgin, the most extensively depicted saint in this medium. Like the contemporary English music which must frequently have been sung directly to images of the saint, her alabaster likenesses travelled far and wide from their English origins. Similarly exceptional is the extent of polyphonic music dedicated to her name, with the result that she is the only saint (again with the exception of the Virgin Mary) to have spawned enough surviving English fifteenth-century pieces to fill a CD recording.

Our programme offers a vivid snapshot of the type and range of music for Saint Katherine available in England in the early-to-mid fifteenth century, in the heyday of the first maturity of English polyphony, as also of the still-developing alabaster tradition. Our centrepiece is the Mass for three voices by Walter Frye (d1475) composed on the plainsong Nobilis et pulchra, the first responsory at matins on Katherine’s feast (25 November). The tenor voice carries a rhythmicized version of this generally low-lying chant, and is complemented by an elegantly shaped discantus line (sung by altos) and a freely composed contratenor line (sometimes working melodically as a kind of second, but lower, melodic part, sometimes as a neatly devised contrapuntal adjunct). Despite differences of detail, the overall approach and effect are broadly similar to the kind of writing found in the anonymous Missa Quem malignus spiritus (recorded by The Binchois Consort on Music for Henry V and the House of Lancaster).

The Frye Mass movements are offset and enriched by a variety of motets and chants by Dunstaple and others, and an individual anonymous Mass movement of earlier date—a setting of the Gloria on another famous Katherine responsory chant, Virgo flagellatur. This work, which survives incomplete in a Cambridge manuscript (just its tenor and around two-thirds of its contratenor remain), has been reconstructed for this recording by Philip Weller. Its responsory tenor is also partially shared with the glittering motet En Katerine solennia, based on the chant’s verse ‘Sponsus amat sponsam’. The style of this grand isorhythmic piece and the text of its antecedent chant (‘The bridegroom loves the bride’) encouraged Manfred Bukofzer to suggest that it may have been composed for the wedding in 1420 of Henry V and Katherine de Valois. Whatever the occasion, it seems safe to suggest that the genesis of this work, housed in the royal ‘Old Hall’ choirbook, hails back to a royal occasion of substantial pomp and circumstance and high dynastic significance.

The same can surely also be said of Dunstaple’s grandly conceived motet Salve scema sanctitatis, likewise fashioned on systematic repetitions of a portion of the Virgo flagellatur chant. The choice here fell on the section of chant setting ‘Cantant celi agmina laudes’ (‘The heavenly hosts sing praises’), hence joining the singers’ praise of the martyr saint with that of the heavenly choirs whose company she was destined to share. The more intimate, gentle tone of the same composer’s Gaude virgo Katherina would surely have fitted it ideally to votive devotion before an image of the saint, probably in a side chapel.

Likewise at the more modest end of the musical scale stand the two Mass movements by ‘Driffelde’, putatively the ‘Robert Dryffelde’ who was a vicar-choral of Salisbury Cathedral from 1424 to 1468. Though not specifically dedicated to St Katherine, the two movements, which have much material in common, are based on a responsory and verse for the feast of a virgin, and hence are certainly applicable to devotions to our featured saint. Finally, with the settings of the two foundational chants Nobilis et pulchra and Virgo flagellatur in the simple, improvised idiom of faburden, we offer a taste of the kind of basic, formulaic chant-based idiom that would surely have been the most frequent and familiar form of polyphony to the experience of fifteenth-century worshippers.

The cult of Saint Katherine may no longer be practised so widely in the West, but it remains important in the Orthodox East (where she is still venerated as one of the Great Martyrs and a powerful Holy Helper), most especially on Sinai itself. And so her presence lives on, not just in narratives and prayers but above all in visual images of many kinds—in both the Western pictorial and the Eastern iconic tradition. Her music, too, can conjure up in poetry and inspiration what her story may lack in historical certitude. It offers us—not least in combination with precisely those many images—a perhaps fleeting and only momentary object lesson in poetic vividness and poignancy: something transient, but all the same eloquent and repeatable.