You are here: Home / Playlists / New from ECM

Recent releases from this often experimental label give us some contemporary takes on music from the past, including Gesualdo, Machaut, and music from the Armenian tradition.

NOTE: All of the music on this recording is from recordings on the ECM label. For more information, you may visit: 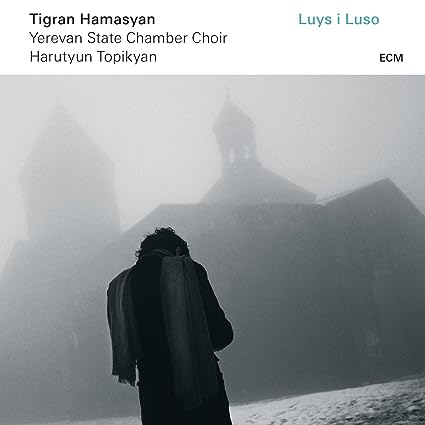 For his first album on ECM, pianist Tigran Hamasyan is joined by the Yerevan State Chamber Choir in an exploration of Armenian sacred music spanning from the 5th century to the 19th.

Such a project on this label immediately evokes thoughts of Jan Garbarek and the Hilliard Ensemble’s landmark recording Officium and its sequels; however, although similar in principle, Hamasyan's album takes us on a completely different journey.

From its beginning Luys i Luso (Light from the Light) is imbued with an ethereal quality, an otherness born of twisting and turning modes and the melodic decorations of Cilician holy music. Such ornamented lines can be heard in the opening solo piano track, Ov Zarmanali, which lasts only ninety seconds and is brought off so delicately that it feels like it was never really there at all. Like many melodies on the album, this one returns later - as a thirteen minute odyssey complete with choir - captured in a different form and heard from another perspective.

In many ways Hamasyan’s disc echoes the work of the great Komitas Vardapet, one of the first to collect and catalogue traditional Armenian folk songs. Komitas’s story is particularly tragic: a composer, priest, brilliant scholar and ethnomusicologist, he was arrested and imprisoned during the 1915 Armenian genocide and suffered a mental breakdown, living out the rest of his life in psychiatric hospitals.

A number of sections from Komitas’s Armenian Holy Mass feature on this album. Orhnyal e Astvats, the closing track, begins with an old recording of the melody, which is then subsumed into the modern day by the Yerevan choir, whilst Hamasyan adds elegant phrases on top. Shot-through with otherworldly beauty, it’s hard to imagine a more perfect ending.

The unique spirituality of Luys i Luso will be brought to different sacred spaces across Europe over the coming weeks, as Hamasyan takes the project on tour. Let's hope the live experience is just as magical as the recordings on this disc. 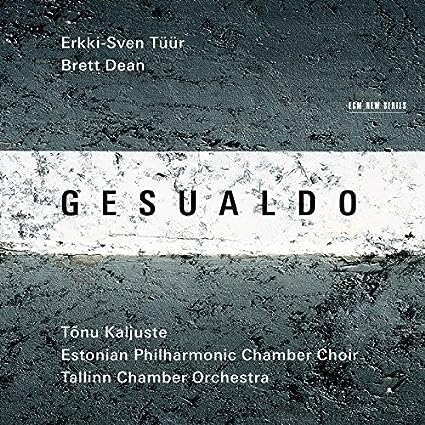 This absorbing project finds Australian composer Brett Dean and Estonian composer Erkki-Sven Tüür drawing inspiration in very different ways from the music, life and times of Carlo Gesualdo, and juxtaposes these reflections with Gesualdo’s own music. Dean’s Carlo (composed 1997) begins with pure Gesualdo from the 6th Book of Madrigals, then gradually enters a very 20th century sound-world. Through use of both sampled and real-time voices as well as increasingly intense strings Dean paints an hallucinatory picture of the Prince of Verona’s state of mind as he is driven toward his violent crimes of passion. Erkki Sven Tüür’s L’ombra della croce references the Gesualdo motet O crux benedicta from the Cantiones sacrae, and Gesualdo’s piece is also heard in an arrangement for strings by Tüür. The programme is completed by Tüür’s Psalmody.

From Gramophone: If you’re casting around for musical inspiration, you could do a lot worse than Carlo Gesualdo. A 16th-century prince and a composer, he is best remembered as a double-murderer – infamously stabbing his wife and her lover after discovering them in flagrante. It was the grief and penitence which followed that fuelled the composer’s extraordinarily chromatic vocal writing – convulsions of disjunct melody and harmonic lurches that find no equal for several centuries.
Thoughtfully programmed, in characteristic ECM style, this disc from Tõnu Kaljuste, the Tallinn Chamber Orchestra and the Estonian Philharmonic Chamber Choir takes Gesualdo’s motets and madrigals as a starting point, pairing Kaljuste’s own arrangements of ‘Moro lasso’ and ‘O crux benedicta’ for string orchestra with Brett Dean’s Carlo (1997) – a tone-poem for chamber orchestra, reimagining both Gesualdo’s music and the ‘fateful night’ of the murders – and two works by Erkki-Sven Tüür.

Both Kaljuste’s orchestra and his instinct are good ones; the insistent suspensions of Gesualdo’s vocal writing – not so much sliding as grinding over one another – translate beautifully for strings, muted and thickly scored in close imitation of a viol consort. They offer a point of departure for the Dean, whose verbatim musical quotations of the start quickly dissolve into fragments of melody and sound, song giving way to whispers and breaths, counterpoint to a clattering Babel of unfinished musical thoughts.

Written especially for the album, Tüür’s L’ombra della croce is altogether more affirmative, borrowing its mood and opening motifs from Gesualdo’s motet ‘O crux benedicta’. Thick strings cushion Gesualdo’s sharper edges, a soft-focus approach to the past also found in Tüür’s Psalmody, an attractive, rhythmically charged neo-classical fantasy for strings and voices, but one which – at over 20 minutes – rather overstays its welcome, despite carefully shaped performances. 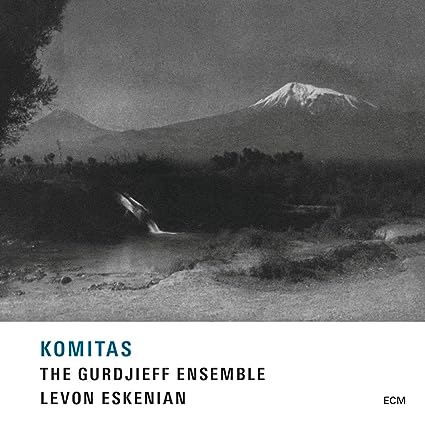 The Armenian Gurdjieff Folk Instruments Ensemble was founded by Levon Eskenian to play ‘ethnographically authentic’ arrangements of the G.I. Gurdjieff/Thomas de Hartmann piano music. Their debut album on ECM, Music of G.I. Gurdjieff, was widely acclaimed, and won an Edison Award as Album of the Year in 2012. Now Eskenian and his musicians turn their attention to the music of Komitas Vardapet (1869-1935). Composer, ethnomusicologist, arranger, singer and priest, Komitas is popularly held to be the founder of contemporary music in Armenia, and in his work as a collector he explored the connections that uniquely bind together Armenian sacred and secular music. With their special focus on folk instrumentation and inspired arrangements the Ensemble illuminates the deep roots of Komitas’s compositions in this programme recorded in Lugano in February 2015.

From All About Jazz: When Armenian arranger and composer Levon Eskenian took on to reimagine the music of Armenian mystic and philosopher Gurdjieff for the Gurdjieff Ensemble's debut record on ECM, he touched upon the wealth of melodies that Gurdjieff initially heard and was inspired by during the travels he undertook during his lifetime through the Caucasus, the Near East and Central Asia, and eventually were hummed to pianist Thomas de Hartmann. And it was Eskenian's fertile imagination, deep knowledge and understanding of both Gurdjieff's music and the music he was inspired by during his journeys that eventually led to him reshaping these melodies colorful arrangements for a full orchestra. His arrangements were sensitive and loyal to the original melodies but he took the overall music somewhere else, much closer to the original sounds. Basically he reversed the process from melodies on the piano to a full orchestral score. characteristic imagination Eskenian has taken the same approach of reversing the process of piano compositions by renowned Armenian composer, ethno-musicologist and priest Komitas Vardapet who lived at the turn of the 20th century into pieces arranged for the Gurdjieff Folk Instruments Ensemble. Komitas is considered to be a national saint in Armenia and father of Armenian music. Much like Hungarian composer Bela Bartok, he also took folk music from his country and incorporated its characteristics in order to develop a national musical style. As can be read from the liner notes, Eskenian has been navigating himself through Komitas' writings where he is mentioning the use of certain instruments. According to the album's very detailed and informative liner notes, Komitas was also taken as a reference point by de Hartman when he was arranging Gurdjieff's music for the piano. Since Komitas' writing had an influence over Eskenian's approach towards re-imagining Gurdjieff's music, it seems that in a way, the music on Komitas has come a full circle.

Yet, for all the apparent and obvious historical leanings, the music here is not a mere scholarly treatise. The arrangements are used as a signposts where improvisations also take part in order to elevate these 18 tracks to a different plateau. Eskenian and his Ensemble are taking a wondrous journey through the music and the world of another musical mastermind and again the breadth and depth of their artistry which is expressed throughout this magnificent collection is absolutely colorful, emotional and mesmerizing. The result to this is rich and deep musical story telling which finds this able ensemble journeying deep into the works by this renowned composer and through his works into their country's vast musical treasures.

The whole album feels like a complete whole and each track feels like series of movements. Along the way, this ensemble is running a fascinating gamut of moods and colors. Imbued with intimate arrangements, the moods shift from quiet introspections, as the opening tracks such as "Zula" or "Tsaghik Asem, Mani Asem" to "Havun" is a poignant duet for two doudouk flutes, where the individual or paired instruments resonate deeply with their overwhelmingly heart-rending and mournful tone. This deep and meditative mood is disrupted with tracks such as "Msho Shoror" or "Mankakvan, Nvag XII" with the loud zurna coming to the fore. "Lorva Gutanreg" is a beautiful mediation on pough, a wooden flute which simple melodies produce feelings of yearning. "Yot Par" or "Seven Dances" is a seven part suite where each piece is tied to a city in Armenia where they originated from. The music unfolds slowly and dramatically, where the musicians achieve a deep and intimate communion as their instruments mesh together. "Hov Arek" (Dear Mountain Send me a Breeze) is a traditional song and the only one to feature a vocal. The whole set end with a very tender and emotional track "Akna Oror" where two duduks intertwine gently together and minimally supported by santur.

There are many transcendental moments on this recording. Drawing on Armenia's vast legacies of both religious and secular musics, these different strands both meet and mesh together on this record. As on most ECM releases this music also invites contemplation, and more than that, it provides a path into finding a deeper aspect of oneself. Komitas is an outstanding achievement both for its depth and the way musicians interconnect inside the music. These 18 songs are truly united in a tidal wave of sounds, history, emotions and mystery.