New recordings of works by Caldara, Alessandro Scarlatti, and the recently edited work by the monk Sisto Reina.

Sisto Reina is one of the many musicians from the Order of the Friars Minor Conventual who have greatly enriched the history of music. The diffusion of his music greatly exceeded the boundaries of the regions in which he was active: works of his are present in the archives of several Italian cities, and in Austria, Germany, Poland, Switzerland and England. The Armonia ecclesiastica, by Sisto Reina, published by Carlo Camagno in Milan in 1653 and dedicated to princess Angelica Luigia Mariana Gonzaga, nun in the convent of S. Paolo in Milan, is exemplary as regards the variety of forms, styles and languages that were typical of Italian seventeenth-century music, particularly in Lombardy. Michelangelo Gabrielli, Renaissance and Baroque repertoire specialist, directs the Concentus Vocum ensemble (from the Como Conservatory of Music) bringing this work to light in a world premiere recording 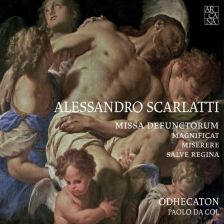 From Gramophone: Alessandro Scarlatti’s Missa defunctorum (1717) has never been recorded before, although it was performed at Stravinsky’s funeral in 1971. A stile antico Requiem Mass in D minor, four-part choral lines are accompanied only by subtle continuo (violone, theorbo and organ). Odhecaton’s all-male choral ensemble is captured on beguiling form in the ideal acoustic of the Oratorio degli Angeli Custodi in Lucca. Falsettists on the soprano part sometimes pinch a few of their highest notes very slightly, but the interweaving voices produce an attractive juxtaposition of density and transparency. Texts are declaimed crisply yet sensitively, melismatic vowels possess compassionate luminosity, and plangent contrapuntal contours illuminate Scarlatti’s harmonic chiaroscuro.

The highlight is the chromatically charged ‘Lacrimosa’, its exquisite dissonances and harmonic twists redolent of Gesualdo. The addition of two concertante violins and use of four solo voices throughout an eloquent Salve regina (probably first published 1697) not only demonstrates Scarlatti’s facility in progressive stile moderno church music but also serves as an entremet before a rapturous unaccompanied Miserere for double choir: sung by the Capella Sistina on Maundy Thursday in 1708 and preserved in the Vatican library, allegedly the papal choir disliked Scarlatti’s complex refrains and thereafter discarded it in favour of the customary Allegri (by then about 60 years old). Odhecaton are on their most scintillating form in a five-voice Magnificat that flows between contrasting solo ensemble verses (including female sopranos), animated choral passages and independent continuo bass-lines that collectively invoke an appealing fusion of Palestrina, Monteverdi and Lotti.

For their first CD, the Vokalakademie Berlin and its director Frank Markowitsch took to the music of Alessandro Scarlatti (ROP6062). Likewise, they follow the tracks of another baroque-era Italian for their second production: a composer in the service of the Vienna court, the Venetian Antonio Caldara enjoyed the highest reputation and had all the freedom a composer could wish for.

His legacy includes more than 3500 works that are evidence of the vast musical diversity of this late-baroque master. Many of these pieces have almost been forgotten. The Vokalakademie Berlin has set out to change this fate and, once again, explores a musical niche with their CD “Salve Regina”. A collaboration with the Bassano Ensemble Berlin, it features sacred solo cantatas alongside polyphonic 16-part choir music, virtuoso arias and sonatas that display aspects and different periods of Mary’s life and their praise in Caldara’s music in an intimate and colorful fashion.