You are here: Home / Playlists / Swithun!

Katarina Livljanic and the Dialogos Ensemble’s latest project gives us a tale of “Demons and Miracles from Winchester around 1000,” dedicated to the 9th century Anglo-Saxon St. Swithun, this week.

NOTE: All of the music on this program is from the recent recording by the Dialogos Ensemble directed by Katarina Livljanić. Entitled Swithun!: Demons and Miracles from Winchester around 1000, it is on the Arcana label and is CD A491. For more information about Dialogos: https://www.ensemble-dialogos.org/en/ 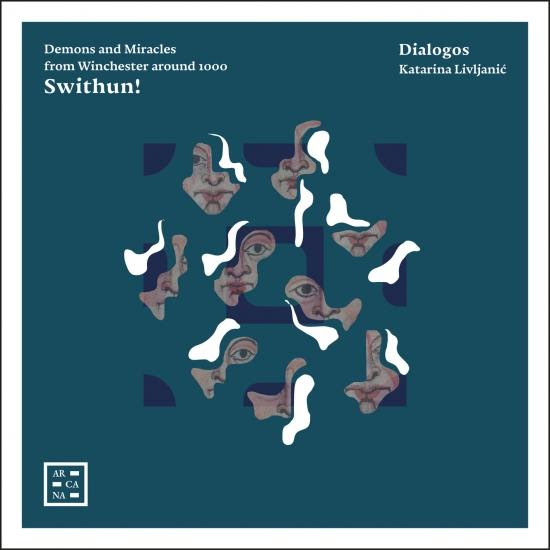 Open the door onto one of the best-kept secrets of medieval music… It is the music from the Winchester Troper, one of the earliest, and most stunning sources of medieval polyphonic music, written in the first decades of the eleventh century, more than two centuries before the manuscripts of Notre-Dame polyphony. Without the existence of this repertory, our vision of music history would have been entirely different, and much poorer. Ensemble Dialogos offers a musical creation, placing the polyphonic music of tenth- and eleventh-century Winchester in a dialogue with virtuosic improvisations, while telling the story of a man haunted by visionary and terrifying dreams, as he tries to escape from three raging naked Furies, and finally finds salvation through Saint Swithun, a medieval Anglo-Saxon Superman. As you prepare to discover an unknown musical repertory from medieval England, you will be drawn into a stunning story about demons, dreams and miraculous healing, wondering whether the music you are listening to is archaic or incredibly modern.
From MusicWeb International:  The world is none the worse for the permanently delayed release of my planned MPhil dissertation on the revival of learning in England, and especially in its then capital, Winchester, between the time of King Alfred and the Regularis Concordia, the Benedictine Reform, but I venture to suggest that listeners will be greatly enriched by this new recording of music associated with the Cathedral’s saint, Bishop Swithun, taken from the accounts of his life by Wulfstan of Winchester and by Abbot Ælfric, one of the figure-heads of the revival of learning, usually known as Ælfric of Eynsham, a former pupil of the main figure behind the revival, Bishop Æthelwold and the Winchester Troper which preserves chants designed for use in the Minster, as Winchester Cathedral then was, around the time of the revival, c.1000.

Contrast the superb music in the troper with King Alfred’s gloomy picture of the state of learning in England a hundred years earlier, when the understanding of Latin seemed almost to have died out, or even with another (Bishop) Wulfstan’s Sermo Lupi ad Anglos, his scathing letter to the English about their backsliding into ignorance and heathen ways, this time from around the year 1000, and the quality of the music in the Troper is amazing: there’s even one text in Greek in this collection. (Apologies that the Greek has not come out quite right in html.)

The well-known belief that any rain on St Swithun’s day betokens rain for a further 40 days is only a small part of the saint’s legend. It applies only if it rains on Winchester bridge, and it arose from the decision to bring Swithun’s body into the Old Minster, the rain apparently indicating that he preferred to remain outside. Oddly, very little is known about the life of Swithun, so the accounts of his ‘life’ are actually concerned with what happened after his death. He’s not known to have been especially bothered by demons, like St Anthony, so the subtitle of this CD is something of a catchpenny. Many miracles, however, were associated with him, some of them included in this programme, including one where he healed a man smitten by three Furies. Abbot Ælfric of Eynsham’s Lives of the Saints, written for lay readers in Old English, gives us a vivid account of his tomb, festooned with abandoned crutches, and of the miracles which led to those crutches being left behind. Wulfstan’s Narratio, on the other hand, in Latin, was intended for learned readers.

Dialogos is an all-female group of four voices, so it’s hardly surprising, given the music here, that the performances are reminiscent of the much missed Anonymous 4, who made so many fine recordings of medieval music for the Harmonia Mundi label.

The group has recorded a programme which they have been presenting live for some time as a form of miracle play about the life of Swithun. Some aspects of that presentation are inevitably missing from an audio recording, but I for one am grateful to have received this new Arcana release for review. In any case, some of the drama of the presentation is preserved, for example by the opening piece announcing the presence of Ælfeah, Ordbriht, Wulfsin and Ælfric, all resplendent in the glory of their priestly authority (not ‘episcopal’, as translated in the booklet.) The reference to the four witnesses reflects the practice, described in the booklet, of performing the music with two junior singers backed up by two seniors, but none of the members of Dialogos can be regarded as in any way inferior.  We seem to have found worthy sucessors to Anonymous 4.

Music from the Winchester troper has occasionally featured on other recordings, notably from the Schola Gregoriana of Cambridge and Mary Berry on a 1992 Herald recording of Christmas in Royal Anglo-Saxon Winchester: 10th-century Chant from the Winchester Troper (HAVP151). That’s a reconstruction of a festal mass, so there’s no overlap with the new recording or with a Harmonia Mundi recording, also of medieval Christmas music from the Orlando Consort (HMU907418). On another recording, from Aeon, Music for a King: The Winchester Troper music for Easter from the Troper actually takes up only part of an album. I responded very favourably to that part of the recording, but found the modern music on the rest out of sync with the earlier content.

Now Arcana have given us a recording consisting entirely of earlier music, much of it directly taken from the Winchester service books of the time, the rest a reasonable reconstruction of the style of that music in setting the words of the early accounts of the life of Swithun. While the enterprise is clearly mainly of interest to those like myself who value Old English literature and music, general listeners should not automatically consider themselves precluded. Give Swithun a chance – perhaps try out this music from Naxos Music Library or another streaming service – and his ethereal music may well work the same sort of miracle for you.