You are here: Home / Playlists / The Cardinall’s Musick and William Byrd

Conductor Andrew Carwood guides us through the final recordings of his great William Byrd cycle (Volumes 12 through 14!).

NOTE: All of the music on this program is from the recordings of William Byrd featuring The Cardinall’s Musick directed by our guest Andrew Carwood. For more information on this ensemble:

In this latest volume from The Cardinall’s Musick acclaimed Byrd series, the composer’s overtly Catholic agenda is clearly displayed. In an age when censorship was rife and spies were everywhere, it is not surprising that possession of the first volume of Gradualia should have been cited as one of the reasons for the arrest of a Jesuit priest called de Noiriche (although obviously the spies had other more compelling evidence to hand). Only one set of the 1605 partbooks remains intact, although they have had their introductory material removed and perhaps these volumes were considered too dangerous to own. This fear, whether real or perceived, was not enough to dissuade Byrd and his publisher from producing a second book of Gradualia in 1607, or from re-printing both volumes in 1610.

All of the music on this disc is drawn from the first volume of Gradualia published in 1605. The music is a world away from the dark broodings of the Cantiones Sacrae from 1589 and 1591 where Byrd is preoccupied with the melancholy which dominates his middle years. In the later publications Byrd achieves a fusion of styles, mixing the energy, word-painting and rhythmic vitality of the secular madrigal tradition with the spirituality and liturgical context of words from the Mass and Divine Office. The witty use of short bursts of melody often thrown from one voice to another, together with the energized rhythmic cells, suggests a man who is not obsessed with a hopeless cause. It may be that in the Essex countryside, surrounded by sympathetic folk, Byrd had found a real home away from the political maelstrom which raged in London. These pieces show a glimpse of the man which is rather different to our more usual perception of the composer racked with misery at the deprivation of Catholics in England. Here we see a man in the later stages of life, affected by the aftermath of the Reformation (as his earlier publications clearly show), yet who is now sufficiently relaxed and secure to be able to indulge his considerable wit and imagination, and who is confident enough to use the most up-to-date musical styles. Here there is no wringing of hands, nor downcast eyes but rather the musical embodiment of an unshakeable faith. 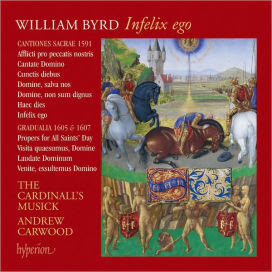 The Cardinall’s Musick’s award-winning Byrd series reaches its final volume, which includes some of the composer’s most sublime and adventurous music, drawn in the main from the 1591 Cantiones Sacrae collection. Throughout this series it has become evident that a comprehensive survey such as this shows the genius of the composer in a uniquely effective way: by demonstrating the extraordinary variety and unsurpassable quality of his musical and liturgical achievements. Andrew Carwood defines Byrd as the greatest composer of the age in his booklet note—as he writes: ‘If there is an English musician who comes close to Shakespeare in his consummate artistry, his control over so many genres and his ability to speak with emotional directness it must be William Byrd.’

The ‘title track’ of this volume, Infelix ego, is the crowning glory of Byrd’s achievement as a composer of spiritual words and one of the greatest artistic statements of the sixteenth century. This remarkable text, taking the form of a number of rhetorical statements and questions, shows the whole gamut of emotion from a soul in torment—guilt, fear, embarrassment, anger, but crucially the gift of release when Christ’s mercy is accepted. It can be seen as a microcosm of Byrd’s sacred music and a fitting crown to this series.

The Great Service (Venite, Te Deum, Benedictus, Kyrie, Creed, Magnificat and Nunc dimittis) was virtually unknown until its rediscovery by Edmund Fellowes in the manuscripts of Durham Cathedral in 1922. The earliest source for what Fellowes described as the ‘finest unaccompanied setting of the service in the entire repertory of English church music’ is in the hand of John Baldwin and dates from around 1606 which makes assigning a date of composition very difficult. It used to be thought that most of Byrd’s music for the English church was written during his time as organist of Lincoln Cathedral but this is too simplistic an assumption. The Great Service certainly sits firmly within the Elizabethan tradition of composition as established by Sheppard (especially in his Second Service to which Byrd makes reference), Parsons and Mundy. Yet the imitative style, the technical complexity and the way in which Byrd uses the various vocal scorings available to him (especially the divided treble voices) suggests that this piece belongs not to the Lincoln years but to some time later, perhaps the 1580s. For many choirs the sheer scope of this music and the lavish scoring for ten parts (SSAAAA TTBB) must have made it impossible to perform: few could have boasted sufficient numbers of singers for such an undertaking. There is perhaps only one Elizabethan institution which could have dealt with such a piece and that was the Chapel Royal; it may be that Byrd wrote it specifically for them.
Of the many sophisticated features of the Great Service, juxtaposition is one of the most important – verse singers set against full choir, higher voices against lower voices, homophony against imitation – all of which allows Byrd to have a tight control of the drama of the text. At the same time he revels in the full sonority of the ten-part scoring and fuses elements from all three service styles. The two sides of the choir (Decani and Cantoris) are pitted against each other in the manner of the ‘short’ services but not simply to provide variety but more often for dramatic effect. In the Te Deum Decani represents the ‘glorious company of the Apostles’ and Cantoris the ‘noble army of Martyrs’ and then both unite at the mention of the ‘holy Church throughout all the world’. Such full choir statements are always offset by more intimate sections for verses where Byrd will exploit the full range and colour of the voices, using three altos and a tenor in the Benedictus at the words ‘And thou, child, shalt be called the Prophet of the Highest’ and scattering the proud in the Magnificat not only ‘in the imagination of their hearts’ but audibly in the music.

“This new recording is something special. Whether it’s because of the sheer experience of having sung so much of Byrd’s music as to have assimilated his musical language utterly, or whether it’s simply the raw musicianship and cultivated intelligence of the performers, thre’s a clarity and intensity in each verse that is spine-tingling. In his excellent booklet notes, Carwood rightly mentions a moment in the Magnificat where Byrd scatters the proud ‘not only “in their hearts” but audibly in the music’. Here, as elsewhere, Byrd’s setting is realised with the kind of skill and conviction that moves rather than simply amazes.” (Robert Levett, International Record Review)

“The 10 voices of the Cardinall’s Musick launch into the opening of Byrd’s The Great Service – “O come, let us sing unto the Lord” – with a soaring joyfulness and clarity that sustains throughout this large-scale and elaborate work. Andrew Carwood and his group have won countless accolades for their series of Byrd’s Latin sacred music. In this Anglican work, they achieve the same outstanding level of musicianship. The (female) sopranos have strength and purity at the top but an effective lightness, too, closer to the sound of boy trebles. The full ensemble tone is bold and energetic. Also includes Unto the Hills Mine Eyes I Lift (1589) and four pieces from Psalmes, Songs and Sonnets (1611).” (Fiona Maddocks, The Guardian)