You are here: Home / Playlists / The Peterhouse Partbooks, Vol. IV

The Blue Heron Ensemble and Scott Metcalfe are back with their incomparable series of performances from this treasure of early English Renaissance composition.

Note: All of the music on this program comes from the recording Music from the Peterhouse Partbooks, Vol. 4 with Blue Heron directed by Scott Metcalfe. The recording is BHCD 1005.
For more information: http://blueheronchoir.org 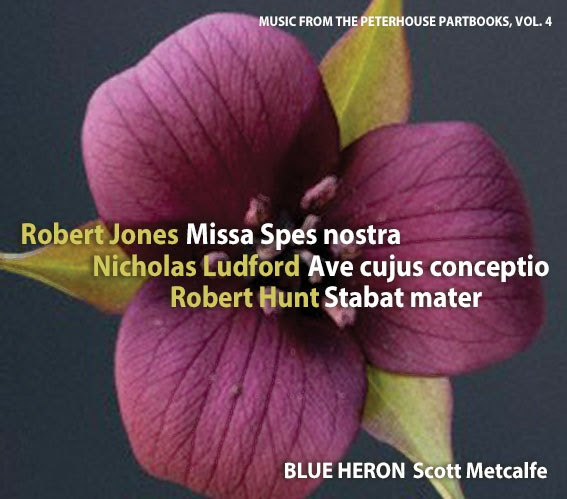 The fourth installment in Blue Heron’s 5-CD series of Music from the Peterhouse Partbooks contains the world premiere recording of the only surviving Mass of Robert Jones (fl.1520-1535), who was employed in the royal chapel during the reign of Henry VIII. Lyrical and mellifluous, the mass is a mature work, revealing a Master composer at the height of his power. The completely unknown composer Robert Hunt left behind a stunning work that brilliantly highlight the drama of the Stabat mater story. The recording is part of a 5-CD project under way since 2010.
“A superb example of what Scott Metcalfe has achieved with Blue Heron: an ensemble that yields to none for intonation, blend, and clarity, yet also utilizes both overall and part-related dynamics as an expressive device in a way most other professional choirs of its quality do not. Metcalfe is alive to the lyricism that was a remarked-upon feature of 15th century English music, and the beauty of Blue Heron's phrasing displays this everywhere on this disc.…the entire series to date is worth the purchase.... Strongly recommended.” Barry Brenesal | Fanfare (Sept./Oct. 2015)
From Choral Net:
Our understanding of English music from the early sixteenth century is grievously hindered by a historical tragedy, the loss of most manuscripts of English sacred music during the religious upheavals of the 16th and 17th centuries. The Reformation regarded the florid music of late medieval Catholicism with disdain, if not outright hostility, and much was lost or deliberately destroyed by zealots. Fewer than ten significant sources survive from the years 1480-1547, a smaller number of volumes than one might have found at the time in just one well-stocked chapel’s music library. The Peterhouse partbooks are the largest extant source and contain nearly 50 pieces not found complete anywhere else. Despite the enormous importance of this source to music history and the extremely high quality of much of the music contained in it, it has received short shrift from performers and musicologists alike owing to the fact that one of the five partbooks, along with a portion of another, has been missing for centuries. This has prevented singers from performing the fifty pieces in the partbooks that survive complete in no other source—until recently, that is. Blue Heron’s performances of the incomplete Peterhouse music rely on brilliant reconstructions by the English musicologist Nick Sandon, who has devoted his career to restoring this repertoire to its rightfully prominent place.
Reviews of Volume 1 included an extended piece by Alex Ross in The New Yorker (January 10, 2011), in which Ross commended Blue Heron for its “expressive intensity…even a hint of Baroque flair…fine gradations of dynamics; pungent diction; telling contrasts of ethereal and earthly timbres…” About Volume 2, Barry Brenesal wrote in Fanfare (Sept./Oct. 2012) “This album and its predecessor…are the beginning of an exciting series, more than hinting at the wealth of great sacred music written by English composers between roughly 1500 and 1540…top marks in all respects: engineering, liner notes—by the group’s director, Scott Metcalfe—and, of course, the performances themselves.” Matthew Guerrieri called Volume 3 "exemplary" in The Boston Globe, and continued: "The performances are suffused with elegance and polish, but, as with other releases in the series, what is equally compelling is the play of time: bygone, deliberately antiquarian relics reintroduced into the modern world as pristine artifacts; intense, expressively heightened dramas that unfold in a kind of purified, meditative slow motion."
1 Ave cujus conceptio – Nicholas Ludford (8:51)