You are here: Home / Playlists / The Time of Conflict

After coming to Munich, Lassus’ life was at first comfortable and merry; the latest from the Egidius Kwartet looks at the first difficult times for the composer and his formerly supportive patron.

NOTE: All of the music on this program is from the recent recording dedicated to Roland de Lassus, “Biographie musicale Vol. III” featuring the Egidius Kwartet and College directed by Peter de Groot. It jus on the Musique en Wallonie label and is CD MEW 1369. 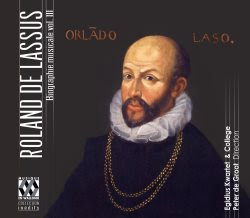 From Johan van Ween, MusicWeb International: Orlandus Lassus - or Roland de Lassus, as he is called in the frontispiece of the present disc - was one of the most prolific and versatile composers of his time. This is documented by the long list of his compositions in New Grove which also includes references to the many editions of his works in his own lifetime. The fact that many of these editions include pieces which had been printed before, confirms the popularity of his music across Europe. Lassus contributed to all genres of his time: masses and other liturgical works, motets, madrigals, chansons, German songs and instrumental music. These are all represented on this disc.

It is the third volume in a series presented as a 'musical biography' of Lassus. This means that each volume includes compositions which were written at a particular stage in his career. The first volume was devoted to his early years, until he entered the service of Duke Albrecht V in Munich in 1556. The second volume, reviewed here, includes music from the first stage of his activities there. The present disc goes one stage further: at this point he has fully established himself, and his position is such that he allows himself to complain about his employer. His ties with Albrecht's son Wilhelm became closer, and in some of his letters he openly criticizes the latter's father. Apparently the relationship between Albrecht and Lassus became sour. On the one hand Lassus' reputation had risen to such a degree that he became a little too self-confident in his employer's eyes, and with that too independent. We should not forget that despite musicians' skills and reputation their social standing was still rather low. Albrecht may have felt that Lassus didn't behave correctly; he was, after all, a servant. The close relationship between Wilhelm and Lassus may also have been a cause for concern: Albrecht must have regretted that his son spent money like water and managed to go bankrupt in 1575.

It is hard to say in what way the troubles in the relationship between Lassus and his employer have left their marks in his oeuvre. Music at the time was seldom personal in character, let alone biographical. The liner-notes include lengthy and useful analyses of the pieces in the programme but generally - and probably wisely – they do speculate about any meaning in regard to Lassus' personal circumstances. The exception is the comment on Sancti mei: "The short two-part Sancti mei is to an anonymous text (perhaps by Lassus himself, alluding to the battles he has to fight a superior seen as tyrannical?) (...)." The text says: "O my saints, you have had battles in the past: but I will recompense you with the cost of your tribulations".

One thing which this disc impressively shows is the composer’s versatility. It also showcases the variety in style in both his sacred and his secular works. He is also good for a surprise now and then. Anna mihi dilecta is a good example. It is highly chromatic, in the style of the Prophetiae Sibyllarum which, although printed in 1600, date from the 1550s, about twenty years earlier than the repertoire on this disc. Despite its Latin text it is a secular work.

The Missa ad imitationem O passi sparsi is based on a madrigal by Sebastiano Festa, on a text by Petrarca. The harmonic peculiarities of the madrigal are included in the three excerpts from this mass. The Magnificat supra Las je n'iray is based on a chanson from Lassus' own pen. During this setting Lassus gradually moves away from the original. One of his best-known chansons is Susanne un jour, on a text by the French Huguenot poet Guillaume Guéroult. Interestingly, at this point, we hear the hardly known German version (Susannen frumb) which is easily recognizable by the cantus firmus in the tenor.

One specific aspect of this programme is the inclusion of instrumental pieces, here referred to as sine textu. In 1577 Lassus published a collection of pieces for two voices. It was apparently a time of financial crisis at the court of Albrecht and the composer started to reduce the scoring of his works. The collection includes twelve pieces without a text, apparently meant to be performed instrumentally. At the time this not at all common: purely instrumental music was seldom written. Eight of these are included here, played on two viole da gamba.

It is nice to see this interesting series develop. I haven't heard the second volume, but I was certainly impressed by the first, performed by the French ensemble Ludus Modalis, under the direction of Bruno Boterf. The second is by the German ensemble Singer Pur; Brian Wilson liked it, but added that both discs were probably less suited to beginners. The present disc seems better suited to them as it includes such a wide array of pieces, sacred and secular, the latter in various languages and with different subjects. The instrumental works offer nice moments of relaxation, even though they are rewarding to be listened to carefully. The Dutch ensemble Egidius Kwartet and College have great experience in both secular music - especially renaissance chansons - and sacred music. Their recent project devoted to the 'Leyden Choirbooks' has resulted in high-quality recordings, and these Lassus interpretations are at the same level. Almost all the pieces are sung a capella and with one voice per part. That could raise some questions as it is known that the Munich chapel was quite large and instruments often participated in performances. However, the time the music on this disc was written was a period of (financial) tribulations, and it seems right to opt for a small line-up. The balance in the ensemble is just right: the sopranos sing brilliantly but never dominate as they tend to do in some ensembles. Given the close connection between text and music by contrast with the oeuvre of other composers of Lassus’ time, the delivery is especially important, and that is another asset of these performances.

The value of this disc is enhanced by the informative liner-notes and the inclusion of the lyrics, with translations in English, French, German and Dutch.