You are here: Home / Playlists / Three Decades of Anonymous 4

It’s hard to imagine these ladies who gave us so much are no longer performing; as a final tribute to their work, each member chose her favorite pieces from the 30 golden years they were together. 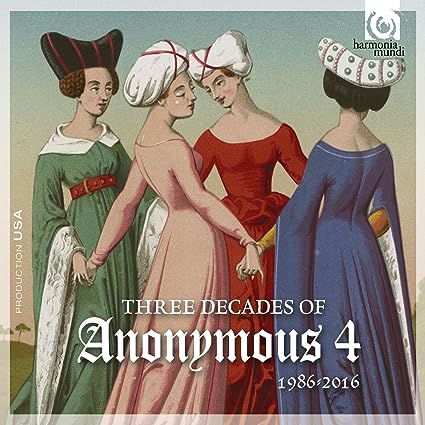 The ladies of the chart-topping vocal quartet Anonymous 4, famed for their 'unearthly' vocal blend and purity of sound, have triumphed in concert on three continents; their listeners have bought nearly two million copies of the group’s recordings for Harmonia Mundi. This retrospective collection includes highlights from their 25-year collaboration with HM, with repertoire ranging from 12th-Century ecstatic chant to American roots.
Cross-Rhythms: review by Steven Whitehead (9/10/2016):

This retrospective collection celebrates three decades of Anonymous 4 on the Harmonia Mundi label. From 1986 to 2016 Anonymous 4 released 23 albums with sales in excess of two million. Now the ladies have decided to call it a day and this compilation is a suitable send off. Narrowing down such an extensive back-catalogue to 22 tracks must have been a challenge but the end result is a satisfying cross-section of their musical journey. The programme is predominantly but not exclusively Early Music with some examples of their more recent excursions into Americana. Actually I was a little worried that the different genres on display would not sit comfortably together and was preparing to reprogramme the running order but I need not have worried. Whether they are singing 19th century Spirituals, such as "Wayfaring Stranger" (technically a "Religious Ballad") or the music of mysterious visionary Hildegard of Bingen from the 11th century matters not at all. The renowned purity and vocal blend of the four singers (there have been five members over the years but only four at one time) shows that the worship of God through the centuries remains the same, even if fashions in music come and go. While we may be tempted to visit our favourite download store and cherry pick tracks I would urge you to go for the whole package. The CD is beautifully presented with many pictures, full lyrics and an introduction to each piece to set it in context. The thrill of moving, as we do if we follow the approved running order, from the American Civil War song "The Faded Coat Of Blue" to Benjamin Britten's "A New Year Carol" and then an Offetory chant from Sant'Iago is an experience well worth the having. Ladies of Anonymous 4 we thank you.