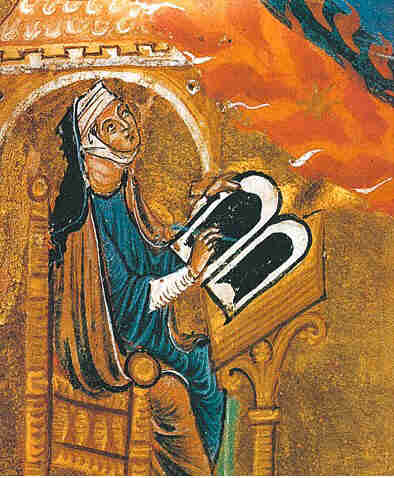 NOTE: All of the music on this program is from recent recordings of medieval works. 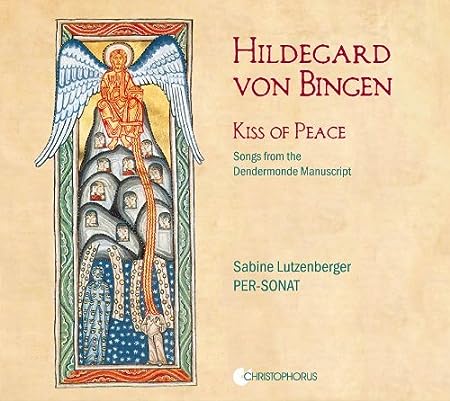 After the 1000th anniversary of her birth in 1998, not much more was heard about St. Hildegard until Pope Benedict surprisingly entered her in the canon of the Catholic Church last year. This led to renewed interest in both Hildegard's personality and her songs. Sabine Lutzenberger, one of the leading specialists in medieval singing, has been involved with the work of Hildegard for a long time: her first CD of her songs (at that time with the ensemble für frühe musik augsburg) was issued by Christophorus in 1990, and another followed in 1997!
She returns to the origins for this new CD, interpreting Hildegard's songs directly from a facsimile of the Dendermonde Codex, compiled during Hildegard's lifetime under her supervision. For the interpretation, which concentrates on the beauty of the melodies and pure singing, she has been joined only by Baptiste Romain, who continually brings out important musical features with the medieval fiddle and the bowed lyre. The bells with which Sabine Lutzenberger very discretely accompanies herself are also new. This new recording emanates a deep tranquillity, and Sabine Lutzenberger's extensive experience is everywhere in evidence – but it is especially the power inherent in these melodies, almost 1000 years old, that can be sensed in each tone. 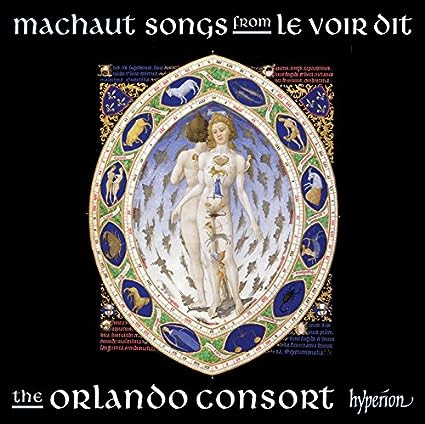 The Orlando Consort performs the music of Machaut, the most significant French poet and composer of the fourteenth century. Sometimes described as ‘the last of the trouvères’ because of his dual talents as poet and musician, Machaut built on past traditions yet spearheaded a new school of lyric composition. In the field of literature, he developed several of the poetic forms and genres that dominated for generations to come. His impact on the musical life of his age was equally profound; he is closely associated with the new style of polyphonic love-song that became so popular in the fourteenth century, and today is considered the supreme representative of the Ars nova musical tradition that revolutionized composition and notation in that period.

Livre dou Voir Dit (‘Book of the True Tale’) is Machaut’s masterpiece. By its very title, the tale purports to be autobiographical: it relates a supposedly recent episode in the ageing poet-composer’s life, his love affair with a lady some forty years his junior. 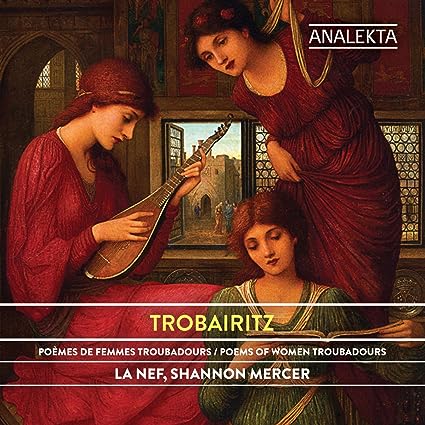 from the CBC: Trobairitz: Poems of Women Troubadours, the Analekta label's first release of the season, may also be the most imaginative and fantastic. On it, soprano Shannon Mercer and the musicians of La Nef reconstitute the songs of 12th- and 13th-century female troubadours in the south of France — the trobairitz. It's an exercise in musical anthropology, and the results are stunning.

The project is the brainchild of Montrealer Seán Dagher — composer, arranger, oud player — who came across the poems of the trobairitz and decided to set them to music. Written in Occitan, the poems show a surprising degree of openness, dealing with themes relating to love, sometimes adulterous or lesbian. Dagher wondered about these remarkable women and their place in medieval society.

From the liner notes:  When I first heard about the trobairitz phenomenon I was intrigued ; imagine, women in the 12th and 13th centuries writing with such freedom. I wondered what in the social and political climate of Southern France at the time could make that freedom possible. Was it the lack of a strong central government ?

The French monarchy had a tenuous hold only on the South at that time. Less power was beheld to the Pope and the Church since the head of each court held more power then anywhere else. Perhaps that is why there is so much in these texts that would certainly be frowned upon by the Church, even today.

Perhaps women have always thought and written about such things and it is a mere chance than this small sliver of repertoire survived. What is certain, though, is that these women were given a voice, their poetry was sung, and that should tell us something about the society in which they lived. The trobairitz were mostly noble women : wives and daughters of the ruling dukes and counts.

They were also often the lovers of troubadours, who were rarely from the nobility. Perhaps this proximity to different layers of society provided them with a clearer view of the world in which they lived.

Much of what we know of the lives of the trobairitz is what can be gleaned from the short biographical introductions to their poems. These introductions, called vidas, were often written long after the woman's life and can hardly be considered reliable. For example, Beatritz de Dia was married to Guillem de Poitiers, Count of Viennois, but was the lover of Raimbaut d’Aurenga and is even thought to have written some poems currently attributed to him. Azalaïs de Porcairagues was said to be the lover of Gui Guerrejat, the brother of William VII of Montpellier.

The poems I chose (written in occitan, langue d’oc) to set to music reflect themes such as love (sometimes adulterous or lesbian), how to manage expectations of marriage and motherhood, relationship roles, and also political posturing. The way I wrote these songs is based on the way troubadours and trobairitz set their poems to popular melodies, meaning that any poems can be sung with a number of melodies and any melody can be attributed to a given song.