To view more of our classic shows (from 2000 and earlier), click here.

NOTE: All of the music on this program is from a concert by the Folger Consort. Most of the music is available on the Consort’s recording, Divisions on an Ayre. For more information:  https://www.folger.edu/folger-consort

Preservation of this program is made possible by a generous grant from Holly Katherine Martin. 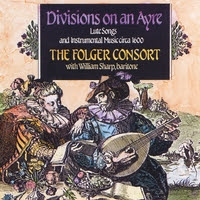 From the Washington Post: Last weekend, in a program titled "Time Stands Still," the Folger Consort and guest baritone William Sharp took a look at some of the things that were happening in music around the year 1600. It was a lively era and historically crucial, with late Renaissance styles turning into early baroque, opera being born, and chamber music beginning to develop an identity of its own.

Sharp, a performer of great versatility, ranged from the melancholy intensity of John Danyel's great "Grief keep within" to the X-rated folksiness of "Watkins ale" in the English segment. In French, he sang three "airs de cour" -- rather trivial pieces, but clever and elegant in a style that would survive right up to the time of the Revolution. Finally, a series of arias and two instrumental works by Italian composers showed a level of vocal technique and a sheer inventiveness that were leading the world of music in new directions, into what would become the baroque era.

Sharp is a marvelous singer, with a gift for dramatic facial expression that effectively supplements the richness of his tone and his precise sense of style. The consort played well in ensemble and as vocal accompanists, but each of its members had some notable solo moments: Scott Reiss (recorders) spinning out elaborate variations on simple vocal tunes; Christopher Kendall (lute) most notably in a pavan by Anthony Holborne; and Robert Eisenstein (viol) in an elaborate, quirky galliard by Tobias Hume. Nearly all of this program is available on the group's new CD, "Divisions on an Ayre." The main exception is "Watkins ale," which they should record, with Sharp, as soon as possible.

1) Can She Excuse My Wrongs?

2. The Earl of Pembrooke's Galliard

4. The Lowest Trees Have Tops

10. Fain Would I Change That Note

12. My Lord of Oxenford's Maske