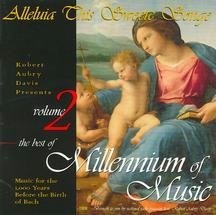 Millennium of Music host Robert Aubry Davis writes a meditation on Christmas to accompany a selection of some of the program's most beloved holiday music:

He Shall Fedd His Flock.
19. HANDEL: Messiah: He Shall feed His flock. soloists/Les Arts Florissants/William Christie 5:48

A MEDITATION ON CHRISTMAS

The message of Christianity is encapsulated in the Easter story: it is the real story of the young faith, its image is in the daily celebration of communion, it is the center of the church year. The birth of the new Redeemer is a small part of the narrative, told in somewhat conflicting accounts only by Luke and Matthew.

The young faith had competition from established religions, some of which are still with us, some of which have nearly disappeared from memory. Conflicts arose when men of good will and brilliant intellect began to question the supernatural and seemingly impossible aspects of the story of Christ and its import. When there seemed to be competition with state religions, the crude Roman persecutions began.

There is a fight, a kind of philosophical holy war, in the first years of Christianity. It is a great study, and what was finally hammered out at the Council of Nicaea represents the digestion and clarification of a huge body of reasoned argument seasoned by faith.

The story of the celebration of Christmas is very different. Perhaps because of the sheer vulnerability and gentleness of the imagery, it arises, gradually and quietly, as a time of celebration. Despite Clemens of Alexandria's belief that a spring date for the birth should be argued, as early as the second century we see the current solstice-time celebration in Antioch. And even though Gregory of Nazainzus argued against conflating the ways of Christianity with those of the pagans, the rest of the story of Christmas is based entirely on this mixture.

From the important Roman feast of the Saturnalia (which actually lasted for a week surrounding the current winter solstice) we find feasting and exchange of gifts (particularly those emblematic of the harvest, thus establishing the much-maligned fruitcake as one of the earliest Christmas presents). Candles and torches brought back light to the world.

While most Eastern faiths had solstice celebrations, the rise of Mithraism from Persia brought about a practical faith especially favored by soldiers. Justin Martyr was already distressed because this new Sun God religion seemed to have adopted and corrupted the sacramental meal from Christianity (already a reflection of both the Jewish seder and Greek mystery faiths, like Orphism). Mithra was born of light and wisdom on December 25th, and in the third century Emperor Aurelian declared that date the Dies Invicti Solis.

Perhaps because Constantine was introduced to Christianity by his mother, Helena (who excavated the True Cross), the feeling for the time of Jesus' birth began to intensify in earnest. Scholar A.D. Nock wisely noted that "a man used Mithraism, he did not belong to it body and soul." Christianity was all-encompassing, and as you cared for the resurrected Savior, you cared for His mother and birth. Constantine oversaw the building of the Church of the Nativity in Bethlehem, and, as the celebration of the new state-sanctioned religion spread, we see Christmas celebrated in Rome by 336. In 350, Pope Julius I settled a variety of disputes by simply declaring December 25th as the Feast of the Nativity of Our Lord (one of only three such birthday feasts, the other two being Mary and John the Baptist).

The next great faith that Christianity absorbed in part was that of the Celts and Germanic tribes. Often pointed to is the tale related by the eminently readable historian of the English church, the Venerable Bede. He tells how Augustine was established as the first Archbiship of Canterbury, and noted how the people celebrated their Yule (Bede thought it was their word for "winter solstice" - it is actually Old Norse jol, "a specific winter feast"). Greenery was brought indoors, livestock was slaughtered, there were bonfires and feasts. Pope Gregory the Great, wise as ever, advised Augustine "nor let them now sacrifice animals to the Devil, but to the praise of God kill animals for their own eating, and render thanks to the Giver of all their abundance.

This pattern of acceptance and adaptation becomes the Christmas story, from the pre-Christian Celts climbing the sacred oak with a golden sickle on the sixth day of the moon to cut the mistletoe so it may fall in a white cloak and bring fertility to the worshipper, to Boniface felling the oak sanctified to Odin in eighth century Germany and dedicating the young fir behind it to the Christ Child. Holly (and its berry), ivy, the yule log, the tree, the rise in importance of St. Nicholas, the increasingly child-centered cultures both of Golden Age Holland and Victorian England, the rise of mass media and advertising in the United States in the last century and a half; all are swept into the season we now celebrate (or at least see decorated) sometime after Hallowe'en only to end precipitously now even before New Year's has come and gone.

My hope for this recording is to return us all the heart of this story. It is an event that takes this tale away from the philosophers and scholastics, and puts it where it really lives: in peoples' hearts. It is still the story of the infinitely great becoming infinitely vulnerable: it is something we know we have been, as a baby; have known perhaps as a parent; and could know, as a witness to a miracle.

Most record companies have origins that are technological; only one evolved because of a bet over a bottle of champagne. That label is Harmonia Mundi, and we can take enormous satisfaction 40 years later that the wager was won. Crazy ideas evolved when a bunch of
journalists got together over drinks, but Bernard Coutaz decided to take up his friends' challenge and sink his fortune into a spoken-word disc of contemporary French writers interspersed with organ music.

Today, a spoken-word record with organ fill would be as potentially useful as a paperweight, since there would be no radio station that would air it or retailer that would carry it. France in 1958 was different. The modest royalties from this first project allowed Coutaz to invest in the next recordings that would become the hallmark of the label's early years.

With the help of the specialist Pierre Rochas, the "Historical Organs of Europe" featured great performers and expanded to more than 100 issues. The series fostered two kinds of growth: the exploration of a vast and often unrecorded repertoire appropriate to the time and place of the instruments themselves began to identify Harmonia Mundi as an "early music" label; and Coutaz himself began to refine an already "tuned" ear.

The integrity of the HM sound remains a hallmark of the label. But in 1965, Bernard Coutaz's ear heard a sound that was entirely new to him. It was the voice of one of the fathers of the 20th-century early music movement, and the 15-year collaboration that ensued touched all of us
who love this music. In picturesque Avignon (HM has always been happily housed in Provence), Coutaz attended a recital by Alfred Deller. He had never heard Deller before, live or on disc, and, as he himself says, "I knew at once that this was a genius of the voice...so I kidnapped him!" Driving the 80-odd miles to his own home, Coutaz talked with Deller
until dawn, by which time he had persuaded the English countertenor to sign a contract that would grace Harmonia Mundi with his recordings and vision.

Twenty-some recordings later (including eight dedicated to Henry Purcell), Deller laid the foundation, in terms of both repertoire and philosophy, for what HM would become. Much of my own professional life in the world of early music flowed from Alfred Deller; unfortunately, I never got to thank him personally. It is a blessing that Bernard Coutaz recognized and acted upon Deller's vision; when Deller died in 1979, it was a sad day for all who love early music, and a great personal loss for Coutaz.

But what exquisite fruit has resulted from their unique collaboration: from the nearly 50 recordings with William Christie and Les Arts Florissants or 60 discs with Philippe Herreweghe and his various ensembles, ranging from Josquin to Fauré. HM has grown to become an
international establishment and distributor of other labels. In 1982 this led to the Los Angeles branch, which under the stewardship of René Goiffon and Robina Young has spurred the blossoming of energetic young American artists who have helped define today's early music scene.

We need hardly defend the work of Anonymous 4 in medieval music or Paul Hillier bringing the rigorous scholarship from his Hilliard Ensemble days to his work with the Theatre of Voices and the Pro Arte Singers; I am simply happy they can grace this recording. It took a while for any Harmonia Mundi release to match the sales of Alfred Deller's two-disc recording of Purcell's King Arthur. I am sure that Bernard Coutaz is gratified, and believe that Deller would himself have been pleased, that "An English Ladymass" with Anonymous 4 became the gentlest possible record-breaker for the label. That recording typifies what Coutaz has stood for these 40 years: music we rarely hear, with elegant clarity of sound and beautiful simplicity of presentation, shimmering with repercussions of possibility and meaning like a glass of champagne held up to the Provençal sun at a luncheon with friends 40 years ago, as a gentle wager was made, and the very world seemed to hum with harmony.