Sacred works by Frescobaldi, Marian hymns by Caccini and others, and Jewish-Italian spiritual music. 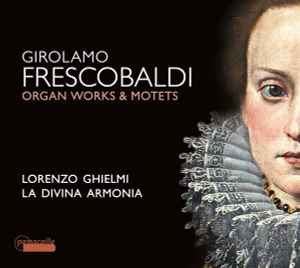 The Monteverdi contemporary Girolamo Frescobaldi (1583-1643) is now unfortunately almost exclusively seen as an important and influential composer of works for keyboard instruments, but he also composed both sacred and secular vocal music throughout his entire creative period. The Italian Lorenzo Ghielmi and his ensemble La Divina Armonia show in their recording with PASSACAILLE that sacred vocal music is no less important and in connection with his organ works even results in a particularly charming program. La Divina Armonia was founded by Lorenzo Ghielmi in 2005. All the musicians involved in the Italian group have distinguished themselves for many years in the performance of Baroque music as soloists and musicians in several of the most renowned ensembles in this field. In La Divina Armonia they're coming together to play music from the Baroque up to the early Classical period, playing extraordinarily vividly, but in a beautifully cantabile manner at the same time. 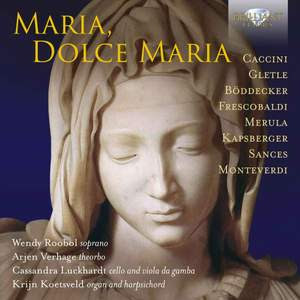 From Presto Classical: ‘What touches and appeals to me most in the music of Monteverdi is the ultimate symbiosis between music and text,’ says the Dutch soprano Wendy Roobol. ‘He unites the two in such a way that the outcome is more than the sum of the parts. As a result, his music has enormous sincerity, richness and drama.’

As a central member of the vocal consort Le nuove musiche directed by Krijn Koetsveld, the harpsichordist on this album, Wendy Roobol has performed the complete madrigals of Monteverdi in critically acclaimed recordings for Brilliant Classics.

Her first solo album draws on that expertise to present a unique programme of Marian hymns from around Europe. The great names of the Italian school are naturally represented, opening with the title-song by Francesca Caccini (talented daughter of Giulio Caccini) and reaching a fitting climax with Salve, O Regina by Monteverdi and the Lament of the Madonna from his Selva morale e spirituale collection.

In between those unchallenged masterpieces of the late Renaissance, Wendy Roobol ventures across Europe, first to Switzerland, for a sensuous Ave Maria by Johann Melchior Gletle, then to mid-Germany for a Magnificat by Philipp Friedrich Böddecker. These marvellous but little-known pieces have been recorded before, but not in their originally intended format of solo soprano with consort accompaniment, and these performances are graced by intense sensitivity and a spirit of intimacy that captures the devotional atmosphere of a Marian chapel.

Giovanni Felice Sances is another little-known composer represented here, but whose 1636 Stabat mater is touched by rich and affective dissonance. It makes a fine complement to the plainer declamation of the Sancta mater by the German-Italian lutenist Girolamo Kapsberger. 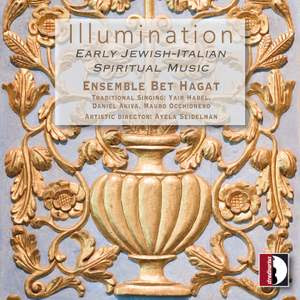 ‘Illumination’ comprises examples of rare musical and cultural gems which were nearly lost after the Holocaust ravaged Italian-Jewish religious and cultural life. Many of the traditional Italian- Jewish ‘piyyutim’ (Hebrew spiritual/liturgical songs and poems) performed here remain widely unknown in concert halls and to the general public. The Jewish and Christian Italian cultures of the Renaissance and Baroque period were at once separate and also intricately connected, and synagogue music itself has always adapted and reflected contemporary- ostensibly unrelated melodies and styles. It was thus a natural step to present works from the early spiritual music of Jewish Italy (all whose texts were in use as early as from 1600 and even before) seen through the prism of the prevalent musical styles of the same period in which Salamone Rossi and Benedetto Marcello’s own important synagogue-based works were created: the Renaissance and Baroque periods. As specialists in early Italian music, this involved interpreting which contemporary styles of music predominant outside of the ghetto in Italy at the time were likely reflected in the Jewish works (which would themselves have been performed- during synagogue services- vocally only). The task of reviving these pieces and presenting them in the fuller context of the Italian culture that they inhabited was fascinating, as the works revealed themselves in their unique beauty and spirit.