Cistercian chant, music of Venice in the middle ages, and dances from Spain in the 1400s. This is a strange compilation: three 50-minute discs containing 63 tracks of music from 18 monasteries in seven European countries. It supposedly marks 900 years of Cistercian history, but the date of 1115 refers to the founding of Clairvaux by St. Bernard; the Cistercians have already marked their 900th anniversary from the founding of Cîteaux in 1098. Indeed, American Cistercian monks made a CD titled 1098 to mark that anniversary. The choirs are variously of monks or nuns, with or without organ accompaniment (not to mention zither or flute), in Latin or more frequently in the vernacular, sometimes harmonized. Three tracks are limited to abbey bells.
ADF stands for Ateliers du Fresne, a firm that was already recording chant before it acquired Bayard and Studio S.M. (the latter indicated by the issue number, D3168), both of which had also made chant recordings. The last firm began in 1946 by recording Trappist (reformed Cistercian) monks and persevered under the daughter of the founding couple (Simone and Maurice Robreau) until the late 1990s, followed by several changes of ownership until ADF acquired the firm in 2007. The titles of the three discs suggest programs, “Cistercian praises,” “Cistercian services,” and “Marian praises,” but the contents are much too diffuse to have much meaning. There are no notes, just a paragraph (in five languages) hinting at the approach. A table of contents suggests what is on each track, mentioning the abbey and its country of origin. Only a few Latin chants are less than contemporary in sound quality. This would be much more comprehensible with detailed notes and texts, and the vernacular singing (in five languages) would be the focus of interest in that case. The various sources are edited together smoothly, and the digipack is attractive. 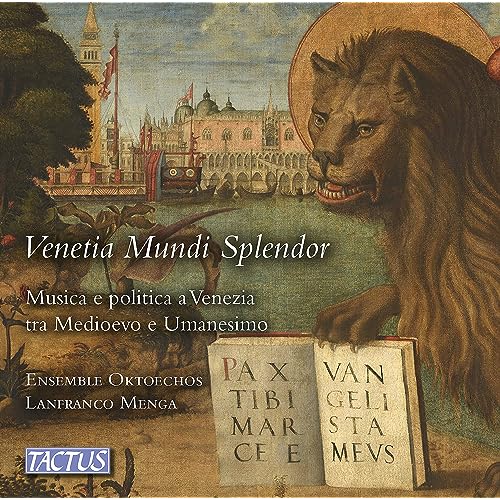 The Oktoechos ensemble, a sophisticated female vocal ensemble led by the specialist Lanfranco Menga, in this CD presents a program entirely dedicated to the union of music and politics in the Venice of the early fifteenth century, time of its greatest economic growth and territorial expansion. The naval power of the “Serenissima” and the consequent commercial vitality of the Republic inevitably created the preconditions for a parallel artistic growth, witnessed by the contributions of the greatest artists of the time alternating within the Palatine Basilica of St. Mark at the service of the Dogi and the bishops, composing a great deal of celebratory music that exalted their power and that of the city itself: the city “where the merchants were kings, where Saint Mark was, where the Dogi were used to marry the sea with a ring”

From MusicWeb International: “Venice, the glory of the world”, and so it still is—not only architecturally or culturally but also artistically. It indeed was in the middle ages, when this glory may well have been at its height. This very well filled CD covers the period from about 1330 to 1440. Much of the music here was written especially for the installation of various doges and bishops. I have just a few reservations to share about it.

I opened the packaging up with much interest: the repertoire is in many cases unknown. Yes, the Ciconia and Dufay are available elsewhere on several discs but the other names are largely new and the concept and planning behind the CD is arresting and novel. The complete track listing in the booklet gives us the dates of each piece, offered in chronological order. We learn for whom they were composed but not the composer’s dates. So, for example the first track, the bi-textual motet by Marchetto da Padova (who is especially remembered for his highly significant books on music theory), Ave corpus sanctum/Adolescens protomartyr, can be dated to 1329. It was written for the Doge Francesco Dandolo who reigned until 1339. He was the 52nd Doge and extended the city’s territories. The artists Paolo Veneziano included him kneeling at the foot of the Virgin and Christ Child in the church of Santa Maria Gloriosa in Venice.

This documentation is fascinating and useful. So is the lengthy booklet essay by Lanfranco Menga who directs the group. He does, however, write incorrectly that Ut per omnes coelitum is “by an unknown composer, but attributed to Landini”. To compound the error, he continues that it was composed for “the appointment of Francesco Zaberella as archpriest in Padua in 1401”—Landini had been dead for four years. This fine motet is, anyway, by Ciconia who was based in Padua at the time, which, after all is only about 30 miles from Venice. The motet dubiously attributed to Landini who is otherwise not known to have written sacred music is the three-part Marce, Marcum initaris written for the 59th Doge, Marco Corner.

For a disc with eighteen tracks where almost each text is different and vital to one’s appreciation and understanding of this rare repertoire, most labels would give the texts in a booklet. Not so here. We are informed that “the texts are available on our website www.tactus.it/testi”. There is no relevant page: “No lyrics found”.

Perhaps it would also bother you that, as one must admit, this music was originally composed for male voices. Eighteen tracks of just four unaccompanied female voices can seem a little wearisome, especially when the soprano(s) struggle with the demanding tessitura, for example in the Avignon-based Bertrand Feragut’s motet Excelsia civitas Vincentia. However, in small doses the singing and the performances are pleasing, although often lacking in a variety of expression and, in some case, a little slow by the standards of comparative performances.

On a more positive note, we then come to later pieces by the composers from the Low Countries and particularly to the performance of Dufay’s magnificent motet Ecclesiae militantis (c.1433). This is in five parts. The booklet’s photograph only shows four singers—Eugenia Corrieri, Lisa Friziero, Milli Fullin, and Claudia Grimaz—but this motet is in five parts, so they are joined just this once by Marija Jovanovic who, I feel, is allocated the long, tenor plainsong line. I recently heard a recording of this work by Paul Van Nevel’s Huelgas ensemble (Harmonia mundi 901700). Ensemble Oktoechos came as a pleasant surprise, because I could hear much more clearly Dufay’s extraordinary cross rhythms. Van Nevel adds, as it were, a 16ft bass to the tenor in the shape of a sackbut, rather muddying the texture, but he does build a fine climax with increasing dynamics that Oktoechos do not really achieve.

But I do not want to leave you with the impression that this is not a well thought-out and conceived disc. I have said that it is good to have many unusual pieces by little-known figures especially from the earlier, trecento period which illustrate what a highly vibrant time it was in Padua as well as in Venice. The glorious Gloria and Sanctus by the somewhat shadowy figure of Gratiosus, a monk of Padua, come off especially well as does the glowing motet Plaudem decus mundi by Christofero de Monte. It is also helpful that the acoustics are ideal and the recording was made in, I assume, the chapel of what was once a Royal Villa.

On the whole this disc is well worth exploring as long as you take it in short bursts. 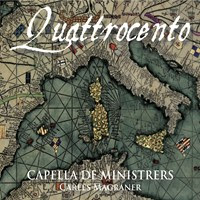 With the arrival in 1443 of Alfonso V of Aragón, “el Magnánimo” (1396-1458), as the king of the Two Sicilies, Naples became the nerve centre of the Mediterranean and the Aragonese court its most powerful dominating force. Moreover, Sicily intra pharum – or Southern Italy – commanded greater power compared to that controlled by the island of Sicily today (i.e. ultra pharum), since all administrative and governmental activity took place in Naples, leaving the bordering area in a subordinate position. Little agreement was achieved among the Neapolitan barons by this separation between centre and periphery in the kingdom of Naples, thus highlighting even further the division that existed between those in control and those under their control. Nonetheless, the humanist Aragonese court was notable for fostering a highly sophisticated artistic style. Whilst maintaining its own identity it valued local customs and usages, and adapted itself to them. After the conquest of Naples, “el Magnánimo” never returned to Spain and left rule of Aragón to his wife María de Castilla (1401-1458).

The knowledge of the ‘rebirth’ or rediscovery of ancient theatre during the course of the fteenth century is well established. It was carried out by the humanist culture, with an aim to be able to combine the new experiments in performance with the rules governing rhetoric, gesture and diction coming from classical culture. One example of this humanist scene of aesthetic experimentation could be found in the cultural life in Naples which was circulating around gures such as Jacopo Sannazaro (1458-1530), Benet Gareth – better known as Il Chariteo (1450-1514) – and Sera no Aquilano (1466-1500). Both Il Chariteo and Sannazaro appear in the Neapolitan court chronicles as being enthusiastic participants on a variety of occasions in stagings of farse, eclogues and gliommeri. Additionally, in his pastoral romance, Arcadia, Sannazaro allots the Catalonian poet the character of Barcinio – a reference to Barcino, the old name for Barcelona and the city where Il Chariteo was born. An indispensable role in this was played by music – together with stage and costume design – not only in terms of accompanying dancing, but also as a means of introducing the allegoricalcharacters and introducing them onto the raised platform where they were to declaim their texts. Although the sources conveying the musical works written by Italian composers and poets which were created for these theatrical performances are rather insubstantial in extent, this compositional practice would be taken up at the end of the Quattrocento by the frottola. Naples (but also other Italian courts as well) offered a notable example of this ‘private’ form of musical entertainment, and Aquilano and Il Chariteo were two of the most renowned improvisers of music and poetry in Neapolitan theatre from that time.