You are here: Home / Playlists / Anonymous 4: the Cherry Tree

Our favorite ladies are back with yet another Christmas disc, with songs, carols and ballads..

Songs, Carols and Ballads for Christmas

Note: All of the music on this program is from the ensemble Anonymous 4 and their disc The Cherry Tree. The recording is on Harmonia Mundi and id CD # HMU 807453. For more information: 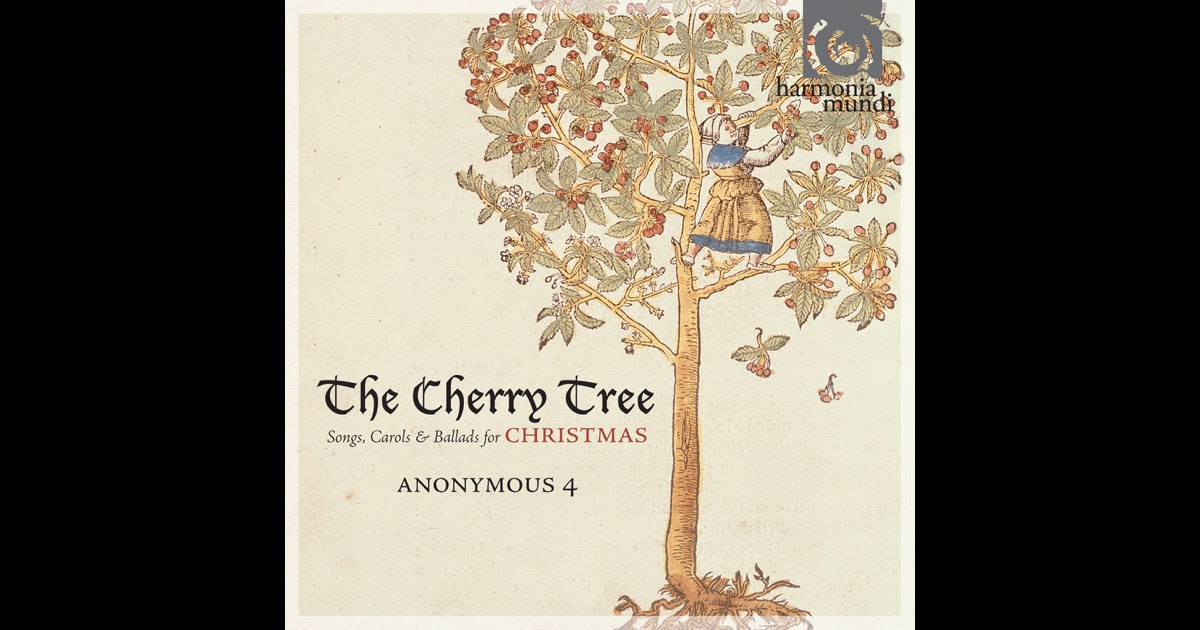 As fans of Anonymous 4's first 18 or so recordings you may remember this legendary group's first attempt at retirement from the studio--2003's phenomenal best-seller American Angels; or, was it 2005's The Origin of Fire, or the American Angels 2006 followup, Gloryland? However, it seems that, like a certain NFL quarterback who keeps returning to do what he knows and loves, to ever more acclaim, this very successful quartet has returned once more--and plans for future releases are in progress. In the music world, retirement can be a very good thing, especially when you've really nothing more to say, or when your skills and technique are failing. But this never was the case with Anonymous 4, and evidence of continued recording projects and concert performances is most welcome: the world absolutely needs music like this--of such purity and grace and beauty, supplanting the seedless hull of popular fashion with a sustainable harvest of spiritual sustenance and sheer musical pleasure. No one will ever deplore Anonymous 4 for its excess!

And although the mere idea of Christmas as a religious holiday celebration is fast disappearing from mainstream consciousness, these carols and songs preserve and continue to enliven a rich and meaningful tradition. And even if you're not a particularly religious person you can revel in these carols' possible origins in the songs of ancient and very secular feasts and festivals. Regardless, music that's been around for hundreds of years and still touches people needs no publicity machine, no slick marketing campaign, no media blitz to artificially certify its value. Like all of Anonymous 4's repertoire, this is music that celebrates its elemental form, and as such is more affecting and memorable than anything concocted by today's formulaic songwriters and highest-tech production studios. (Let's see how many people are performing Lady Gaga in 500 years.)

So, is there a review somewhere in here? Anonymous 4 fans already will be looking for the first opportunity to buy this new release--it combines the group's signature early chant and polyphony, this time mostly from 14th- and 15th-century English sources, with several selections representing English imports to the New World, including the title Cherry Tree Carol (Kentucky, 1917), The Shepherd's Star (from Southern Harmony, 1835), and William Billings' four-part fuging tune Bethlehem.

You can hardly believe the purity and clarity of the voices--and I know I've said this with every new Anonymous 4 disc release--which are recorded so intimately that if there were a flaw anywhere you'd notice. But you don't. No wonder these singers regularly are compared to angels and similarly otherworldly beings.

Highlights include any of the polyphonic pieces, but particularly the 15th-century English carols Veni redemptor gencium and Alma redemptoris mater, the latter reminiscent of the well-known carol There is no rose of such virtue (not included on this program). Fans of early American tunes will appreciate the folk hymn entries from the 19th century, rendered by these very accomplished singers in a style appropriate to time and place, but with restrained use of vocal slides and syllabic inflection that makes you want to come back rather than retreat, a performing philosophy similar to the group's tasteful and respectful interpretive style on American Angels and Gloryland. The sound, from an appropriately "otherworldly" venue, Lucasfilm's Skywalker Sound, and from the more earthly Sauder Concert Hall at Goshen College, Indiana, is as extraordinary as the singing, which--and I don't hesitate to say it again--is possessed of superhuman clarity and faultless intonation. Don't argue with this; just buy it.