You are here: Home / Playlists / Benedicta

The birthplace of St. Benedict had an abbey for centuries until it’s dissolution under Napoleon; it was re-formed only a few years ago with an energetic group of young monks, whose first recording has become a best-seller. This week, we will speak with Father Cassian, the Prior of the Monastery, and hear their remarkable first recording. 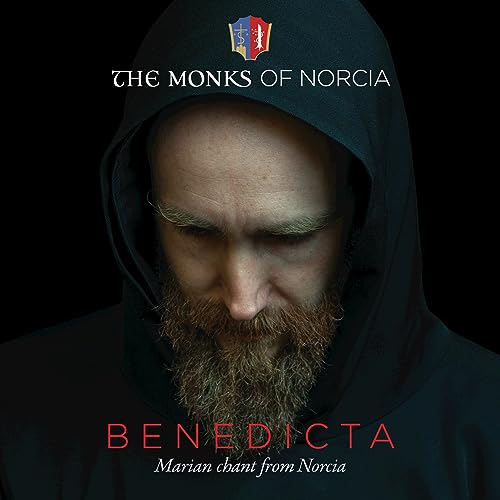 NOTE: All of the music on this program is from the recording Benedicta, and features an interview with the Prior of the Monks of Norcia, Fr. Cassian Folsom O.S.B. The recording is on de Montfort/Decca, and is CD B0023153-02.   Special thanks to SiriusXM Radio, Rebecca Davis, and our friends at de Montfort and Decca.

The Benedictine Monks of Norcia live a quiet life of devotion at their monastery in the pre-Roman Italian town of Norcia, located in southeast Umbria beneath the slopes of the Sibylline Mountains. Norcia’s medieval walls embrace the 1st-century Basilica where Saint Benedict, father of Western monasticism, was born in 480; monks have cared for the Basilica built over this saintly birthplace since the 10th century. Theirs have always been hours of study, industry, prayer, service – and song. Monastic chant echoed off the walls of the Monastero di San Benedetto di Norcia for more than 800 years before Napoleonic laws suppressed this branch of the Benedictine order in 1810, closing the monastery. This caused a break in the continuity of music, with monks and their devotional singing not heard in Norcia for nearly 200 years. But when a Benedictine community founded in 1998 in Rome by Fr. Cassian Folsom sought a monastery, the town of Norcia welcomed the return of the monks to the birthplace of St. Benedict. Monastic song was once again heard in Norcia, Italy. And now the timeless sound of this chant can be heard far beyond the ancient monastery walls, with the Monks of Norcia having recorded an album, Benedicta, poised for global release by De Montfort Music, the sacred music label responsible for 3 of the top 5 classical imprints of Billboard’s Classical Chart.

About music and the Monks of Norcia, Fr. Cassian Folsom, Prior, explains: “Before I entered the seminary, I was a music student in voice at Indiana University, in Bloomington, which is a wonderful music school. I was only there for one year, so I’m really just an amateur with a smattering of formal training. But I love music, and music is essential to the monastic life because the Divine Offices, those moments of prayer during the day, are all sung. Chant is part of the air we breathe, and since we do it so often, it becomes very natural after a few years. Music is important to us, especially for the sake of the prayer. Even someone who listens to this without any background will be drawn to it, I think, by its pure beauty and its mystical quality.  This music has been sung over centuries and centuries.  In addition, these poetic texts have an extraordinary richness. So the combination of the melodies and the text can produce something quite extraordinary.”

Benedicta consists of songs honoring the Virgin Mary, including not only favorite Marian antiphons but also previously unrecorded chant versions of responsories and a piece originally composed by the monks (“Nos Qui Christi Iugum,” or “We Who Have Received Christ’s Yoke”). About the content of this repertoire, the choirmaster for the Monks of Norcia, Fr. Basil Nixen, says: “The selections focus on the life of Mary, Our Lady, by focusing on seven mysteries, or defining moments, of her life.” Some pieces are sung by the entire group, some by smaller ensembles of monks and others by soloists, imbuing Benedicta with a variety of sound. Recorded on location at the monastery in Norcia, the album was produced by Christopher Alder and engineered by Jonathan Stokes, both multiple Grammy Award winners. Alder who has just received his 11th Grammy has worked with the likes of Placido Domingo, Cecilia Bartoli, Gustavo Dudamel and many of the top names in today’s classical music industry.

“The repertoire of Benedicta is the chant that’s very much a part of monks’ daily lives,” says producer Christopher Alder. “For instance, when they finish a recording session, they don’t go back to their monastery and just relax – they stay here and keep chanting, because that’s what they do. This music really means something to them. They know the Latin texts forward and backward, and you can hear that in the sincerity of their singing. For myself, I notice that when I am recording them that I feel in touch with a distant past – and sense that it will never go out of date. It feels timeless.” Engineer Jonathan Stokes adds: “These monks are unique in the sound they produce, and we recorded them right there in their monastery. One of the biggest surprises was actually how charming they’ve been – there is no barrier or wall between them and us. They have just been artists interested in doing justice to the music.”

For the Monks of Norcia, music is woven into a daily life of liturgy and industry. Along with their offices of daily prayer, the monks work for their self-sufficiency – as Fr. Folsom says, “We are not angels, we are men – so we have to eat.” To that end, they operate a craft brewery at the monastery, Birra Nursia, where they produce a beer “pleasing to the taste and satisfying to the spirit.” These blond and dark brews have gained devotees from distant countries, bringing new visitors to Norcia. “A lot of people have perhaps a romantic idea that monks sort of float around in the cloister all day long,” says Fr. Folsom. “But in fact, the monastic life is quite ordinary. You get up and pray, you do your work, and you go to bed. The next day, you do the same thing. St. Benedict is, in a certain sense, the patron of the ordinary. To find the presence of God in the ordinary is an aim of monastic life. We have a very young community – the average age is about 33 or so. I am the oldest, with the others quite young. So there is a youthful vitality here to our alternation of work and prayer throughout the day, along with the togetherness of a fraternity – not like a college fraternity but a community of brothers.”.

1. Bells from the Basilica