You are here: Home / Playlists / From the Imperial Court

The new recording by the wonderful young English ensemble Stile Antico celebrates sacred music for the House of Hapsburg.

NOTE: All of the music on this program is from the recording From the Imperial Court: Music for the House of Hapsburg featuring the ensemble Stile Antico. It is on the Harmonia Mundi label and is CD HMU 807595 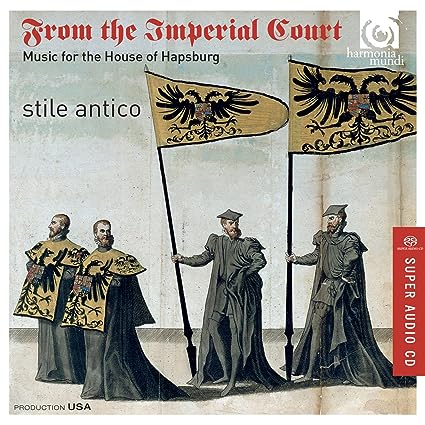 One of Europe's most extraordinary ruling dynasties, the Hapsburgs ruled greater or lesser portions of Europe from the 11th century until 1918, their heyday coinciding with the supreme musical flourishing of the 16th century. Their rule saw a particular increase during the reign of Maximilian I, secured first by his marriage to Mary of Burgundy in 1477 and then by the union of their son Philip 'the Handsome' with Joanna 'the Mad' of Castille. Thus his grandson Charles V essentially ruled Spain, Germany, Austria, Burgundy and the Low Countries, before he in turn divided his territories between his son Philip II and his brother Ferdinand of Austria in 1555-6. As these successive generations enlarged their power and territory, they gathered around themselves the leading artists of their time.

This remarkable dynasty, which at its peak ruled much of Europe and established the first truly global empire, is the inspiration for Stile Antico's latest recording, a fascinating and sumptuous journey through two centuries of Continental repertoire. Stile Antico performs music closely associated with the Renaissance Hapsburg monarchs Maximilian I, Charles V and Philip II, who gathered around them some of the finest composers of their day. We encounter coronations, celebrations and funerals, and meet the Hapsburgs at play and prayer, in music ranging from the the simplest of Josquin chansons to the intricacies of Isaac, and from Lobo's exquisite expression of grief to the exuberance of Morales and Gombert.