It was more than 40 years ago when Joel Cohen became our first in-person guest on the program; the Boston Camerata, now directed by Anne Azema, celebrates its latest collection for Christmastide.

Note:  All of the music on this program is from the recording Hodie Christus natus est: A Medieval Christmas featuring The Boston Camerata  directed by our guest, Anne Azéma. It is on the Harmonia Mundi label, and is CD number HMM 905339. 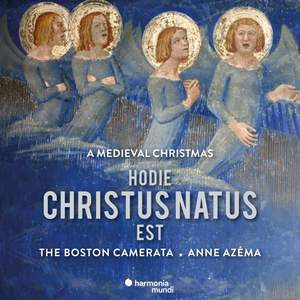 Christmas was and is a joyful holiday. But in modern times, regretfully, the social pressures around the season, made ever more intense by the strictures of the consumer society, can lead to a sense of forced and inauthentic celebration. Without falling into a sterile nostalgia, we do observe that in the past this liturgical season in the Western Church once had a more organic, and a less stressful  tonality.

The season undoubtedly contained, however, its own measure of anxiety. The medieval persona of Christ the Bridegroom, supreme Judge who will arrive at the moment known only to Him, selecting those chosen to receive salvation and rejecting those who are not ready to follow, is indeed sinister (‘Amen dico’). As the angel Gabriel warns (‘Oiet virgines’) we need to remain vigilant, and we must not fall asleep. This waiting period is given musical and gestural form in the liturgical drama ‘Sponsus.’ Both performers and audience understand what is at stake: the salvation of the human soul, or its damnation.

The season’s joy flows from the hope of salvation and eternal peace (‘Dominus veniet’), of desire for light (‘Lux refulget’). Above all, it was nourished by the presence of Mary, the loving mother, the advocate next to God for suffering humanity, and even an object of amorous desire. Others may discuss and re-discuss the theological question of her virginity. We as musicians, however, are obliged to honor the unique and hopeful place she holds in twelfth and thirteenth century art, poetry, and song, as we construct this program of medieval music for Christmas.

These works are drawn from different sources, varied both in style and geographical origin. The plethora of available material means that this particular recorded program represents only one possibility, among a myriad of others. In any case, Christmas is a moment when different tastes and  manners come together, and, when tongues loosen, so that different languages can be heard, macaronically, in the same piece (Latin and medieval Provençal, for example). The art of storytelling becomes important, staged in a real space (the ‘Sponsus’ play), or in the mind’s eye and ear (‘Dal ciel vene messo novello’).

At the root of all this varied creation is the liturgical song of the Church, even though this body of song in Latin could and did vary from region to region. Liturgical chant provided the backbone and the musical grammar of medieval musical creation. Progressively, medieval music will take on other stylistic aspects, thus giving birth to other forms and other kinds of discourse.

The Aquitanian polyphonic works from the center of France (‘Verbum Patris Humanatur’) are prime examples of these new developments. These works, on the surface quite simple, are in fact full of energy, and very innovative. In ‘Lux refulgent’, a virtuosic and energetic composition, the upper soloistic part dialogues with the lower line, which in turn, becomes dynamic and active. Other pieces recall the beautiful visual images of primitive Christianity, in which Christ is portrayed as a beardless shepherd youth. The exuberant polyphony of the processional ‘Gregis pastor’ evokes a spontaneous improvisation, one that some scribe had thought good enough to be written down. With such happy song we are far from the severe and terrifying vision of Christ the Judge.

Other pastor polyphonic songs you will hear are soft and tender (via the sweetening presence of thirds, much appreciated in the British Isles: ‘Veine pleine de duçur’, an English piece despite its French text.) Some are subtle and gracious, thanks to the Biblical imagery of their texts; in ‘Gedeonis area’, life-giving water flows from the rock, as in Exodus, XVII:6.

Some appear to invoke a different manner, one of which we know very little, that of medieval popular and folk music. When taken at a rapid clip, as we do, ‘Edi be thu hevene quene,’ a melodic tenor line with simple accompanying second part, appears to evoke a dance on the village square more than a monastic meditation of Complines.

Another example of style development and exchange can be found in ‘Flur de virginité’, a song of praise to Mary. Composed upon a pre-existing secular song, ‘Cantus domina “Aaliz/Alice”,’ it has been handed down to us two ways, each with a Marial text; one is in Latin, the other in French. It is not arranged in strophes, but rather through-composed, as each verse segment receives its own, original melody, composed of simple motifs, sustaining the dramatic declamation of the poem via music.

From the Iberian peninsula, and the court of King Alfonso X, ‘The Wise One’, comes a large collection of sacred songs, all in honor of the Virgin. The cantiga, ‘Por nos Virgen madre’, whose melody is derived from a Galician/Portuguese love song, describes the bonds of love among the Virgin, her son, and his father. Through the repetitions and subtle modifications of the short phrases, we experience a moving moment of prayer.

Musical narrations of the Christmas story are often built on simple, strophic melodies with refrains. ‘Dal ciel venne messo novello’, an Italian-language recounting of the Visitation, provides a good example of this approach. A soloist tells the tale, and the refrain groups others around her. This is a processional song, non-liturgical, inviting the faithful to take part.

These works come down to us with the singing lines notated. Concerning the participation of instruments in this repertoire, we know, simultaneously, quite a bit – and almost nothing. From medieval literary and visual sources we know that some singing was preluded, accompanied, sustained, and commented on by instrumental playing. The vielle or medieval fiddle was most often the accompanist of choice, followed by the harp. A handful of purely instrumental pieces have been preserved, but apart from their structure, almost everything needs to be imagined concerning their interpretation.

Professional performers/minstrels in the secular world needed to acquire many skills: playing an instrument, but also improvising counter-melodies, composing, narrating the great legends (Tristan, Arthur, and others) – in short, acquiring all the wiles of entertainment. For the alert instrumentalist, each style, each language, calls forth certain skills – vocal colors, playing techniques – appropriate to the given music and situation. The instrumentalist also develops approaches to accompaniment by learning from the evolving practices of early vocal polyphony. Together, singer and instrumentalist of today imagine what might have been. We are, of course, products of our own time and place. But by embracing the eternal freshness and energy of these repertoires, so distant from us in time, we discover the constancy, across the centuries, of human emotion, and we re-experience, as new, a profound joy. Nova gaudia. Merry Christmas!