You are here: Home / Playlists / Judith

Our friend Katarina Livlianić continues her study of late medieval Croatian mystery plays with an amazing new film of the story of Judith. 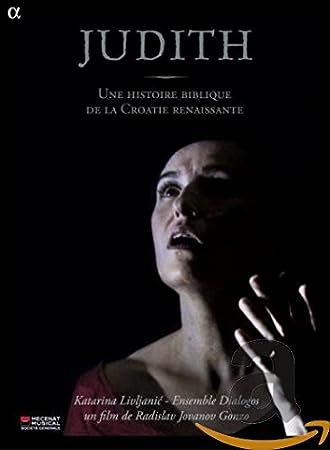 NOTE: All of the music on this program is from the recording Judith featuring Katarina Livljanić and the Ensemble Dialogos. It is on the Alpha/outhere label and is CD and DVD EDV-1857. For more information:
http://www.ensemble-dialogos.org/en/

A biblical story from Renaissance Croatia
Musical reconstruction: Katarina Livljanić
The biblical story of Judith, a Bethulian widow who kills the enemy Holofernes to liberate her people, became a cornerstone of medieval Croatian literature, set in verses by Marko Marulić, Dalmatian poet of the 16th century. Written in Croatian, in the way of old traditional Glagolitic poets, this story is one of the few texts that Marulić wrote in his mother tongue, probably intended for  a female audience which generally wasn’t familiar with the Latin language.

Story
Judith is a pious Hebrew woman, but she is also a beautiful and dangerous enchantress who infiltrates the palace of the Assyrian enemy, seduces the powerful general Holofernes and beheads him. The Agony of Judith tells this cruel story of Eros and Thanatos in an intimate and very intriguing way, using fragments of medieval disputationes from the Glagolitic tradition (also known as "agonies"), which alternate with the main story.  These interpolated episodes allow us to leave the main action for a moment and hear what is happening inside the characters’ minds:  just as Holofernes’ head separates from his body, his thoughts also "separate" into a very lucid dialogue between his body and his soul which happens in the moment of drunken sleep, before his death. A different inner dialogue - between Judith’s mind and her soul - occurs in the head of the heroine as she prays to God to help her kill the enemy who is in love with her.

Background
Musically, this project is a reconstruction, using Gregorian, Beneventan and Glagolitic sources of medieval Dalmatia, as well as the study of Glagolitic chant in oral tradition. The text of Judith survives without music but its metrical structure corresponds to a small number of archaic Glagolitic melodies used for storytelling in medieval Dalmatia, often in the context of the highly emotional and dramatic songs related to the Passion or rituals of the Holy Week. The text itself also refers to texts sung in the liturgical offices, so the task of reconstruction was to find, in related musical sources (Dalmatian and southern Italian), melodies corresponding to the suggestions of the original text.
In this research, it was necessary to study the most archaic layers of what is called Glagolitic chant. This liturgical repertoire, sung in the local vernacular tongue (Croatian Church Slavonic) while actually belonging to the Roman rite, was preserved in manuscripts written in the Glagolitic alphabet, used in medieval Croatia. Written sources mention the existence of this chant in Dalmatia as early as the 11th century, within the circles of clergymen who didn’t speak Latin. Yet, the particularity of the Glagolitic repertoire, passed on orally, is its survival up to the present day in a few locations along the Croatian coast, on the Dalmatian islands and in Istria.
***
In this musical monodrama, Judith & Holofernes, with all the personified demons inhabiting the inner world of their minds, are performed by a female voice playing several roles and using a wide spectrum of vocal nuances, a fiddle, a lirica (Croatian traditional stringed instrument tuned in a particular archaic manner) and archaic flutes. They build together a story which unfolds in growing emotional density, transposing this ancient tale, with its powerful and nostalgic Dalmatian melodies, into an intriguing theatrical context.