You are here: Home / Playlists / Monteverdi and His Circle IV 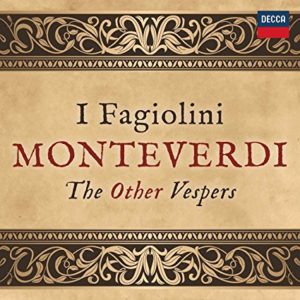 I Fagiolini (and the English Cornett & Sackbutt Ensemble) mark the ongoing celebrations of the 450th anniversary of the birth of the great Italian with a reconstructed Vespers from the composer’s later years.

NOTE: All of the music on this program is from the recording Monteverdi: The Other Vespers on Decca. It features I Fagiolini, The English Cornett & Sackbut Ensemble, and the 24 directed by Robert Hollingsworth. The CD number is 00289 483 1654.

Forming a response to Monteverdi’s timeless masterpiece Vespro della Beata Vergine (1610), these Other Vespers are centred around works from the end of his life, in 1640 following 23 years as maestro at St. Mark’s Venice. Including the celebrated Beatus vir.

A truly Venetian Vespers, arranged in a setting that could have been performed in Venice in Monteverdi’s time, with his sacred choral works alongside music of his contemporaries.

To coincide with I Fagiolini's 30th anniversary: the ensemble has always enjoyed a close association with Monteverdi.

Robert Hollingworth is a Monteverdi specialist; this is an authentic take on the repertoire, including the incredible soundworld of the cornetto muto alongside four male voices of I Fagiolini, in the Palestrina/Bovicelli Ave verum corpus - the first recording of such a reconstruction.

From Robert Hollingsworth: This CD and this year’s performances (Brighton/Edinburgh/Stour/Salisbury/Brecon and three more to be announced) during this Monteverdi 450th anniversary are offered to balance the usual bias in favour of the 1610 Vespers.  While ‘1610’ includes the five Vespers psalms suitable to feasts of the Blessed Virgin and other female saints, it does not include a full set for any male saints: these were included in Monteverdi’s 1641 publication, ‘Selva Morale e spirituale’.  A choirmaster at the time would have needed both publications and our selection is taken from the latter volume.

Our inspiration is the occasion on June 24th 1620 when Monteverdi was seen by a Dutch visitor directing the Vespers for the Feast of the Nativity of John the Baptist at a church away from St Mark’s.  The psalms chosen and the plainchant is for that feast.

As well as the main Vespers items, the recording includes intriguing extras: improvisatory violin sonata, sensuous Song of Songs motet, and most unusually divisions (ornamentation) based on music by Palestrina and performed by the ravishing soundworld of cornetto muto and four voices.

From The Guardian: To celebrate Monteverdi’s 450th anniversary, recordings, performances and even a staging of 1610 Vespers, are planned. This disc cleverly sidesteps that with a rich compilation of music that he and others wrote for the Vespers service. The 1641 collection Selva morale is full of amazing pieces, and these are gathered into a pseudo-liturgy that includes well-known works such as Beatus Vir alongside some strange rarities like a Palestrina motet with weird elaborations for cornetto. Gabrieli’s marvellous 14-part Magnificat is a highlight; all the performances under Robert Hollingworth using professional and younger voices are gently moulded, resonantly beautiful: a noble celebration.