You are here: Home / Playlists / Stile Antico: In a Strange Land

The latest recording from this popular group looks at those Tudor composers driven from their homeland because of their Catholic faith.

NOTE: All of the music on this program is features the ensemble Stile Antico. The recording is on Harmonia Mundi and is CD HMM 902266. For more information about this ensemble: https://www.stileantico.co.uk 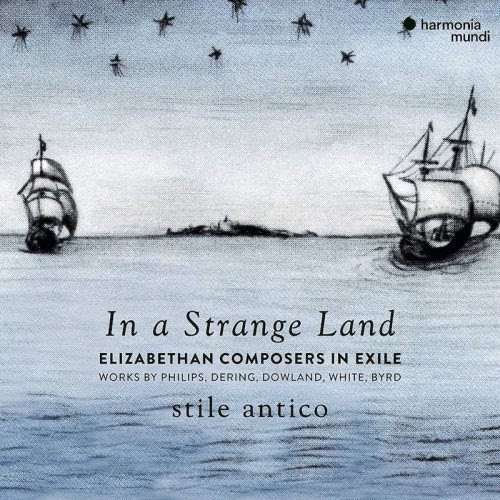 The regime of Queen Elizabeth I dealt harshly with supporters of the old Catholic religion. Torn between obedience and conscience, some of England’s most talented musicians – Philips, Dering and Dowland – chose a life of exile abroad. Others chose to remain in spiritual isolation in England, comparing themselves to the exiled Israelites in Babylon. Amongst them were Robert White, whose five-part Lamentations are one of the glories of English music of any age, and William Byrd, whose anguished Catholic music is referenced in Shakespeare’s enigmatic poem The Phoenix and the Turtle, vividly set by Huw Watkins especially for Stile Antico, and receiving its first recording here.
From MusicWebInternational:  The exile of the Elizabethan composers on this disc isn’t always geographical, though they did all spend some time outside of England. Instead, the principal form of exile is spiritual, because these composers were Roman Catholics, writing at a time when that was far from a safe thing to be.

The Elizabethan religious settlement imposed a broadly Protestant church on England and insisted on outward conformity from all with compulsory church attendance on a Sunday. The queen, it is said, had no desire to make windows into men’s souls, but she did impose fines for those who stayed at home, known as recusants. The system was troubled, though broadly successful, but life got harder for Catholics after a Papal Bull of 1570 condemned Elizabeth as a heretic and encouraged Catholic Englishmen to resist her laws and even to assassinate her. That didn’t stop the queen commending and supporting composers whose music she enjoyed, most notably that of William Byrd, but the music on this disc is written by Catholics who longed for the restoration of their mother church and, consequently, it’s filled with longing and unfulfilled yearning. In other words, it’s right up Stile Antico’s street.

I’ve long admired this group, as much for their intelligent programming as for their pristine sound, and this collection of unaccompanied choral numbers plays to their strength.

Those of us who are used to hearing Dowland sung by one plaintive voice and a lute will find this full choir performance of Flow, my tears to be very fattening, but it’s a luxury I could get used to, and it seems to accentuate the composer’s lachrymose hanging suspensions, jangling the nerves even more than usual. The same is true for In this trembling shadow, whose harmonies sound strikingly modern and unconventional.

The more conventional polyphony, if such a thing there be, sounds wonderful, the different layers spiralling around one another in the very suitable acoustic of All Hallows’, Gospel Oak. Most of the works focus on loss and anguish, explicitly so in Byrd’s Tristitia et anxietas, a lament for sin which is penitential while retaining beauty of nerve-jangling intensity. His Quomodo cantabimus, a setting of that most appropriate Psalm of exile, Psalm 137, manages to express desperate loss with music that is equivocated between minor key sorrow and major key resolution. Philippe de Monte sets a different section of the same psalm in Super flumina Babylonis, and it’s equally melancholy, if less sophisticated, in style.

Peter Philips’ two hymns to the Virgin Mary would not have been permitted under the Elizabethan settlement, but the sunny writing (and singing) makes them things of joy to revel in here. Like them, Robert Dering’s Factum est silentium is much more upbeat, and has flashes of Palestrina in its buoyant polyphony, describing the war in Heaven from the book of Revelation.

The one composer who breaks the mould is Huw Watkins, who is very much still alive. I found his setting of Shakespeare’s The Phoenix and the Turtle really appealing, moving from its hyperactive opening to a strangely moving closing threnody. It was commissioned for Stile Antico back in 2014, and they include it here because it’s suspected that the poem’s enigmatic text is an allegory of Catholic martyrs. Either way, it’s valuable to have it.

In some ways, though, they save the best for last. Robert White’s setting of the Lamentations is twenty-two minutes of polyphonic heaven. It’s more expansive than Tallis’ more famous settings, and it weaves a sensational spell around the listener. Sung with such purity, and recorded with such clarity, this is one of those musical moments when time stands still, and which reminded me why I like this sort of music in the first place.

Try it for yourself. It’s difficult to imagine how these performances could be bettered, so harmoniously blended is the choir, and the recorded sound is perfectly judged, as well as being of demonstration quality. The scholarly booklet essay seals the deal.