You are here: Home / Playlists / Requiem

We combine the new recording from Clare College, Cambridge (a Requiem service for All Saints & All Souls) with a tribute to the late Tom Zajac (who performed with Piffaro and many other ensembles).

NOTE: the first and last sections of this program are from the recording Requiem: Music for All Saints and All Souls with the Choir of Clare College, Cambridge directed by Graham Ross. It is on Harmonia Mundi and is CD HMU 907617. For more information: http://www.clarecollegechoir.com/ 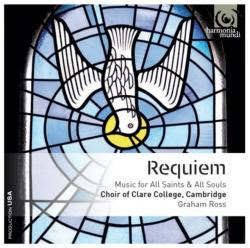 In memory of the faithful departed.
Graham Ross conducts The Choir of Clare College, Cambridge in a programme of English and Spanish music for the Feasts of All Saints and All Souls, culminating in Tomas Luis de Victoria's last published work, his six-part 1605 Requiem, regarded by many as one of the finest works of the Spanish Renaissance. Like it's predecessors in this Clare College, Cambridge series based on the major festivals in the Anglican calendar this volume is produced, engineered and edited by John Rutter and is accompanied by an excellent booklet note by Graham Ross.
Matthew Jorysz, Peter Harrison | Organ
Graham Ross | Director

The second section of the program features performances highlighting the work of Tom Zajac, from his many years with Piffaro. We have featured his worked with this ensemble and many others over the decades of the program. Congenial, collegial, and brave, he was universally beloved by all who came into contact with him. You may find all the recordings on the Piffaro web site (http://www.piffaro.org/) and we will include the tribute from Joan Kimball and Bob Wiemken of the ensemble:

Tom Zajac
A Letter from the Artistic Directors
It is with great sadness that we bring you the news of Tom Zajac’s death on August 31st. As many of you know from the updates in our concert programs this past season, he had been dealing for the past three years with aggressive brain tumors that evaded a number of surgeries and treatments. He was ever hopeful that those treatments would be successful, as they were for a short time, allowing him even this past season to perform in a few concerts. But ultimately, it was a losing battle. His wife Lilli was a hero as she supported, nurtured and remained with him constantly in these past few months. Many in the early music community rallied around him, and some, including Piffaro’s own Christa Patton, lent valuable hands-on aid to both Lilli and Tom.
Tom, the multi-instrumentalist par excellence, whether on recorder, bagpipe, sackbut, pipe & tabor, flute, and percussion of all sorts, leaves a big hole that no one person can ever fill. Aside from Joan and Bob, he was the longest standing Piffaro member. He joined the ensemble in 1989 and performed more concerts with Piffaro than any other member of the group.
In addition to his work as a performer with Piffaro and numerous other groups, he taught all across the country at early music workshops, and had a loyal following of students at the Amherst Early Music Festival, Madison Early Music Festival, The Texas Toot, The San Francisco Early Music Society’s Med/Ren workshops, and numerous others. For many years, he was on the faculty of Wellesley College, running the college collegium and fashioning creative programs for his students.
As former Piffaro member Adam Gilbert put it,
May the Heavens resound with the sounds of bagpipes, sackbuts, recorders, hurdy gurdy, pipe and tabor, and all manner of instruments today. I am sure they will have to knock out a wall in the Celestial Instrument Room to make way for our friend Tom Zajac and I know he will be waiting to share new tunes and tricks with us when we get there, to help us “come before his presence with singing.”
Joan Kimball and Bob Wiemken
Biography
Multi-instrumentalist Tom Zajac joined Piffaro in 1989 and performed more concerts with the group than any other member besides Joan Kimball and Robert Wiemken. He was a frequent guest with the Folger Consort, Newberry Consort, Boston Camerata, Cançonièr and the Texas Early Music Project. He toured extensively, and appeared in concert series and festivals in Hong Kong, Guam, Australia, Israel, Turkey, Colombia, Bolivia, Mexico, and throughout Europe and the United States. He can be heard on over 40 recordings of everything from medieval dances to 21st-century chamber music. With his group Ex Umbris, he performed 14th-century music at the 5th Millennium Council event in the East Room of the Clinton White House and 18th-century music for the score of the Ric Burn’s documentary on the history of New York. He played hurdy gurdy for the American Ballet Theater, bagpipe for an internationally broadcast Gatorade commercial and serpent in a PDQ Bach piece live on Prairie Home Companion. He also performed on santur, miskal and zurna with the Boston-based Turkish ensemble, Dünya. In August 2011, he was invited by the Polish government to take part in a research visit to hear and meet Polish early music ensembles. Tom taught at recorder and early music workshops throughout the US, was on the faculty of the Madison and Amherst Early Music Festivals and directed the Medieval & Renaissance week of the SFEMS workshops as well as the early music ensembles at Wellesley College.
Sadly, Tom passed away in August 2015 after a long battle with cancer.