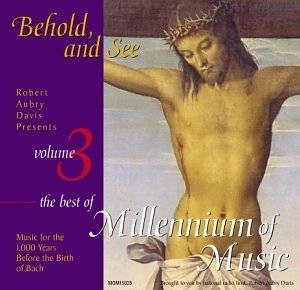 Millennium of Music host Robert Aubry Davis writes a meditation on Easter to accompany a selection of some of the program's most touching Passion music.

A Meditation on Easter

The Son of God died; this is by all means to be believed, because it makes no sense. And, He was buried and rose again; this fact is certain because it is impossible.
—Tertullian

Quintus Septimus Florens Tertullian (c. 160-c.220) was from Carthage, and the first writer in Christian Latin. It was he who gave us the word for the Trinity, “trinitas” evoking the three united in one substance, and defended the distinct nature of the Father and Son apart. He wrote against the prophecies of Montanus, who claimed that true revelation in the diverse body of teachings and writings called “Christian” must come from the Holy Spirit directly (of course, Montanus claimed to have these true visions, and, with a familiarity we still recognize 18 centuries later, told of the coming “millennium”). Sadly, this wise and very witty commentator (“We Christians have everything in common, except our wives”) eventually converted to the charismatic Montanist cause.

So, one of the most visionary and important early writers on the church is sometimes dismissed by the church. Even Montanus gave the early church a gift: the impetus to organize the loosely-collected texts and teaching of the church as a clearly defined canon, a “New Testament” to set against the body of writings that defined Judaism (the faith unique in the ancient world for its reliance on written text). But Tertullian’s chief vision, that this newborn faith is beyond the power of philosophers and scholastics, is often dismissed in texts (“he was a lover of paradox”).

The central fact of Christianity, however, is irrational. Despite our best efforts to demonize the world of Roman law and Jewish faith in which the incredible events of Jesus' life and death occurred, they were actually far more reasonable than the story that we, as Christians, accept as truth.

Roman law was a profoundly civilizing force; its decay was felt keenly by the early church fathers. Jewish teaching is based on the study and disputation about the ancient law and its meaning. The "loaded questions" that were used to tease and teach His followers, the parables and keeping of the Sabbath, the reading from the Torah in Hebrew (not His native Aramaic—Luke 4: 16-30) show Jesus behaved as a rabbi.

Of course, this new faith was and is different. And while the tradition from which it arose at its earliest may be clear, what was done to the Passover seder at the Last Supper marks an entirely original movement, a New Testament. The first written document of the young church was Paul's letter to the Corinthians, about 55 A.D. It reminds the faithful of a visit Paul had made to Corinth in the 40s, perhaps a decade after the events of Jesus' last days.

Paul reminds the Corinthians of the Last Supper, the Crucifixion and Resurrection. It is not only the first time these new events leave the oral tradition, but as our greatest living scholar of Christianity, Jaroslav Pelikan, points out: "Chronologically, and even logically, therefore, there was a tradition of the church before there was a New Testament. By the time the materials of the oral tradition found their way into written form, they had passed through the life and experience of the church, which laid claim to the Holy Spirit of God."

This, then, is the first act and meaning of Christianity. In our essay on the gradual evolution of the celebrations of Christmas (Alleluia This Sweete Songe: Millennium of Music Volume II), there was much to say about multi-cultural elements and folk traditions. Much has evolved that is sentimental and lovely, as well as foolish and tragic in the history of the Christian faith. There is a natural tendency to humanize something that is beyond comprehension. There are surely things in the story of Jesus and His life that we can understand and experience, aspire to and emulate.

Yet the defining moments of the faith are not among them. We may glimpse suffering and betrayal, sacrifice and even vision in our own lives, but what makes Jesus an entity Christians call the Redeemer is not rational; perhaps para-rational is a better coinage. So while it is all well and good to view Jesus as an inspired man who was a great teacher, who had a band of followers who genuinely believed in Him and tried to do what was best at a difficult time, this alone is not Christianity.

To be a Christian is to accept the first teaching, a wholehearted embrace of the impossible: a willing death, a resurrection, a promise of redemption. No theology, no doctrine, no practitioner or mystic, no composer or artist, no church or sect or belief or even faith is greater than this one impossible Truth. Unique in world faith is a founder whose very life is defined by His death and its meaning. But so it is with Christianity, and these defining moments are the theme of the music on this recording.

For all the art and letters, all the thought and doctrine, all the poetry and music, what is true about Christ cannot be glimpsed by the mind. This is what Tertullian understood so well. As Cambridge Divinity Professor Henry Chadwick wrote: “To him the divine character of Christianity was vindicated not by its reasonableness but by the very fact that it was the kind of thing no ordinary mind could have invented.” So, let us give the last word to Tertullian: "As the wisdom of the world is foolishness to God, so also the wisdom of God is foolishness in the world's esteem."