You are here: Home / Playlists / A Room of Mirrors 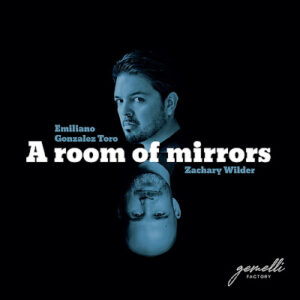 Tenor Emiliano Gonzalez Toro joins us with collaborator Zachary Wilder with his latest recording dedicated to the contrast, confusion, and ”broken mirror” of the early 17th century.

NOTE: All of the music on this program features the ensemble I Gemelli directed by our guest, Emiliano Gonzalez Toro, joined by tenor Zachary Wilder. This is on the Gemelli Factory label and is CD GFA001/1. For complete information about this ensemble:

From Early Music Review: A Room of Mirrors is the initial release of the Gemelli label, which takes its name from the ensemble co-founded by Mathilde Etienne and Swiss tenor Emiliano Gonzalez Toro in 2018. He is one of the most stylish and accomplished singers of early 17th-century music, having underlined the point as the Orfeo de nos jours in the outstanding Naïve recording issued in 2020. In addition, Gonzalez Toro is one of the best singers of the haute-contre repertoire in French Baroque opera.

The title reflects the place played by mirrors, either in a literal or metaphorical sense, in early Baroque thinking, a topic explored in an interesting note by Etienne. She doesn’t mention the importance of the mirror as a familiar trope in Baroque opera and after listening to the CD it would be possible to expand her thoughts. For example, a number of the works here are duets in which Gonzalez Toro is partnered in exemplary fashion by Zachary Wilder, the prevalence of imitation introducing a form of mirroring of the voices. Then the opening track, the familiar and irresistibly catchy ‘Damigella tutta bella’ by the otherwise little-known Florentine court composer Vincenzo Calestani (1589-after 1617) has an first half that is mirrored by the final section as the ardent lover plied with the wine of desire becomes the over-satiated lover who has fallen out of love with the ‘damsel fair and pretty’, the damigella tutta bella. One of Gonzalez Toro’s great strengths as a singer of this repertoire is his ability to colour and interpret the all-important text and the subtle manner in which he contrasts the emotions of ardour and scorn is an outstanding example among many that could be identified in the collection. He revisits Orfeo in a setting of the eponymous hero’s ‘Dove ten’vai’ from act 3, scene 1 by another unfamiliar name, the Prague-born Francesco Turini (1595-1656), who spent most of his career as organist of Brescia Cathedral. Here set as elaborate duet, Orfeo’s rhetorical questioning is paradoxically answered by the second tenor in imitation. The most represented composer is Sigismondo d’India (1582-1629), a prolific composer of vocal music and, with Monteverdi, one of the leaders of the so-called ‘secondo prattica’. Unlike Caccini, d’India’s adoption of the modern style did not mean eschewing counterpoint and the rich dissonant harmony of the duet ‘Giunto alla tomba’, a lament drawn from Tasso’s Gerusalemme liberata, makes for one of the most intense experiences of the recital. A reminder that this was a period of experimentation comes with the extreme, even bizarre dissonance of ‘Intenerite voi’, one of several examples of a lover’s appeal to a haughtily insensitive young woman. Another form of mirroring comes with the judicious contrast of serious with lighter or even comic songs. Among the last named is Biagio Marini’s ‘La vecchia innamorata’, in which the singer contrasts the attentions of an ugly old woman who loves him, with the girl who ‘gives me pains’ in a manner that would shortly become familiar in many a Venetian opera. The comedy is brought off with consummate skill, as is the lavish ornamentation in Frescobaldi’s ‘Se l’aura spira’, perhaps the most graciously enchanting music in the collection.

In addition to the vocal numbers, I Gemelli – which here consists of a continuo group with pairs of gambas and violins, recorder and cornet – contribute extremely well-executed performances of several instrumental pieces, among them Dario Castello’s striking Sonata Quarta and d’India’ s ‘Langue al vostro languir’, for which since the text is published in the booklet comes as something of a surprise. An outstanding recording that serves not only to illustrate the richness of the repertoire but also enhance the reputation of Emiliano Gonzalez Toro and I Gemelli as being in the vanguard of its interpreters.