You are here: Home / Playlists / A Spanish Nativity

Our guests Stile Antico turn to the sensuous musical world of Renaissance Spain with a superbly rich and luminous mass by Alonso Lobo, based on a motet by Guerrero and intended for performance at Toledo Cathedral. Interspersed between its movements are an exuberant ‘ensalada’ by Mateo Flecha, inviting us to be present at the nativity through the use of traditional dance rhythms, beautiful Christmas miniatures by Tomás Luis de Victoria, and classic villancicos – Spain’s answer to the traditional carol.

NOTE: All of the music on this program is features the ensemble Stile Antico. The recording is on Harmonia Mundi and is CD HMM 9022312. For more information about this ensemble: https://www.stileantico.co.uk 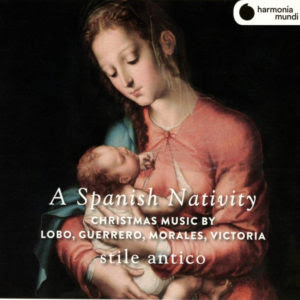 The Spanish ‘Golden Age’ witnessed an astonishing musical flowering, fully worthy of the nation’s new-found preeminence on the world stage. Focusing on works for Christmas and Epiphany, Stile Antico explores this glittering musical treasury, drawing together an irresistible mix of sumptuous polyphony and infectiously joyful folk dances. The centrepiece of the is the superbly rich and luminous Missa Beata Dei genitrix Maria by Alonso Lobo. Interspersed between its movements are motets by Tomás Luis de Victoria, Francisco Guerrero and Christóbal de Morales, an exuberant ‘ensalada’ by Mateo Flecha, and classic villancicos – traditional carols using folk melodies.
From Music Web International: Stile Antico are no strangers to making Christmas discs. Their previous festive outings have featured English and Northern European repertoire, so it’s a refreshing change that, for this one, they explore the entirely different musical culture of the Mediterranean.

The Spanish Golden Age is a glorious theme to have. This is a predictably lovely disc, but it’s also admirably varied, featuring not only glorious church polyphony, but also lively Spanish language carols, including the famous Ríu, ríu, chíu. In fact, I started the disc with that, partly because I’d once sung it in a choir myself. It’s attractively rhythmic, a world away from the staid world of the Spanish church, but that’s the point. In this disc Stile Antico are trying to lift the lid on what we think we know about Spanish Christmas music and revealing a few surprises underneath.

Chief among those discoveries is the villancio, of which Ríu, ríu, chíu is the most celebrated. Villancios were literally “peasant songs”, a secular form that came to be adapted for the church after the Counter-Reformation. They’re in the vernacular, are much simpler in structure and often use much smaller forces. The ones that Stile Antico have chosen are really rather lovely, and regularly reminded me of our own English carol tradition with their bounce and easy singability. For example, Guerrero’s A un niño llorando is endearing and light as his Beata Dei genitrix Maria is elevating, and he’s a relatively rare example of a composer who could do both the villancio and the Renaissance polyphony equally well. Rimonte’s De la piel has a lively beauty as it describes the good shepherd who looks after his sheep, maybe the same one Flecha had in mind in Ríu, ríu, chíu!

We even get treated to an ensalada (literally a salad!) from Flecha el Viejo. This genre tended to combine rhythms, moods and even languages: Flecha’s begins as a setting of the Jubilate, but turns into a very entertaining hotchpotch, written for only a small number of male voices, which rattles through a range of languages and similes, including one where the Virgin insults original sin as a “French fool”!

The polyphony is a marvellous contrast to this, thought after the Spanish fun it’s almost a footnote to mention the biggest work on the disc, Lobo’s Missa Beata Dei genitrix Maria, whose movements appear interspersed between some Spanish numbers, a regular Stile Antico trick. The mass is lovely. The Kyrie is highly serious, but there’s a spiralling sense of polyphonic variety in the Gloria, and the Credo has a focused narrative power. The deeply meditative Agnus Dei then makes a beautifully spiritual way to end the mass.

However, after the surprising discoveries of the villancios, we also get confirmation of what we already know. Victoria’s famous motet O Magnum Mysterium sounds as magnificent as ever here. The choir sing it as though they are unfolding – or maybe I should say discovering - the great mystery of the incarnation for the first time. There’s a sense of wonder to the singing that’s partly due to the leisurely pacing, but also the sense of space and air around the words. It’s a tingle-inducing way to begin the disc, and even the closing Alleluia is taken so slowly as to turn it into a meditation rather than a celebration.

In terms of artistic focus, this disc is all of a piece with Stile Antico’s previous Christmas discs; but it’s also pretty unique in its varied unmasking of Spanish Renaissance musical culture and, as such, is an indispensable addition to this year’s raft of Christmas releases.