The director of the Ora Singers returns to share music from the Passion and into Easter; part 1 takes us into Good Friday .

This is a special two-part program. To hear part 2, click here.

NOTE: All of the music on this special program was chosen by our guest, Suzi Digby. From Suzi:

Easter week, to me, is about hope. And rebirth out of destruction. Somehow, the symbolism of it seems more relevant in today’s world than it has ever in my lifetime.

The suffering of Christ and his subsequent resurrection symbolises the ultimate hope that man will be redeemed from sin. It’s the time of deep penance and of the greatest joy.

Nothing in the history of Western Music has inspired greater choral music, by a long way. It’s a time when us choral folk enter a period of ecstasy of music-making unlike any other.

In today’s programme, I’ve not exclusively focussed on choral music, but it’s the settings of the Easter texts that really drive into the deep recesses of the soul.

The fact that composers over the centuries have found such inspiration in the Easter story, renders it an almost impossible task to select music for a single radio programme. Not to mention choosing the best recordings. So I’ve made a stab at it today in 3 sections. The first is Penitential: Palm Sunday and Holy Week; then we move on to the crucifixion and finally the glory of the Resurrection.

Through this music we experience the depths of pain and the greatest heights of joy imaginable.

I. Christmas to Candlemas (Choir of King’s College Cambridge, David Willcocks) (out of print) 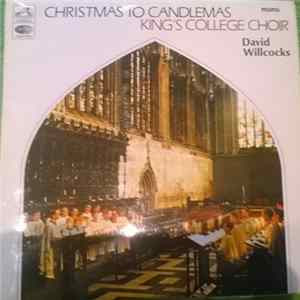 Thomas Weelkes: Hosanna to the Son of David.

I’d like to open with the great English Renaissance composer, Thomas Weelkes, who died in 1623. He’s admired, in equal measure both for his secular madrigals and for his sacred settings.

Here, to ease us into Holy Week is his ‘Hosanna to the son of David’, sung by the choir King’s College, Cambridge and conducted by my mentor and dear friend of several decades, the late Sir David Willcocks. 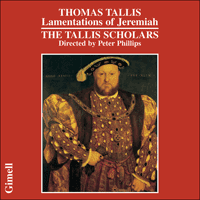 During the 1560s, there was an extraordinary flowering in England of musical settings of the Holy Week readings from the Book of Jeremiah. This was when, perhaps the greatest of all English composers, Thomas Tallis, set The Lamentations of Jeremiah, - five poems or chapters in the form of laments.

Each verse opens with the Hebrew letters ALEPH, BETH, GIMEL, DALETH, and HE.

Here is Tallis’s: Lamentations of Jeremiah sung by the Tallis Scholars, directed by Peter Phillips. 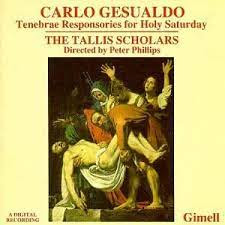 Moving across to the continent, at exactly this same period, the late 16th century, we have something very different indeed. I’ve chosen two settings of the same Tenebrae text by two very different composers: the Italian (weird, wonderful and wayward) Gesualdo, and the Spanish composer, Victoria.

I love this quote from my friend and colleague, the great musicologist, John Milsom, about Gesualdo: ‘Is this great music, or is it merely weird?’

Here is Gesualdo’s O vos omnes, performed by the Tallis scholars, followed by Victoria’s setting of the same text, performed, so passionately and ‘continentally’, if you like, by Westminster Cathedral Choir with George Malcolm conducting.

Now to one of my own recordings with ORA Singers: ‘Ecce Quomodo moritor justus’, the Tenebrae responsory for Holy Saturday. It’s a very early, anonymous setting from our album, Refuge from the Flames. 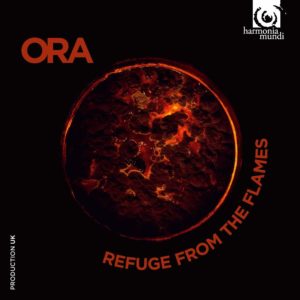 Now to one of the most iconic choral pieces of all time, Allegri’s Miserere. This is often associated with Ash Wednesday. A plaintive cry for forgiveness - and deliverence from persecution. It was composed probably in the 1630s but has undergone many mutations since. In our recording at ORA Singers, we present a hybrid of what was was likely originally heard in the Vatican and what it has become over the centuries. We leave the famous high Cs (which is a 20th century mutation) for the final 2 verses. 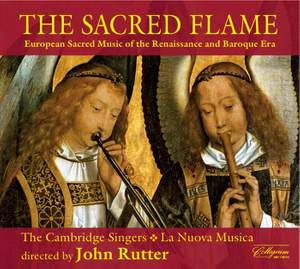 Now we come to Good Friday and the crucifixion,

My first offering is the beautiful Crux Fidelis, attributed to the 17th century King John IV of Portugal, although it wasn’t published until 19th century.

Here’s a translation of the text

Faithful cross, above all other,
One and only noble tree:
None in foliage, none in blossom,
None in fruit thy peers may be:
Sweetest wood and sweetest iron,
Sweetest weight is hung on thee.

Here is it, conducted by John Rutter and sung by the Cambridge Singers 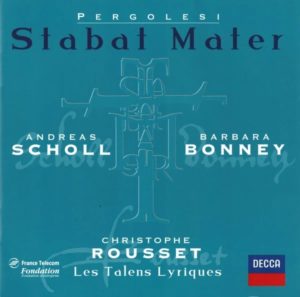 I’m afraid I can’t stop myself from including, for Good Friday, Pergolesi’s Stabat Mater. Pergolesi, the king of heart-wrenching suspensions, dead, from tuberculosis, by the age of 26. His incredibly famous Stabat Mater was composed in 1736, the year he died. I don’t know how many recordings of this I’ve heard over the years. It definitely goes into three figures, but this one stands out: 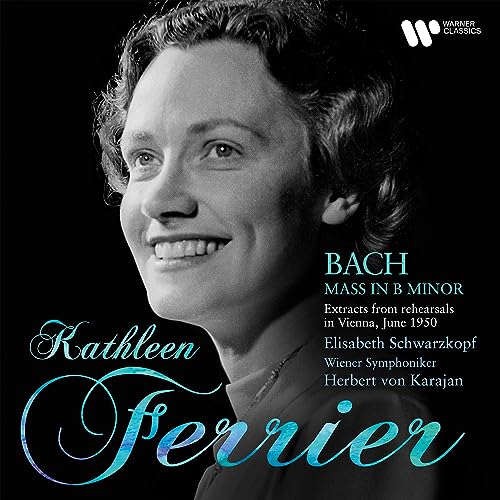 No Easter week programme of music can omit Bach’s St Matthew Passion. It’s a universe both of human experience and man’s relation to the divine. An almost impossible task to choose a movement from this mammoth 3-hour work, but I’ve gone for the aria Erbarme Dich.

The Polish poet and novelist Adam Zagajewski has called Erbarme Dich “the center and the synthesis of western music.” And the late Yehudi Menuhin called the violin obligato “the most beautiful piece of music ever written for the violin.”

In the Passion story, this aria reflects Peter’s solitary agony after he denies knowing Jesus three times: “Have mercy Lord, My God, for the sake of my tears”

It’s very, very difficult to choose a recording of this, but there is something so incredibly human and divine in the voice of the late Kathleen Ferrier, who died in 1953. Here she is, performing Erbarme Dich, under the baton of Herbert von Karajan.

[this exists exclusively as a live performance from the Sept. 18, 2011 live Berlin Concert] For more information: https://www.digitalconcerthall.com/concert/2448/?a=youtube&c=true. 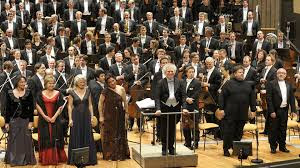 Lotti’s Crucifixus in 8 parts is another miniature masterpiece that has become an obsession over centuries for listeners and singers alike.

It was found in a manuscript in Dresden. Lotti lived and worked there from 1717-1719, although the work was probably written in Venice before that.

Again, it’s the build-up of suspensions and unbearably beautiful harmonies that make this is crushingly beautiful. Here it is, in an incredibly musical and powerful performance, sung by the Rundfunkchor Berlin, conducted by Sir Simon Rattle. 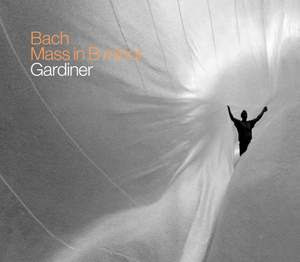 That was JS Bach: Et resurrexit (B Minor Mass) (JE Gardiner 2015 recording, made 30 years after his original recording of 1985).

This is also only available as a digital download. For more information: https://www.bachvereniging.nl/en

We’ve been put thorough the exquisite agony of the Crucifixion, and now we explode into the resurrection with this:

Bach wrote an Easter Oratorio, which is performed less than you might expect. The first version of the work was completed as a cantata for Easter Sunday in Leipzig on 1 April 1725

The work starts with two instrumental movements that are probably taken from a concerto of the Köthen period. Here is the first, which will make your heart soar.

I love the raw energy and beautiful phrasing of this performance.

I’d like now to go back, full circle, to the English Renasaiance and John Taverner, who died in 1545 and one of his two settings of: ‘Dum transisset Sabbatum’ for Matins on Easter Sunday.

Nothing provides greater respite from this noisy, crazy world, as we contemplate the extraordinary significance of Easter week.

Let the Tallis Scholars, conducted by Peter Philips transport you, with Tallis’s glorious setting of this text:

And when the sabbath was past, Mary Magdalene, and Mary the mother of James, and Salome, had bought sweet spices, that they might come and anoint him. Alleluia.

And very early in the morning the first day of the week, they came unto the sepulchre at the rising of the sun. 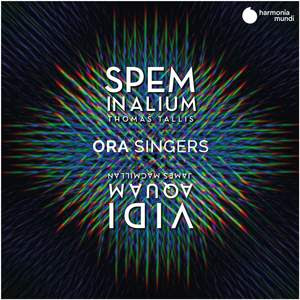 I’ll Leave the last word with Sir James Macmillan and the final bars of his Vidi Aquam in 40 parts, which I commissioned for ORA Singers. This alleluia counts (to my ears) among the most joyful, uplifting moments in all music.

This is a special two-part program. To hear part 2, click here.