You are here: Home / Playlists / And Three More from the Middle Ages

The play of the Three Marys, music from the vièlle, and an amazing look at music from Medieval Denmark. 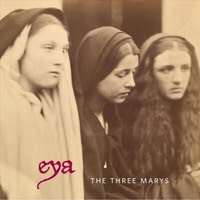 Eya recreates "Les Trois Maries," an early 14th-century liturgical Easter drama originally conceived and performed at a Benedictine convent in Origny-Ste.-Benoîte, a small village in northern France. The drama illuminates the emotional journey of the three Marys as they prepare and make their visit to the sepulchre following the burial of Jesus. Composed in plainchant, "Les Trois Maries" is one of the most sensitively-wrought examples of liturgical drama from this period. It is the only example of this genre in which both Latin and the vernacular were used together, strengthening the emotional impact of this story upon its listeners, and deepening our connection with its heroines.

Accompanied on historical instruments, scenes are interwoven with medieval polyphony from the Tournai Mass, the Montpellier Codex, and the Bamberg Codex, in addition to traditional plainchant and instrumental improvisation, punctuating the dramatic arc of the story until its joyous finale.

Eya - featuring Crossley Hawn, soprano, Allison Mondel, soprano, and Kristen Dubenion-Smith, mezzo-soprano - is an award-winning vocal ensemble based in Washington, D.C. specializing in the interpretation of medieval music for women's voices. Launched in 2010, Eya has established its place in the Washington, D.C. community as an early music ensemble of impeccable vocal quality, deep spirit, and smarts.

Directed by Allison Mondel, Eya presents concert programs that interweave diverse repertories of the 12th through 15th centuries, from Hildgard von Bingen to Notre Dame to the flyleaves of early English manuscripts and beyond. Through this lens, these programs seek to tell a story that forges new points of connection between contemporary audiences and medieval repertoire, underlining our common humanity with these early poets and composers.

Eya's performers are some of the finest young early music specialists in the area and appear regularly with the Washington Bach Consort, Washington National Cathedral, Apollo's Fire, the Folger Consort, among others. Eya has performed at a variety of venues, notably at Dumbarton Oaks (Harvard University) for the opening of the special exhibition "Cross References," the Boston Early Music Festival Fringe, and Georgetown University, among others. This season, Eya made a special guest appearance with the Cathedral Choral society in a performance of Richard Einhorn's cantata Voices of Light, set to the exquisite 1928 silent film The Passion of Joan of Arc, in addition to releasing their first recording, Stella Serena, to be released this winter.

Audiences have praised the ensemble for its vocal beauty, fascinating programming, fresh and inspired interpretations, and musicianship of the highest standard. Most recently, Eya was the proud recipient of the 2013 Greater DC Choral Excellence Award for Best Specialty Group: Early Music.

Eya (pronounced "EH-yah") is a Latin exclamation of joy.

Baptiste Romain, director of the ensemble Le Miroir de Musique, has just been appointed professor at the Schola Cantorum Basiliensis. To mark this occasion, he enriches the ‘Instruments’ series on the Ricercar label with a recital devoted to the medieval vielle (bowed fiddle): troubadour songs and dances and polyphonic compositions from the thirteenth to the fifteenth centuries illustrate the various stages in the evolution of this instrument, the ancestor of the violin. After general musical studies focusing on violin and composition at the CNR Rueil-Malmaison, Baptiste Romain chose to specialize in the musical repertoire of the Middle Ages and Renaisance by practicing the bow vielle and bagpipes. After training at the Center for Medieval Music in Paris, notably with Marco Horvat, he studied at the Schola Cantorum in Basel, with Randall Cook, Dominique Vellard and Crawford Young, while regularly practicing ensemble music with Pierre Hamon at the National Conservatory of Lyon. He received his violin soloist diploma from the Schola Cantorum Basiliensis in 2008.
From Early Music reviews: Baptiste Romain devotes this recording to the different varieties of the medieval bowed fiddle, or vielle, with a selection of troubadour songs, dances and polyphonic compositions from the thirteenth to the fifteenth centuries. The exploration opens with the haunting sound of soprano Grace Newcombe singing Ar ne kuthe ich sorghe non, the well-known tune here with an English text replacing the original Latin (a ‘contrafactum’), copied around 1274. The voice is accompanied by a crwth (or crowde), a Gaelic relative of the Nordic lyre that was popular in England and Wales in the Middle Ages, competing for popularity with the fiddle. There are five tracks with a singer, the remaining 11 are instrumental, with Baptiste Romain playing vielle, rubeba, crwth, or bagpipes, supported by well-judged accompaniments (often with just one or two instruments) from members of the ensemble Le Miroir de Musique.
There are two pieces by Pedigon, a Provençal troubadour around 1200 who was famed for his playing of the fiddle. The only other named composers are Johannes Ciconia and Guillaume Dufay, each with one piece. The rest are all by the prolific Anonymous. A number of the pieces will be well-known to lovers of mediaeval music, but the interpretations here make this recording a worthwhile addition to your collection. The settings are refreshingly simple, with only the occasional burst of the percussion that can dominate medieval music making. The arrival of the bagpipe on track 12 is a bit alarming, but otherwise, the mood is generally reflective. This would make a very good introduction to the music of this period for those unfamiliar with it, as well as a must-have recording for aficionados. The other singers, alongside Grace Newcombe, are soprano Béatrice Dunoyer, mezzo Sabine Lutzenberger, and countertenor Paulin Bündgen. There are three other vielle players, together with harp and lute.

The CD notes give an excellent background to the development of the fiddle during the Middle Ages and, helpfully then describe the music in roughly the order in which they are performed – I wish more recordings would do this.

The project Mare Balticum aims to present the medieval musical heritage of the Baltic Sea region in the 12th-15th centuries. It consists of four musical programmes, prepared in great detail, and employing the newest musicological, philological, historical and organological research. Each of these programmes presents the local character of a different coastal region of Balticum, its specific historical and cultural situation, its most important saints and rulers, and the Christian roots of the relevant country. They provide an insight into the local literature and musical repertories of medieval Denmark, Sweden, Finland, Germany, and Poland; both Latin and the vernacular are represented, as well as the diversity of historical musical instruments used in those regions at the time. The project as a whole, however, aims to show something of the strong political and cultural connections between those medieval countries, their development over time, and the similarities between them, all of which are essential to our understanding of the common identity and history of Balticum, as is reflected to us through its centuries of music. (Agnieszka Budzinska-Bennett) As special guest we welcome Benjamin Bagby.
The first recording presents the oldest extant music from Denmark and will be issued by Tacet this November. If you’re interested in some suspenseful crime stories at 13th century Danish court (Meister Rumelant & Michel Beheim) or northern archaic polyphony in vernacular (DK-Kar 76), or simply have interest in less known medieval repertoires, then please support our project. This time ensemble Peregrina (Kelly Landerkin, Lorenza Donadini, Hanna Järveläinen, Baptiste Romain and me), will be joined by one of the world’s leading medieval music performers and scholars – Benjamin Bagby (Sequentia). It is a great honour to have Ben (voice & harp) as our special guest star. —Agnieszka Budzinska-Bennet
1 Mith hierthae brendher Danish song 02:59
2 O rosa in Iherico 2-part Danish song 01:20
3 Gaude mater letare 2-part song 01:40
4 Psallat fidelis concio sequence 06:27
5 Got in viel hohen vröuden saz German song 02:02
6 instrumental piece 03:37
7 Die Tenschen morder German song 05:20
8 Alle künige vürsten herren German song 02:30
9 instrumental piece 02:03
10 Gaudet mater ecclecia hymn 02:40
11 Ave martyr dux Danorum antiphon 01:56
12 Decus regni et liebertas V. Cetibus angelicis responsorium with prosa 06:11
13 Dulcis martyr dux Kanute antiphon 01:39
14 Preciosa mors sanctorum sequence 06:52
15 Von meiner mervart German song 14:27
16 Drømte mig en drøm i nat instrumental piece 04:00
17 Maria candens lilium 2-part song 05:09
18 Letificat laudatio 2-part song 01:45