You are here: Home / Playlists / Back to Iberia

Music for vihela and soprano, songs for harp, guitar, and baritone, and A Corte Musical’s “Lisbon Under Ashes: Rediscovered Portuguese Music."

The brilliant soprano María Cristina Kiehr, together with lutenist-vihuelist Ariel Abramovich, presents her first solo album devoted to Renaissance music. With her broad experience in sixteenth-century polyphonic repertoire (in La Colombina and Ensemble Daedelus, among others), and a project almost completely using her native language, Kiehr brings to the music of Spain’s Golden Age her own unique perspective.

Imaginario reconstructs an imaginary and unknown book of vihuela songs, inspired by the seven marvellous books published between 1536 and 1576, but this time as if published in Valladolid or Seville between 1570 and 1580. Constructed in the shadow of the earlier books, each one of its songs makes reference either in its music or text to another song from those earlier books.

The vihuelist Jacob Heringman, together with whom Abramovich created and recorded Cifras imaginarias (Arcana A428) is also part of this project, together with the mythical British tenor John Potter, ex Hilliard Ensemble and ECM artist, who performs an enigmatic piece for tenor and vihuela.

A unique project, in every sense of the word, this stretch of the imagination takes the recorded repertory of the Spanish Renaissance one step further, venturing into the world of musical fiction based on a blend of creativity and science, and with a team of researchers difficult to surpass.

From Gramophone:  Inspired by seven surviving vihuela songbooks published between 1536 and 1576, this programme proffers a newly imagined book ‘as if published in Valladolid or Seville between 1570 and 1580’, with arrangements by Ariel Abramovich and Jacob Heringman. The disc is also something of a solo Renaissance debut for María Cristina Kiehr, capturing her wonderfully clear and controlled tone in the most intimate combination: solo voice and vihuela. I have been a fan of her artistry ever since I first heard René Jacobs’s groundbreaking recording of Caldara’s Maddalena ai piedi di Cristo (Harmonia Mundi, 11/96), in which she sang the part of Magdalen. Yet, despite her distinctive soprano voice rarely venturing outside Baroque repertoire, this album, with its strong focus on Spain’s Golden Age, will quickly prompt a delightful recalibration of her repertoire.

Kiehr has a ceramic glaze to her delivery: smooth and cool on the surface but warm and pleasingly textured underneath. Her dark vowels create a rich tone that never falters but just occasionally – in Arcadelt’s Se per colpa del vostro fiero sdegno in particular – I would prefer more immediacy. Elsewhere she is supreme in bright, luminous textures: the refreshing wash of Arcadelt’s Chiare, fresche et dolci acque is superb.

John Potter – another long-term collaborator with Abramovich – is a welcome visitor in this programme, bound up as it is with his own specialism of Renaissance polyphony arranged for voice and lute. Referred to as ‘mythical’ on the disc’s official webpage (outhere-music.com), his warm and soft-grained voice brings a change of texture for Josquin’s Inviolata, integra et casta es Maria at the mid-point. 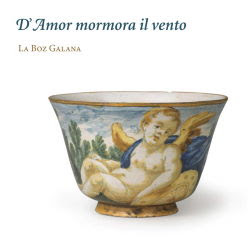 In this programme, La Boz Galana takes a journey through the popular idioms of Italian and Spanish composers who worked in Italy, among them Kapsberger, Landi, and other less well-known figures such as Arañés, Stefani and Milanuzzi. As a result of a centuries-old practice – the repertoires of frottole and strambotti, for example – these composers created a ‘lighter’ genre using popular musical forms based on poetic texts related to them, both Italian and Spanish. Meant to transmit the expressivity of exquisite poetry in conjunction with music, these short and seemingly simple songs appear as succinct miniatures embodying the boundless desire of amateur musicians to shape their intimate musical worlds and engrave the poems in their memories. These pieces were the ‘pop songs’ of their time, and are often true gems of their kind.
From Music-Web International: The subtitle of this disc suggests that the music is Spanish in character. However, most of the composers in the programme are Italian, and many songs have Italian texts. What exactly is the connection between Italy and Spain in the first half of the 17th century? For some centuries, parts of Italy were under Spanish rule, and this resulted in an influx of Spanish musicians in Italy. Whereas Spain was largely isolated from influences from elsewhere, such as France, there was quite some exchange between Spain and Italy. Spanish composers took profit from the fact that music printing in Italy was well developed, and this way their music became known in Italy. One of the main products the Spanish exported to Italy, was the 5-string chitarra espagnola. The songs included here are intended for performance to an accompaniment of this instrument.

Many song collections were advertised as notated in an alfabeto della chitarra alla spagnola. This refers to a fingering notation system for chords. In this system a single letter is assigned to each guitar chord, for instance the A indicating G major, whereas numbers above single letters refer to barré chords. This term is used to describe the technique of stopping all or several of the strings at the same point by holding a finger across them (as explained in New Grove). The number denotes the fret used for the barré. Some composers utilised letters for dissonant chords and acciaccaturas.

The guitar was mostly used for songs of a more light-hearted nature, such as villanelle and canzonette. These are usually written in strophic form and avoid heavy emotions. They were quite popular in the late 16th and early 17th centuries. Even composers of high stature such as Lassus, Monteverdi or Kapsperger contributed to these genres. The programme recorded by La Boz Galana comprises mostly pieces by Italian composers; only Juan de Arañes represents Spain. Most of the texts seem to be anonymous; at least the booklet does not mention the authors. There are some exceptions, though. Especially Miguel de Cervantes (anon, ¿Quién menoscaba mis bienes?) and Lope de Vega (Arañes, Dulce desden) need to be mentioned, as they were two of the main playwrights in 17th-century Spain.

Some of the composers are rather well-known. Kapsperger was already mentioned; he was one of the most brilliant players of and composers for the theorbo in his time, but also composed vocal music. Another composer of fame is Stefano Landi, who has become best-known for his opera La morte d'Orfeo of 1619. The lesser-known Carlo Milanuzzi published eight books of tuneful ariose, a genre that became very popular in his time. A prominent name in the programme is Giovanni Stefani. He was not a composer, but an editor. He published a number of collections of songs with an accompaniment of either basso continuo or the chitarra espagnola, which found a wide reception; three of them have been preserved. He did not indicate the names of the composers, and in most cases they have not been identified. That also goes for the songs from his collections selected for this programme.

The only Spanish composer on this disc is Juan Arañes, who was a priest and was for a short time active in Italy: in 1623 he accompanied the newly appointed Spanish ambassador to the Holy See. In 1624 he published a book with tonos and villancicos for one to four voices. The programme ends with what is certainly his most famous work, Agora que la guitarra, a chacona in four parts, and the first such piece for voices by a Spanish composer to appear in print. It has been (and is) regularly performed by Jordi Savall and his ensembles. Here we get a different perspective in a performance by a solo voice, a guitar and a harp.

This is probably the standard line-up for the kind of songs included here, although composers were mostly rather pragmatic with regard to the way their songs were performed. From a musical point of view the approach of La Boz Galana is pretty much ideal. Sebastián León has a fine voice that is perfectly suited to this kind of repertoire. I very much like the way he performs these songs, in an almost relaxed manner. He reminds me of the style of singing of Marco Beasly, who also often sings this kind of songs. Many of these songs are written in a dance rhythm and the rhythmic pulse is perfectly realised by the three artists of La Boz Galana. The style of playing of Louis Capelle on the harp and Edwin Garcia on the guitar is infectious. They not only accompany Sebastián León, but also play some instrumental pieces. Two of them are by Antonio Carbonchi, who lived and worked in Florence and was a guitarist himself. The anonymous Aria di Fiorenza sounds quite familiar; the tune is also known as aria del Granduca. The closing chacona by Arañes is introduced by an anonymous ciaccona which is full of dissonances.

This is a lovely disc that brings music to our attention that is little-known but very entertaining. The performances are simply superb, and therefore I urge curious minds, who like to broaden their musical horizon, to investigate this disc. I certainly hope to hear more from this outstanding ensemble. 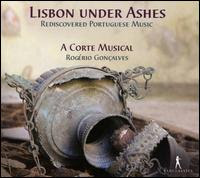 1755 was a somber milestone in Portugal’s history. An earthquake, followed by a tsunami, destroyed the city of Lisbon, taking thousands of lives with them. Among the many victims of these events was Portugal’s musical heritage. The entire music collections kept mainly in one of the wings of the Royal Palace were lost. Luckily, Portuguese music manuscripts from before 1755 are still preserved in other archives. This is the material used for this release. The program is representative of the different facets of the relatively scarce evidence of Portuguese music that survived the catastrophic loss of 1755: music in Portuguese, music by a Portuguese composer, music from the Portuguese colony, Spanish music in Portugal, and Portuguese popular music. The program of this recording revives these precious pearls of great importance, offering the public a rare opportunity to enjoy 16th -century “Portuguese songs” in a performance full of wit and vivacity.