Some Hieronymus Praetorius, a little Christina Pluhar and L’Arpeggiata, and one more seasonal peek from the great boxed set of Josquin and the Franco-Flemish School.

I. Josquin and the Franco-Flemish School.

Active in the fifteenth and sixteenth centuries, the composers of the Franco-Flemish School included such brilliant and diverse figures as Binchois, Dufay, des Prez, Obrecht, de La Rue, Isaac, Roland de Lassus, Willaert and de Wert. Spanning two hundred years of Western music history, the School flourished throughout the Renaissance as the language of music underwent the gradual shift from ancient modality to the tonality that signalled the dawn of the Baroque aesthetic.

As well as commemorating the central figure of Josquin des Prez (1440-1521), this set includes many other major works of the Franco-Flemish School, encompassing the various genres illustrated and developed by its members – secular songs in fixed or free form, motets, polyphonic Masses, psalm settings, and so on. These compositions are captured in all their striking beauty by such renowned performers as the Ensemble Gilles Binchois, Taverner Consort, The Hilliard Ensemble and The King’s Singers.

Polyphony at its peak, the proximity of the sacred and the profane and an astonishing modernity of thought – all these qualities explain why this music still has such immediacy for us today.

2021 marks the 500th anniversary of Josquin des Prez’s death on 27 August (c.1440-1521). His stature reflects the prestige enjoyed by the Franco-Flemish School in the European music scene of the fifteenth and sixteenth centuries.

In addition to its existing French lands, the Duchy’s possessions also eventually included the duchies of Bar, Lorraine, Luxembourg and Brabant, and the counties of Nevers, Rethel, Artois and Vermandois. The Franco-Flemish School takes its name from this vast expanse of territory. Architecture, sculpture, painting and music all benefited from Burgundian ambition and together disseminated a new vision of art throughout Europe as the continent moved into the era of humanism and the Renaissance.

In that vision mankind was considered as the peak of Divine Creation, and the duty of art was to glorify both human intelligence and its application to the creative act. On a musical level it was also seeking to communicate with the greatest number of people: this led to the development of a new kind of polyphonic song designed and adapted for private practice. 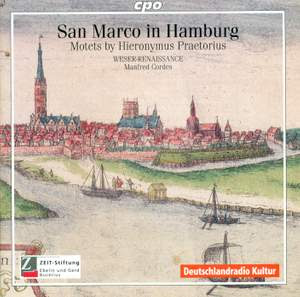 Hieronymus Praetorius could be regarded as the most important German pioneer in polychoral music, a genre that flourished in the sixteenth and seventeenth centuries when musical culture was at its height of excellence. His works would have been unimaginable without Italian influences and these motets clearly exemplify that, combining a fascinating mixture of old and new styles.

From Opera Today: A subsequent generation would be led by players such as Matthias Weckmann and Johann Adam Reinken, this latter a figure to whom J. S. Bach would bend the knee in his well-chronicled trip to Hamburg in 1720. At the earlier end of the spectrum stands the figure of Hieronymus Praetorius (1560-29), father of Jacob, the younger, and himself successor to his father, Jacob the elder, at the famed Jakobikirche.

This organ culture was bred by the prominence of the city’s churches, of which the Petrikirche, Jakobikirche, Catharinenkirche, and Nikolaikirche were especially significant. And in this environment some of the organists provided not only organ music, but also notable liturgical music in the form of motet and canticle. Such is the case with Hieronymus Praetorius, featured here in the CD anthology “San Marco in Hamburg.” The reference to “San Marco” acknowledges the strong influence of the Venetian school of Giovanni Gabrieli. The path from Germany to Venice was reasonably well worn, with the travels of composers like Heinrich Sch¸tz and Hans Leo Hassler often cited examples, but the rich sonorities of Venice captivated other composers who had never heard the music of San Marco in situ. This was the case with Hieronymus Praetorius (and also with the better known Michael Praetorius—no family relation), but if learned from afar, it is a musical style they assimilated with fluency.

In “San Marco in Hamburg” the ensemble Weser-Renaissance Bremen under the direction of Manfred Cordes explores the Italian-influenced motets of Hieronymus, and does so with a recording of distinction. Though some of the pieces are large-scale, Cordes compellingly takes them on with only 15 musicians—six singers singing one-to-a-part and 9 instrumentalists combining winds, strings, and continuo. The result is that in the sumptuous 12-voice “Jubilate Deo” that opens the recording, the sonic richness is a subtler taste to savor rather than a full-belted blast of power that overwhelms. And this holds true for the large number of 8-voice works, as well. Performed in this way, the clarity of motive, the unflagging attention to purity of intonation—such wonderful final chords in the sections of the “Magnificat”!—and general buoyance of the sound can come to the fore with very satisfying results.

The decorative passage work is well served by the one-to-a-part configuration, and in motets like “Cantate Domino,” this ornamental style sparkles as foil to the suave lilt of triple-meter tutti passages. Two of the motets, “Ab oriente and Wie lang” are performed as solo motets, with accompanying polyphonic voices played instrumentally. In “Ab oriente,” this gives a welcome chance to relish the fine control of alto Peter de Groot’s sensitive singing, and the plaintive ethereal sounds of soprano Monika Mauch in “Wie lang” offer one of the highlights of the recording.

The large-scale works of Hieronymus Praetorius (1560–1629) owe much to the great polychoral tradition mastered by Hans Leo Hassler and the great Venetian composer Giovanni Gabrieli. Hieronymus does not disappoint with his vivid expression of texts, intricate counterpoint, and sumptuously sonorous and inventive harmonies: this is Northern Germany’s noble response to the Italians, and to the Roman Counter-Reformation.

The programme displays his creativity and ingenuity across a number of compositional forms, from the grand polychoral works (performed here with various combinations of cornetts and sackbuts with organ continuo) solo choir and instrumental items, to plainchant alternatim featuring the great historical organ at Denmark’s Roskilde Cathedral.

This is the first release on the new Inventa Records label - both a specialist early music label and new home for the award-winning consort Alamire.

Hieronymus Praetorius (1560-1629) is perhaps best known for certain key 8-part works such the Christmas ‘Quinti Toni’ Magnificat and its associated carols Joseph lieber, Joseph mein and In dulci iubilo. However his large-scale polychoral works have until now received little attention, doubtlessly owing to the sheer number of forces required for their execution. His music has often been likened to the great Venetian polychoral tradition mastered by his near contemporary Giovanni Gabrieli whom he never met. Hieronymus does not disappoint, with his vivid expression of texts, intricate counterpoint, and sumptuously sonorous and inventive harmonies: this is Germany’s noble response to the Italians, and to the Roman Counter-Reformation. The programme displays his creativity and ingenuity across a number of compositional forms, from the grand polychoral works (performed here with various combinations of cornets and sackbutts with organ continuo) solo choir and instrumental items, to plainchant alternatim featuring the great historical organ at Roskilde in Denmark. 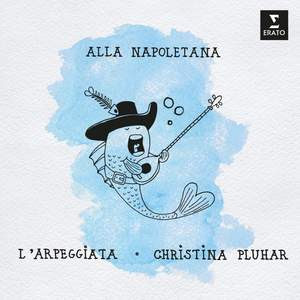 Christina Pluhar, L’Arpeggiata and eight guest singers explore the musical highways and byways of Naples, the most intoxicating and idiosyncratic of Italy’s large cities. Alla Napoletana, a double album, expresses the city’s mercurial personality in music from the 17th to the 20th centuries, embracing the operatic style of the so-called Neapolitan School, which rose to prominence in the late 1700s, and popular songs and dances. Among them are several examples of the tarantella, the lively, sometimes frenzied dance that epitomises southern Italy.

From SF Classical Voices: Who cannot fall in love with a quirky album that begins with the twangy sounds of the jaw harp and quickly segues into a nonsensically explosive, mile-a minute tarantella sung in a wild Neapolitan accent by male alto Vincenzo Capezzuto? Anyone searching for deeper meaning had best look elsewhere, because on Alla Napoletana (Erato), the 17th album from 21-year-old early music ensemble L’Arpeggiata, its marvelous founder/conductor/arranger and theorbist/harpist Christina Pluhar has again indulged in her special love for the unique, colorful, and bizarre.

On an album that boasts seven world-premiere recordings, color and joy come foremost. Recorded in March 2021, in the midst of pandemic lockdown, the sheer exuberance of a band of mostly young musicians rejoicing in their ability to briefly drop their masks to celebrate the music that sustains them is infectious.

Imagine viola da gambist Jordi Savall performing on laughing gas. While there’s some lovely and touching music on this album of 17th and 18th century tarantellas, folias, cantatas, arias, and canzone napoletane, Alla Napoletana’s centerpiece, the tarantella “Lo Guarracino” (The damselfish) — the raison d’être for the cover illustration — is as ridiculous as it gets. It’s the rapid-fire dialogue of a classic Sophia Loren movie put in service of a damselfish, sardine, limpet, tuna, and other species aquarian and beyond. Tenor Alessandro Giangrande proves the equal of any Rossini patter song specialist on record as he channels multiple personalities, voices, and accents.

Time and again, I found myself scribbling a sole descriptor, “A joy,” in my notes. Lovers of the human voice will have a field day with an album that showcases a male soprano, male alto, and countertenor in addition to the traditional soprano, mezzo-soprano, tenor (x2), and bass. Some of the voices, especially that of countertenor Valer Sabadus, are certifiably strange. I’m not sure you’d welcome such a voice in Bach’s St. Matthew Passion or Handel’s Messiah, but it seems to the manor born for Alla Napoletana. Then again, Sabadus’s duet with soprano Céline Scheen on Pietro Antonio Giramo’s “Chi vidde più lieto” (Whoever saw a happier and more contented man than me?) is heavenly, and male soprano Bruno de Sá’s take on Giovanni Legrenzi’s “Con cento’occhi” (With his hundred eyes) is equally lovely.

You’ll get a good taste of the range and color of voices, and the energy of the entire ensemble, on Cristoforo Caresana’s “La Tarantella.” The thing most wondrous about this performance is that, as unique as everyone’s contribution may be, everyone comes together in true democratic fashion, playing for all they’re worth yet clearing the way for Capezzuto’s lighter-voiced contribution.

I was happy to indulge in Pluhar’s full-course meal. Given all the madness in the world, Alla Napoletana seems like the perfect Rx for our times.