You are here: Home / Playlists / Desires: A Song of Songs collection

Note: For this month and next, we share interviews from our recent journey to England celebrating some of the great conductors and ensemble. Suzi Digby joins us with the latest from her Ora Singers, featuring “the sensuous and highly-charged texts of the Song of Songs." 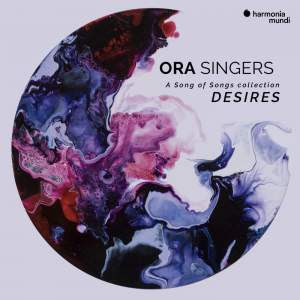 The wealth of compositions using the sensuous and highly charged texts of the Song of Songs is incredibly vast and rich. In the course of compiling this recording I re-discovered music that I have known for years, was introduced to pieces I didn’t know existed, and was privileged to commission a couple of works to add to this wonderful legacy of compositional material. Taken as a whole, the collection of pieces gathered here presents a varied and enlightening journey through the book of Song of Songs, and through the musical language of different centuries. I hope that both those that are well known and those that are new discoveries will encourage listeners to delve further into this miraculous repertoire.- Suzi Digby OBE
Suzi Digby OBE
was born in Japan and lived in Hong Kong, Mexico and the Philippines before settling in London & Cambridge. She is an internationally renowned Choral Conductor and Music Educator. She has trail-blazed the revival of singing in UK schools and the community over two and a half decades.

As a conductor, Suzi’s 2011 debut with the Orchestra of the Age of Enlightenment (Vocal Futures’ Bach’s St Matthew Passion) was met with outstanding critical acclaim: “Choral wizard”, “The mother of all music”, The Telegraph; “Sensitive and accomplished conductor”, Musical America; “A serious force for good within Britain’s music education system”, New Statesman. Suzi annually conducts 2,000 voices in the Royal Albert Hall in a scratch Youth Messiah which, last year, this was awarded Best Classical Music Education Initiative Nationwide by popular Classic FM vote. Suzi has conducted many major choral-orchestral works with, amongst others: BBC Symphony Orchestra, London Mozart Players, Orchestra of the Age of Enlightenment, Brandenburg Festival Orchestra. Venues at which she has conducted include The Royal Albert Hall; St John’s Smith Square; the Gstaad Festival; Ambika P3, London; St Martin in the Fields; St James’ Piccadilly; King’s College Chapel, Cambridge; and (with the Rolling Stones) O2; Glastonbury Festival and Hyde Park.

Suzi is a Trustee of Music in Country Churches, among other music and education charities. She is Past President of the Incorporated Society of Musicians and was Acting Music Director of Queens’ College, Cambridge (where she founded and runs the Queens’ Choral Conducting Programme). Amongst many TV appearances, she was judge in BBC1’s hit show, Last Choir Standing with over seven million viewers. She regularly adjudicates choral competitions and gives workshops and lectures around the world.

A Song of Songs collection