While we know De Wert for his madrigals, the Stile Antico ensemble shows us the sacred side of this 16th century master.

NOTE: All of the music on this program comes from the recording Divine Theatre: Sacred Motets by Giaches de Wert featuring Stile Antico on Harmonia Mundi. The CD number is HMM 807620. 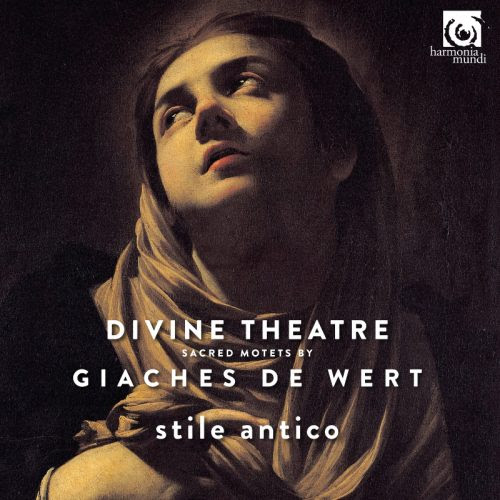 Stile Antico’s GRAMMY-nominated recording explores the fascinating sacred music of Giaches de Wert. Best known as a madrigalist, Wert is often cited as as a major influence on Monteverdi, but his religious works have until now received little attention. In this rich selection of motets, his skill as a composer of sacred music is established beyond doubt. A consummate word-painter, Wert was drawn to narrative texts, which allow his uniquely dramatic style full reign – most memorably in the stories of Christ calming the storm and the conversion of St Paul.
From MusicWeb International:

The Franco-Flemish master Giaces or Jacques de Wert should be ranked as one of the top six late-renaissance composers. There, I’ve said it and when you hear this disc you might think that the statement has been proven. This is largely because of the quality of the music chosen of course, but also this is due to these exceptionally sensitive performances.

You may, like me, have considered de Wert as more of a madrigalist, which is not surprising bearing in mind that there are at least ten books of madrigals, some published posthumously, as well as Canzonets. These have largely been recorded but there are some gaps. One of my favourites is The Consort of Musicke’s disc of Wert’s Seventh book of Madrigals on Virgin Veritas but not really available at present. But when composing sacred music, de Wert the madrigalist is trying to escape.

Perhaps it’s for that reason that de Wert seems to prefer somewhat unusual New Testament texts from the gospels. These have a storyline or narrative, which enables much word painting to take place, in which the virtuoso composer revels. As an example there is Amen, amen dico vobis (‘Truly. Truly I say to you that you shall lament and weep but the world will rejoice’). There is also Egressus Jesus which relates the long narrative of the Canaanite woman who implores Jesus to heal her daughter. Ascendente Jesu in naviculum is the most remarkable of all. This tells the story, as recounted in Matthew’s Gospel, chapter 8, of the disciples panicking whilst in a storm at sea and then Jesus calmly stilling the waves. Even the very opening ‘When Jesus had climbed into the boat, his disciples followed him’ allowed de Wert to use an unusual rising phrase, and as for the stormy waves and the calming afterwards, I leave that to tantalise your imagination.

From the point of view of music of deeply felt expression and pain the best known of all is quite rightly Vox in Rama, the text found in St. Matthew’s chapter 2 (‘Rachel weeping for her children and she will not be comforted’), a motet which can sometimes be heard in English cathedrals around the early Epiphany season. Almost equally expressive but little known is O crux, Ave (‘Hail the true cross’), a motet suitable for Holy Week.

The works selected by Stile Antico can be found in de Wert’s three books of sacred works of 1575 and 1581 containing mostly five and six voice pieces. Helpfully the booklet essay by Matthew O’Donovan throws much light on the composer’s contribution to church music and contains some useful musical analysis and gives us the names of the performers in each work.

Not all of the chosen pieces are serious. The opening joyful, Gaudent in Domine for five voices and the mellifluous Virgo Maria hodie are more formally polyphonic, even reminiscent of Palestrina. The counterpoint is very strictly even and closely imitative which de Wert would have remembered from his youth and possibly the works of Clemens non Papa and even Gombert.

De Wert was Monteverdi’s predecessor in Mantua and one can see how the expressive and daring harmonic qualities of his work influenced the later master. Stile Antico have a way of incorporating the many contrasts of style and mood found even within a motet so smoothly that it all seems so natural and even. The texts are animated with crystal clear diction and the long phrases held together with unending evenness and sense of shaping.

Sometimes sixteenth century sacred music is performed with a gloss and ease which converts it into evening background music over a candle and a hot dinner but Stile Antico make you prick up your ears and want to follow the texts. And the more you do the more you find to engage and amaze you. This after all is the role of the finest performers.

The recording in the spacious Victorian church in Hampstead is faultless and the disc comes in a cardboard case with a loose booklet inserted within. If I haven’t made my point already I urge you to search this disc out, it’s as good as they come.

Gaudete in Domino a 5 (tutti)