The performer/music director of the Ensemble Gilles Binchois has three recent projects: sacred music from the 13th century, forgotten polyphony of the 16th to 18th centuries, and a recording of his own compositions.

NOTE: All of the music on this program features the Ensemble Gilles Binchois directed by Dominique Vellard. For more information:
http://gillesbinchois.com/en/

The music of the Middle Ages exists today only thanks to the precious work of musicians like Dominique Vellard who is comitted to give life to the liturgical repertoire of the old monasteries. All across the medieval Europe, manuscripts – or codices – keep the chants of the offices. It is precisely in a codex, that of the Spanish monastery Las Huelgas Reales, preserved in the church, that the program of this new disc is born.The Ensemble Gilles Binchois draws on this great book to compose a moment of pure plenitude in the form of a journey through the centuries, bringing together a various set of vocal pieces, sometimes unique, sometimes tinged with European influences, proof that the music circulates during all the Middle Ages.The sound recording, most close to the singers, offers a bright resonance, inherent in the a capella repertoire, as an invitation to meditation.
It is with the words fons luminis that Johannes Roderici, the compiler of this manuscript, gives thanks to the power of God in one of his compositions. We have tried to drink from the spring he bequeathed to us in order to render anew its purity and force. This manuscript from the royal monastery of Las Huelgas in Spain has fascinated musicians and Medieval musicologists for nearly 100 years. The collection, put together at the beginning of the 14th century in this Cistercian monastery near Burgos, contains 179 musical works of great importance and variety. The texted music brings together archaic music, numerous works which come directly from the Notre Dame School in Paris, and compositions written specifically for the monastery (the nuns to this day have retained a vocal style which seems to testify to an uninterrupted tradition). The musical notation follows no system used at the time and instead uses elements of a number of different systems in a very pragmatic fashion. This complexity has posed a major headache to all those
who have attempted to tackle the works.
The Gilles Binchois Ensemble has often performed works from this manuscript and thanks to a new understanding of the notation – in particular, concerning the monodic part of the repertoire – they have decided to revisit it again basing their interpretation on these recent discoveries. Four female and four male singers from the ensemble will perform the Organums, Benedicamus Domino, conductus and monodic and polyphonic sequences, motets, planctus and the chants of the Ordinary of the Mass, thus reviving some of the masterpieces contained in this collection
1. Rex obiit et labitur Planctus
2. Casta catholica / Da dulcis domina Conductus à deux voix
3. Kirie, fons bonitatis Kyrie tropé à deux voix
4. Gloria, spiritus et alme Gloria tropé à trois voix et plain-chant alterné
5. Sanctus, cleri cetus psallat letus Sanctus avec trope à deux voix
6. Agnus dei, o Jhesu salvator Agnus en plain-chant avec trope à trois voix
7. Audi pontus, audi tellus Conductus monodique
8. Sanctus, veni redemptor gencium Sanctus tropé
9. Bonum est confidere Conductus monodique
10. Mater patris et filia Conductus à trois voix
11. Plange castella misera Planctus
12. Quod promisit ab eterno Conductus à deux voix
13. Omnium in te Christe credencium Conductus monodique
14. Claustrum pudicicie / Virgo viget melius / Flos filius Motetus à trois voix
15. De castitatis thalamo Conductus à deux voix
16. Benedicamus Domino cum cantico Benedicamus à trois voix
17. Virgo virginum Motetus à deux voix
18. Iocundare plebs fidelis Prosa
19. O Maria maris stella / O Maria dei cella / [Veritatem] Motetus à trois voix
20. O Maria virgo davitica / O Maria maris stella / [Veritatem] Motetus à trois voix
21. Benedicamus Domino Organum à trois voix 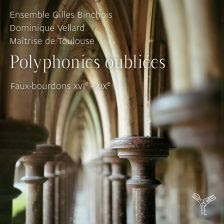 From the Middle Ages until the 19th century, plainchant was sung polyphonically all over Europe in a great variety of ways. It is no exaggeration to say that for centuries it epitomised the sound of church music for congregations. Faux-bourdon was a means of solemnising the Divine Office by embellishing the plainchant melody. This double CD featuring Dominique Vellard and the Ensemble Gilles Binchois is the result of four years’ work – four years, during which several thousand manuscript and printed examples were identified. It offers a selection of this music that reflects the variety and diversity of four centuries of French polyphonic plainchant. Dominique Vellard has been the inspirational driving force behind the Ensemble Gilles Binchois – more than three decades of research and performance that have led to the creation of some essential recordings in the field of medieval and early Renaissance music.
From Gramophone: Fauxbourdon is often seen as polyphony’s poor relation, suitable only for congregational Mass settings or choirs with too little rehearsal time. Frequently lacking the authority of authorship, these chant harmonisations have struggled to gain status. The booklet-notes for ‘Polyphonies oubliées’ go even further, claiming that fauxbourdons ‘cannot be regarded as musical works as such’ but rather ‘a collective means of expressing plainchant’. So why bother to record two discs of them?

Fauxbourdon represents perhaps the single longest continuous musical tradition in church music, one extending from the medieval period to the 21st century. Despite this, it is also the least recorded and studied genre. Enter FABRICA, a research project involving the Ensemble Gilles Binchois and academics from the universities of Toulouse. Over four years they rediscovered a lost repertoire in both research and performance, and this recording reflects the results in all their diversity, from the earliest improvised note-for-note harmonisations of the 16th century to the sophisticated fauxbourdon psalms and Magnificats of Charpentier and Sermisy.

In many ways fauxbourdon is a blank canvas, an invitation to each age to paint plainchant melodies with their own colours. By programming these two discs chronologically, the musicians offer listeners the opportunity to trace a gradual and evolving classical style, always with a melodic touchstone at their core.

Under director Dominique Vellard, the Ensemble Gilles Binchois prove their flexibility, stepping outside their usual sound world for the thick harmonies of the 19th century. Intonation, expression and ensemble remain an impeccable constant, and character and variety are aided by the contributions of the children’s choir Maîtrise de Toulouse. Would you listen to these discs straight through? Possibly not; but as a resource, an education, they are invaluable.

Dominique Vellard's compositions are rooted in his regular practice of sacred repertoire and the pieces he has chosen to set to music are, as for his first CD, 'Vox nostra resonet', released on Glossa in 2007, essential works of the liturgical repertoire.

It is, of course, the voice that is of prime importance in these compositions: men's voices take the role of traditional chantres, or cantors; women's voices having a more peaceful role or, joining with the five men's voices and thereby expanding the sound palette, colouring it with rich harmonics.

Dominique Vellard's writing, aside from the solo monodic parts, is always contrapuntal, this style of composition being entrenched in him owing to his familiarity with great Mediaeval and Renaissance repertoire. Furthermore, his concern for clarity of the discourse incites him to use a natural, clear prosody. To this liturgical material he has added two suites of short motets for solo voice and viols on the text of The Song of Songs, as well as the magnificent text of the 'Beatitudes' for two women's voices.

In concert, these pieces are meant to create a dialogue with early repertoire, leading the listener to perceive the newness and originality of this writing at the same time as its belonging to a long musical tradition. Since 1979 Dominique Vellard has been the inspirational driving force behind the Ensemble Gilles Binchois – nearly four decades of research and performance that have led to the creation of some of the essential recordings in the catalogue, especially of music from the Medieval and early Renaissance periods.