The lute book of the Dark Lord, transcriptions of Elizabethan works for gamba and accordion (!), and music for the 12-course lute. 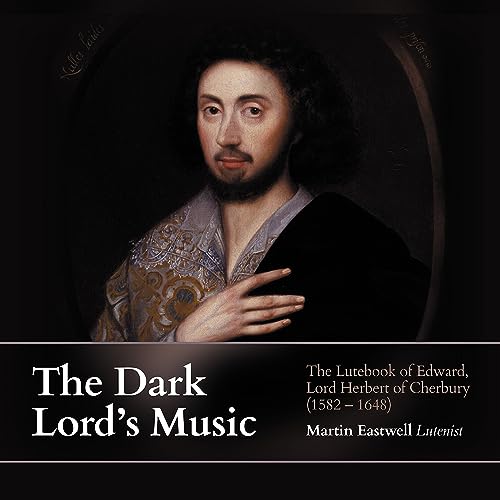 Edward, Lord Herbert of Cherbury (1582 – 1648) is one of the most extraordinary figures of 17th Century English life – brother of the poet George Herbert, but in his own right a diplomat, soldier, courtier, philosopher, poet, historian and musician, as well as being the author of one of the earliest and most entertaining autobiographies in English. In it, he tells us that he learnt “to sing my part at first sight in Musicke, and to play on the Lute with very litle or almost noe teaching….My learning of Musicke was for this end that I might entertaine my selfe at home  and together refresh my mynde after my studyes to which I was exceedingly inclined, and that I might not neede the company of younge men in whome I obserued in  those tymes much ill example and deboist.”

However, his lute book, preserved in the Fitzwilliam Museum in Cambridge, tells another story, for it is among the most important sources of English and Continental instrumental music of this period. Almost all the major English lute composers of the era are represented, while the large number of works by Continental composers is probably a consequence of Lord Herbert’s extensive travels and wide range of acquaintance throughout Europe. The book also contains extraordinary and otherwise unknown works by Cuthbert Hely and Lord Herbert himself, a last echo of English lute music’s “Golden Age”.

Herbert’s major philosophical work, “De Veritate…” remained on the Catholic Church’s “Index of Forbidden Books” until 1966 and has earned him the title of the “Father of English Deism”. Deism can be described as a philosophical position that asserts that the existence of a benevolent supreme being can be ascertained through observation of the natural world and the use of human reason but denies the direct interference of God in the world, and revelation as a source of knowledge in religion. It follows from this that Deists are generally hostile to organised religion, a dangerous position in the early 17th Century. To his contemporaries, he was known as “The Dark Lord Herbert” – both on account of his physical appearance, and the obscurity of his ideas.

Unexpected? The pairing of viola da gamba and accordion is certainly that! But perhaps even more surprising is how well the singing strings of the veteran instrument harmonize with the subtly vibrating reeds of the centuries-younger newcomer.

Also unexpected is this cross-generational meeting of two musicians (what are the odds?) who found each other exploring the ‘poetical humours’ of early-Seventeenth-century England.

Recently reunited in the recording studio after several seasons of rapturously received recitals, with this well-timed album the duo Les inAttendus makes its first entry into the Harmonia Mundi catalogue.

From Early Music Review: A review of this CD of music by 17th-century masters Tobias Hume, John Dowland, Orlando Gibbons, Michael East and John Bull and contemporary composers Thierry Tidrow and Philippe Hersant played on modern button accordion and viola da gamba probably has no place on the EMR website. However, I found the arrangements and the playing so charming and idiomatic that I decided to include it. The plain vibrato-free sound of the accordion (yes, they can switch off that offensive warbling effect!) blends absolutely beautifully with the viol’s elegant tone, and at times you forget you are listening to what on paper looks like a bizarre combination, and hear instead the sound of a viol consort or a viol and organ combination. Of the two contemporary pieces receiving their world premiere recordings, I preferred the Hersant, but actually the early music is the main strength of this CD. Both accordionist Vincent Lhermet and viol player Marianne Müller have a fine sense of the idiom of this 17th-century chamber repertoire. This CD is a testimony to the fact that fine musicianship and a feel for idiom can transcend the mere mechanics of HIP performance. I play clarinet in a duo with a button accordionist, and we shall now be exploring some of this earlier repertoire!
From MusicWeb International: Much is made of the seemingly incongruous combination of accordion and viola da gamba in this stunning recording, but as the sound hits you a little lightbulb goes off in your mind. Of course, a reed organ type of instrument plus strings – why not? The accordion in this case acts like a super-expressive harmonium, its overtone rich sound joining hands with the cello-like range of the viola da gamba, so that both can act as a melody instrument, harmonic support or bass line with equal effectiveness.

Marianne Muller (viola da gamba) and Vincent Lhermet (accordion) are interviewed for the booklet note, telling how they met both socially and musically at the International Summer Academy in Nice in 2015. Exploring repertoire, they soon found a kind of magic in the music of English composers from the 16th and 17th centuries, and there is some mixture of the ancient and the modern in this programme, with première recordings of pieces by Thierry Tidrow and Philippe Hersant adding piquancy to the Elizabethan pieces elsewhere.

There is a dolorous charm to much of the music here, and famous pieces such a Dowland’s Flow, my tears are given a gentle transparency through these arrangements. Contrast in this case comes from the more lively Can she excuse my wrongs, the accordion adding its strengths as a dancingly rhythmic powerhouse in proportion to the whole. Less familiar names such as Michael East and Tobias Hume brush up very well indeed in these performances, the echoes in the latter’s Touch me sweetely being very effective. The keyboard works of John Bull sound lovely on solo accordion, and the viola da gamba takes a solo in Tobias Hume’s Captain Hume’s Pavan, the melancholy voice of this instrument also taking up the dramatic poses in the music with poetic verve.

Thierry Tidrow’s Into Something Rich and Strange takes its atmosphere from Shakespeare’s ‘Full fathom five’ poem from The Tempest. High tones emerge from silence, and clustered dissonances and distorted melodic fragments illustrate the ‘magical and macabre’ in the text. Phillipe Hersant’s Lully Lullay grows out of a refrain heard in the Corpus Christi Carol, and as befits a cradle song, keeps up a gently rocking motion until ‘the wind starts to blow’ and things become shaken up with more virtuoso surprises and more emphatic variations on the theme. This is a tune that is now forever associated with Benjamin Britten, and the ethereal penultimate minutes with the gamba’s strumming come closest to that Britten ‘feel’, the concluding coda being almost a sea shanty.

This is a strikingly unusual recording and one which rattles around hauntingly in one’s consciousness long after being heard. The open cadence at the end of the CD in Dowland’s In darkness let me dwell is jaw-dropping indeed. If you love Elizabethan music and are intrigued by new sonorities then this is a field of rich pickings. There is plenty by which to be moved, and plenty to stimulate and tickle your intellect as well.

The Sonorous Lyre - a reference to the harp-like instrument of Classical Antiquity - takes the shape of the very resonant double-headed lute, a popular instrument frequently depicted by 17th-century Dutch and English painters. It is an instrument that is seldom heard today, sadly neglected in the lute renaissance of the 20th century. Swedish lutenist Anders Ericson has, for this recording, uncovered exciting original music, here presented for the first time to a modern audience. Born in Karlsborg, Sweden in 1976, Anders Ericson started playing electric and classical guitar at the age of eight. By the time he had reached eighteen he was playing the baroque lute and theorbo, and went to study at the Royal College of Music in Stockholm and the College of Music in Malmö graduating in 2002. Active as a continuo player and soloist, Anders has performed in major concert halls and opera houses in 25 countries all over the world, including the Wigmore Hall, Théâtre des Champs-Élysées and Tokyo International Forum. Anders is a member of the Drottningholm Baroque Ensemble and Göteborg Baroque.
From Lute News: The12-course double headed lute is thought to have been invented by Jacques Gaultier in England in the 1630s but it didn’t really catch on for long. The 11-course lute became the standard ‘French’ solo instrument and music for that developed across the century. Music for the 12-course lute didn’t develop to the same degree, so may have been seen as old-fashioned by mid-century. The lute itself had practically disappeared by 1700. Hence the repertory is not as extensive as that for the 11- or 13-course lute.

On this disc the Swedish lutenist Anders Ericson explores the repertory available for the 12-course lute. The CD contains music written expressly for 12 courses, as well as adaptations of 10-course pieces. Many of them are anonymous, several probably are by Gaultier on grounds of style. While the 11-course lute is tuned in D minor, the 12-course lute can be tuned in several different ways. The most common is D minor tuning and flat tuning. These tunings are on display on this CD which also contains 6 pieces in sharp tuning.

The 39 pieces are short: all but five are less than two minutes long. The music chosen consists largely of suites (preludes, allemandes, courantes and sarabandes) taken from the following sources: Panmure House lute book, pieces in G minor; Rostock lute book, in G minor; Sloane lute book, in B flat major; and Tabley House lute book in D minor. There are also three pieces by Jacques Gaultier himself (in D minor) and a charming set of six pieces (in D major) by Johann Gumprecht.

Overall this is an excellent CD. Ericson’s playing is superb and the sound quality is excellent. The balance between the diapasons and the upper strings is very good. I particularly liked the Gumprecht pieces, charming and tuneful as they are. His ‘Courante Patientia- Variation’ (track 35) was the stand-out piece for me. Gumprecht’s lovely Lyra Sonora (track 37) provides the title for the CD.

This is an essential CD for those who want to further explore and understand the lute repertory as it developed in the 17th century.