Funeral motets and the Deplorations of Josquin Des Prez featuring the Cappella Amsterdam.

NOTE: All of the music on this program if from the recording Miserere mei deus: Funeral Motets & Deplorations with the Cappella Amsterdam conducted by Daniel Reuss. It is on Harmonia Mundi and is CD No. HMM 902620. 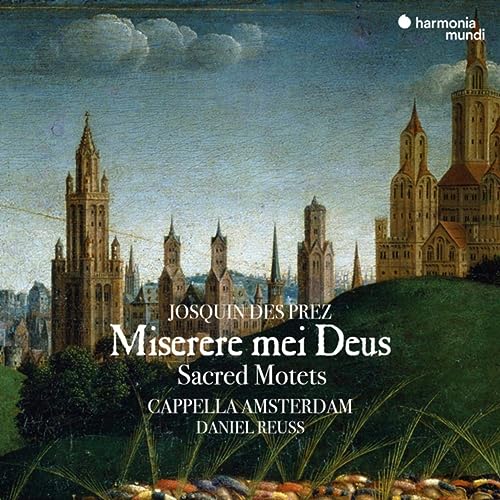 The art of lamentation.

‘To lament, to mourn, to memorialise: such was the new fashion at the very end of the fifteenth century’, writes Alice Tacaille. ‘The poet, in mourning the musician, attains an expressive intimacy . . . a eulogy of art that places the lamenting poet himself at the origin of the immortal memory which the artist will enjoy.’ Such is the case with the celebrated ‘Deploration’ on the death of Ockeghem, which, alongside Nymphes, nappées, forms a pair of superb musical epitaphs by the illustrious Josquin. With this programme combining secular homages and sacred polyphony, Daniel Reuss and the singers of Cappella Amsterdam launch a magisterial trilogy devoted to the Franco-Flemish masters of the Renaissance.

From ClassicsToday.com: You wouldn’t expect a disc of Funeral Motets & Deplorations to be as uplifting, looking at this release from Cappella Amsterdam with Josquin Des Prez’s music of that description. But uplifting it is. Not, obviously, in a happy, care-free way like watching a matinee of “Mamma Mia! Here We Go Again” at the Arlington Drafthouse with your girlfriends and a pitcher of Margaritas: “Uplifting” more in the sense that, rather than evoking sadness, the music evokes tranquility. Perhaps some of the difference in dealing with death in that time and place still spills over into our very different times? The accepting calm with which death was treated; the matter-of-factness of mourning; the optimism for a better life in the beyond that contrasted starkly with the rough going that even the luckiest humanoids had in the late Middle Ages and at the dawn of the Renaissance? (Josquin was born three years before the fall of Constantinople!)

Whatever it is, it is communicated with the utmost clarity by the singers of Cappella Amsterdam, caught in Amsterdam’s Waalse Kerk which offers moderate reverberation that makes the music glow but never sound “wet”. The poster boy of the “Franco-Flemish School” of liturgical music, Josquin (~1450-1521), who counted Martin Luther among his fans (the latter famously called the composer “the master of notes. They had to do as Josquin bid them. Other composers had to do as the notes bid them.”), twines his melodies around plainchants to moving effect. With perfect balance among the lines he mourns (praises) his senior colleague Johannes in the disc’s opening work, into which Josquin implanted a melody of Ockeghem’s. As a fitting closing measure Daniel Reuss and his 13 singers (four-to-a-part in the S-T-B setup, plus one alto) add Musæ Jovis, a piece that Nicolas Gombert wrote in turn to mourn Josquin. And just like Josquin quoted Ockeghem, Gombert now quotes a melody by Josquin, except a symbolic (for death) semi-tone lower. These are details one need not pick up on to be moved, such is the quality of execution.

From Stephen Midgely: This is a collection of ten motets by Josquin Desprez on the theme of lament and mourning. Some of the works, such as his ‘Déploration sur la mort d’Ockeghem’, ‘Nimphes, nappés’ and ‘Miserere mei Deus’, will be familiar to devoted enthusiasts of the composer, with a few other pieces less familiar and a couple of them unlikely to be by Josquin at all. They are performed here by the fourteen voices of the Cappella Amsterdam, directed by Daniel Reuss. I had not come across this ensemble until now; but, checking their website, this is probably because they have specialised mainly in 19th- and 20th-century music with, as it turns out, a fair number of recordings already under their belts. Be that as it may they are a very fine ensemble indeed, with a rich, full tone and a satisfying balance giving due weight to the lower voices; these qualities are especially suited to the music chosen for the present disc.
Daniel Reuss’s direction is stylish, sensitive to the music’s content and altogether outstanding. Fellow reviewer Sid Nuncius, writing on the Amazon UK website, refers to a certain lack of depth in the performances; I must admit I do not feel this, but would say rather that the emotion in the music is judiciously measured and controlled. The high quality of both voices and direction is immediately evident in the moving performances of the first two items (those named above). The following work, ‘In principio erat verbum’ in three sections, is rather in the declamatory style of ‘Planxit autem David’ and, like the latter, is most unlikely to be by Josquin; nevertheless it is a magnificent piece to which full justice is done in this performance. Two Josquin works follow, ‘Absolve quaesumus’ and ‘Absalon, fili mi’ - neither of them very familiar to me, but both beautiful.

Returning to the well-known and oft-recorded ‘Planxit autem David’, again this is of doubtful attribution. Josquin scholar David Fallows considers it more likely to be by Ninot le Petit. It’s true that it varies considerably from the great man’s style, and yet Josquin was nothing if not versatile; listening to its profound declamatory rhetoric, it’s tempting to think that few other than Josquin would have been capable of writing such a deeply moving work. Either way, Cappella Amsterdam’s performance is again outstanding. Josquin’s psalm setting ‘Miserere mei, Deus’ is also beautifully done, and the programme concludes with Gombert’s fine lament on Josquin’s death ‘Musae Jovis’.

Recorded sound, in the Waalse Kerk, Amsterdam, is excellent. The booklet essay is elegiac, interesting, technical but somewhat vague, with little detail on specific works and no mention at all of the dubious attributions outlined above – this latter a serious omission in my opinion. Texts and translations are supplied. In summary, this is a very fine Josquin programme indeed, well organised and strongly characterised by the profoundly serious aspects of the composer’s output. It is thus a significant addition to the Josquin discography, illustrating to moving effect his unique contribution to renaissance music.