Our annual collection of musical thoughts and reflections on the year passed (and the one to come).

I. A Renaissance Christmas (The Sixteen/Harry Christophers). Coro CD COR16167.

Following The Sixteen’s hugely successful album, “Song of the Nativity,” which featured Christmas music from the 19th, 20th, and 21st centuries, this new seasonal offering explores a stunning selection of festive works from the Renaissance. The Sixteen captures the joy and sincerity of the most wonderful of seasons, from the joyous simplicity of plainsong chants ‘Resonemus laudibus’ and ‘Veni, veni Emmanuel’ to the shining purity of Lassus’ polyphonic ‘Videntes stellam Magi’ and Byrd’s jubilant ‘This day Christ was born.’ This album provides a perfect alternative to traditional carols for those looking for something a little different at Christmas. “The Sixteen gives a masterclass in the art of unaccompanied singing, and in close emotional engagement with the pieces chosen… It puts the music front and centre, in this beautifully realized Christmas sequence.” (BBC Music Magazine)
From Andrew Benson-Wilson: The publicity blurb that came with this CD refers to it as “a perfect alternative to traditional carols”, and it certainly is. Perhaps trying to seek forgiveness for their 2015 release, The Complete Traditional Christmas Carols Collection (recorded in 1991), The Sixteen here concentrate on music from the Renaissance era. They bring their particular brand of highly professional choral singing to a well-balanced sequence of pieces from composers born between 1505 and 1580, a period when the Renaissance reached its zenith as religion in Europe reached one of its periodic nadirs.

The opening rather bouncy 14th-century song Resonemus laudibus (here given some nice little melodic additions) reappears in pieces by Eccard, Handl, and Lassus, helping to give a sense of continuity to the programme. Eccard and Handl’s versions use Lutheran chorale-like harmonisations as the basis for his polyphonySimilar bounce extends into Sweelinck’s ebullient Hodie Christus natus est.

A moment of repose comes with George Kirbye’s Vox in Rama. It was written for the 4th day of Christmas, the feast of the Holy Innocents, and tells the story of the massacre of first-born boys. Kirbye’s music is based on an earlier piece by Clemens non Papa. It is a particularly evocative piece, the intertwining polyphonic voices giving an air of serenity to one of the Bible less savoury moments. It is preceded by one of the oldest of all sacred melodies, the Advent Vespers antiphon Veni, veni Emmanuel, dating back to the time of Charlemagne in the 800’s.

It was recorded in St. Augustine’s, Kilburn in 2017, the generous acoustic adding a sprinkle of seasonal fairy dust, albeit with a recording that makes the singers sound a little distant. The pieces range from less the two minutes to nearly 10, the latter Tallis’s monumental Videte miraculum. One of the finest pieces (a difficult choice) is John Sheppard’s Reges Tharis, with its delightfully scrunchy little moments of harmonic and melodic tension, known as false relations. One gripe of mine, in concert and CD notes, is when the words do not follow the order of the music. However sensible these notes might be, they do bring on one of my gripes. Perhaps it is just a reviewer thing, but I think it might irritate anybody who wants to follow the music with the notes. Those with a more liturgical bent might also query why the usual order of Christmas events isn’t followed, the Advent Veni, veni Emmanuel, for example, coming after other pieces have celebrated the birth of Jesus. The Magi also appear before the shepherds – twice, in fact.

As usual, The Sixteen sing with an outstanding sense of consort and balance, with superb intonation. Their sopranos, a mixture of younger and more experienced singers, are particularly impressive, the clarity of their voices giving an almost boy treble-like quality in their Veni, veni Emmanuel verse.

Byrd
14. This day Christ was born

Andreas Hakenberger spent his entire professional career within the territory of the Crown of the Kingdom of Poland, remaining for 20 years as chapel-master at the Lutheran Church of St. mary's in Gdansk. Here he wrote his most outstanding works, a sequence of important motets written in cori spezzati, or polychoral technique. The rich tonal coloring obtained through the combinations of vocal parts is enhanced by the variety of the accompanying instrumentation. With astute use of imitation and rhetorical pauses, Hakenberger's music emerges as richly colorful, graceful and vibrant. There have been very few recordings of the music of Andreas Hakenberger. This release offers by far the most of his music yet to be issued, and contains all of the 55 motets preserved in the Pelplin Tablature. 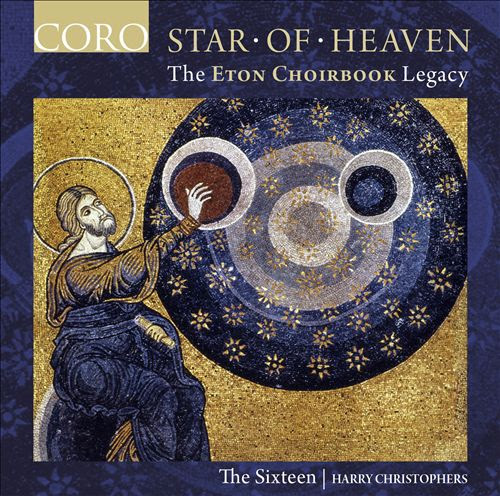 From AllMusic.com:  Harry Christophers and his choir The Sixteen have made something of a specialty of the Eton Choirbook, a collection of pieces compiled in the first years of the 16th century, representing music from the last decades of the 15th. It has otherwise rarely been recorded; the music is difficult both physically and interpretively, with long works that offer the listener few toeholds. You wouldn't think the clean sounds of The Sixteen would be ideal for it, but they do well. The music is sometimes taken to be a bit mystical with its swirling, featureless lines, but of course in the 16th century it wasn't mystical; it was rich and sumptuous. This is what Christophers gets. The Sixteen are properly bulked up here to between 18 and 23 singers (he could have gone even larger, for this is music of vast spaces), and he gives them free rein to put a little bit of roughness into their singing. This showcases the sensuousness of the big Salve Regina of Robert Wylkynson, which is a really spectacular performance and worth repeated plays. Christophers further reflects on the enduring resonances of the Eton Choirbook in contemporary music, commissioning new works that set the same texts as used in pieces by Walter Lambe (twice) and William Cornysh. If there's a weakness here, it's that the connections drawn are rather general ones; the inclusion of the four-movement Hallowed by Stephen Hough at the end adds little. But the large dimensions of William Cornysh and Phillip Cook in their settings of Ave Maria, mater Dei are impressive. Recommended, along with others in The Sixteen's Eton Choirbook series.