You are here: Home / Playlists / The Feast of St. Thorlak 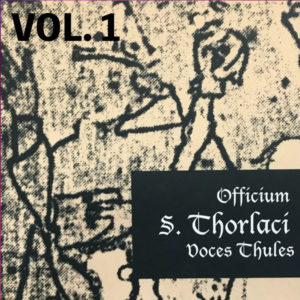 NOTE: All of the music on this program is from the Holland Festival of Early Music at Utrecht 2001. It featured the ensemble Voces Thules, and is a reconstruction of the music for the Feast of St. Thorlak.

Preservation of this program is made possible by a generous grant from Dana Wipperman.

This program was made possible in part with assistance from Radio Nederland, the Utrecht Festival, and the Embassy of the Netherlands in Washington, D.C.

For more information about Dutch culture, you may examine the Netherlands Tourist Board web site at www.holland.com

About the eventual recording from Mark Stanley at ClassicalNet.com:

Here is something a little different, and rather special: a beautifully presented set of three CDs and a DVD to celebrate the Officium S. Thorlaci, or Office of Saint Thorlak, the Icelandic Bishop Thorlak Thorhallsson, for the 800th anniversary of his death in 1193.

In fact preparations for this event began as long ago as 1993 with twin inspirations: the doctoral thesis of Róbert Abraham Ottóson (1912-1974), which provided the theoretical underpinning; and the practical music making drive of a committed and experienced group of Icelandic musicians, Voces Thules, commemorating Iceland's patron saint. Although canonized by the Althing just five years after his death, his sainthood wasn't recognized by Rome until the mid 1980s. Thorlak was at work in the church in Iceland from an early age and made extended visits to such centers of learning and musical activity as Paris, Lincoln and possibly London in his twenties. Turning his back on secular life, Thorlak (or Þorlákur (helgi) Þórhallsson in Icelandic) founded an Augustinian monastery at Þykkvibær in 1161, from where he strove to eliminate clerical malpractice.

His Office consists of beautiful and ethereal music. This is clearly one of many reasons why Voces Thules should turn their attention to it. But it's also the group's mission to source and prepare "lost" Icelandic early music, prepare it and preform/record it – to the advantage of us all. And here is the first fruit of that program, a very impressive one. As the timeline which comes with the CDs' stiff-backed presentation booklet (printed in rich yellow on lush chocolate-colored paper) sets out, Voces Thules (founded in 1992) first performed sections of the Office in December 1993 in Reykjavík; they then began a study retreat and started research into the text and music. Coaches were employed to assist with the mediaeval Latin and a truly impressive body of research on the background, history and performance of the Office was undertaken, members of Voces Thules themselves being intimately involved in all aspects of the work at all stages.

Within four years the transcription of the work had begun; Voces Thules performed in Lincolnshire, visited Paris and the Baltic region by the time the original manuscript had been returned to Iceland. Towards the end of the decade (1990s) the group had made its first full performances of the Office in its old form, which ended in a High Mass and lasted over a day and a half. Exhibitions – for example of the manuscripts – and university courses relevant to and/or inspired by Thorlak and his work were mounted in Iceland. By 1999 preparations were under way for a full recording, which actually took almost five years, and the result of which is the product to hand. During that process Voces Thules were invited to perform at some of Europe's most prestigious and forward-facing early music festivals, including Utrecht and Bergen. They also toured Japan and worked with organizations campaigning in support, for example, of HIV positive children.

This enterprise is, then, as much a justified celebration of Icelandic culture and the Norse contributions to the world as a purely musical "event". And an event the release of this set is, one to be treasured by lovers of early music and admirers of the Norse world alike. It exudes professionalism, collaboration and unselfconscious achievement at every turn and can be thoroughly recommended.

The Office comprises relevant psalms and antiphons in addition to the Ordinaries of the mass.

The recordings were made in Halgrím's Church in Iceland. The acoustic is a spectacular one, and adds particularly well to the sense of presence which the six-person (all men) Voces Thules bring to the music making. The first thing you'll notice is the unhurried, relaxed (though not lax) style of singing. It bespeaks a great confidence and naturalness, surely very similar to how this chant would have sounded when it was sung in the twelfth and thirteenth centuries. The long, gentle lines are nevertheless maintained; every syllable is clearly and purposefully articulated. The unison delivery is excellent; it never lacks character. But more than that, the phrasing is superb. Such verses charged with meaning as:

from the Vespers Hymnus towards the start of the Office (on CD 1) are elevated into sublimity not only by the simple undulating embrace of words and melody, but also by the subdued but nevertheless convincing pace with which the lines are gently but tirelessly accentuated and "paid out" like a skilled sailor with ropes of silk. At a more expanded level such command of the music's structure also helps convey a sense of time passing, of movement and – given the purpose of the music – of devotional development. On the three CDs we have ten sections… Vespers; Complines; Matins; Nocturns; Lauds; Prime; Terce; Sext; Nones; Vespers again then the Mass.

To put off chores, unplug all electronic devices and rid oneself of all distractions possible, then sit down and listen from start to finish to this miraculous music is perhaps not the "soothing incantation" referred to at the end of the otherwise pleasingly non-commercial introductory paragraphs – presumably in an attempt to broaden the project's appeal to those who don't yet understand the context of chant – ought to go a long way to assisting all but the most hardened Philistine in that process. After a while the highly responsive and colorful singing uses its logic and beauty to expel the twenty first century and move one's emotional as well as intellectual and spiritual centers of gravity back into an age and location when noiselessness and environments built for the purposes of worship not tourism really could engender a concentration so intense as almost to be painful. The paradox, of course, is that the pain and focus are dissipated by the very substance of the tenor of the Office itself… humility, wonder, ritual and power, for example, are each too active and vital to leave the participant singer, or the listener, in a position of passive response to the music for very long. The music's sheer simplicity leads through thrall to involvement. Listening to, yet not waiting for, the singers' unobtrusive pauses for breath, for instance, add to the sense of presence, of their communicating as a result of conviction rather than merely mounting a performance.

There is nothing informal about the music making here, though. It's professional to the core. The musicology behind it is impeccable and the presentation in every way exemplary. So if you love plainchant, have even a passing interest in the very rich yet under-explored Icelandic culture and/or just want to draw your own peace and inspiration from beautiful and appropriately characterful unaccompanied singing, this is a set of CDs warmly to be recommended. The DVD contains the text and music from the whole Office.