Three new recordings take us from the court of Louis XIII into the court of his successors, with music by Moulinie, Charpentier, and even Jean-Jacques Rousseau.

NOTE: This program looks at recent releases centering on the musical scene in France at the time of the Kings Louis XIII, XIV and XV. 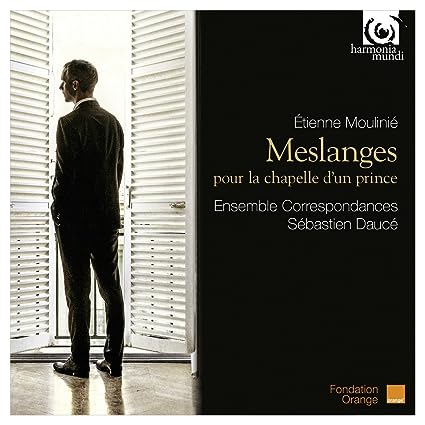 From ArkivMusic: For more than 30 years, the career of composer Étienne Moulinié was inseparably linked with the patronage of Gaston d'Orléans (1608-60), brother of Louis XIII. Moulinié provided the music for the prince’s family from 1627 to 1660, leaving a varied and original oeuvre. Although his secular music is well known, his sacred output, most of it contained in a collection published in 1658 from which this recording presents some of the finest pieces, is still neglected, despite its great beauty, its individuality, and its importance for the development of mid 17th-century French music. Despite several announcements, Moulinié was never to carry out his intention of publishing further volumes, probably hindered from doing so by the death of his patron in 1660. 'The Mélanges de sujets chrétiens' (Anthology of Christian subjects, canticles, litanies, and motets, set to music in two, three, four, and five parts, with a figured bass) is therefore all the more precious in the insight it gives into the music of one of the most original composers of the Grand Siècle at the height of his artistry. Excellent booklet note by Thomas Leconte of the Centre de Musique Baroque de Versailles. 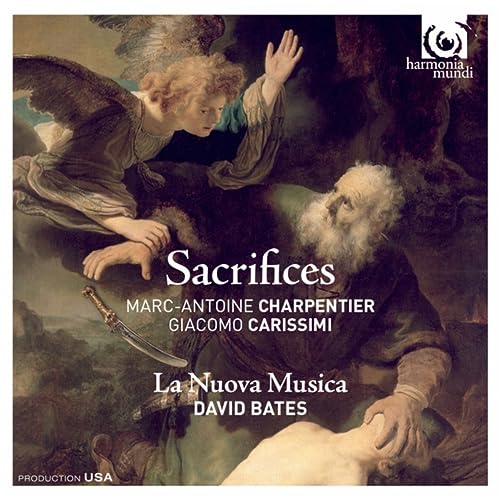 From MDT: David Bates leads La Nuova Musica in 'Sacrifices', a programme of intensely dramatic oratorios from the mid Baroque. Three poignant tales of denail and sacrifice: St Peter's denial of Christ; Abraham's [narrowly averted] sacrifice of his son Isaac; and the Old Testament story of Jepthe, the hero commander who, before leading the Israelites into battle against the Ammonites, vows to God that if he is victorious, he will sacrifice the first living thing he meets upon his return.
Unfortunately it is his darling daughter, who dances out to greet him with cymbals and flutes. Jepthe must honour his vow...
In a dramatic lament, the daughter [she is never named] asks the mountains to bewail her fate - they answer in echoes; this is followed by one of the most moving choruses in all 17th C music. Belgian soprano Sophie Juncker is the daughter [and one to watch].

La Nuova Musica is established in the UK with regular appearances at the London Handel, the Spitalfields and Aldeburgh International festivals, and has achieved worldwide recognition and outreach through a five-record deal with harmonia mundi USA. Its debut recording for the label, released in March 2012, a world premiere on CD of the 1712 version of Handel's 'Il pastor Fido', was proclaimed as the arrival of "an exceptionally talented young British ensemble" (Opera magazine). A second release, of Handel and Vivaldi 'Dixit Dominus', followed in 2013. After its recent debut at Wigmore Hall – performing Francesco Conti's 'L'Issipile' with an all-star cast – The Guardian acclaimed the group as going "from strength to strength". 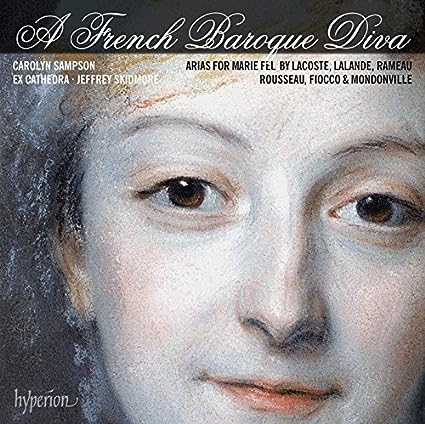 From Gramophone: This is a brilliantly planned and executed, musically illustrated biography of Marie Fel, one of the great 18th-century divas and muse of Rameau, admired by the Philosophes and adored by Paris audiences. So don’t be put off by the apparently recherché repertoire: this is a programme that pleases as much today as it did in hers, guided by Graham Sadler’s beautifully crafted booklet-notes.
Fel made her Opéra debut in a 1734 revival of Louis Lacoste’s Philomèle, singing the role of Venus. Carolyn Sampson, in superb form, is joined here by the choir of Ex Cathedra, who sing with precision and clarity of articulation in a lovely bright acoustic.

As well as at the opera house, Fel also performed at the public concerts held in the Tuileries, where she was a soloist in Latin choral and orchestral music by Lalande, Mondonville, Rousseau and the Italian Fiocco, as well as in private performances of the theatre works by Mondonville and Rameau at Fontainebleau and Versailles included (mainly excerpts) on this disc.

The orchestra of Ex Cathedra, led by Margaret Faultless, provide stirring and sympathetic accompaniments for this varied succession of virtuoso vocal vehicles. Flautist Rachel Brown performs the exquisite solo and concertante lines in Mondonville’s 'Venite, adoremus' and illuminates the sound of the lyre with her piccolo in Rameau’s divertissement from Les surprises de l'Amour. There is also sensitive concertante playing by the bassoonists in ‘Tristes apprêts’ and, with the addition of the oboist Gail Hennessy, in the movement from Lalande’s Cantate Domino.

Best of all, the longer we listen to Sampson’s voice, the more she seems to inhabit the aura of Fel, clearly a skilled and charismatic yet deeply affecting performer. Fel’s artistic flexibility is further demonstrated by the inclusion of the Fiocco (here performed with ornamentation Fel wrote into her part), Mondonville’s frothy pastorale—obliging Sampson to sing in Fel’s native Occitan—and Rousseau’s bang-up-to-date Salve regina, which obliges the soloist to blend her voice with the horns. Sampson’s performance is the more admirable for evoking the spirit of another singer.

Start to finish, Jeffrey Skidmore devotedly shapes and paces the programme to achieve a fittingly vivid portrait of Mlle Fel.