You are here: Home / Playlists / Heroines of Love and Loss The women appearing before our ears throughout this programme range from the Virgin Mary and Dido, queen of Carthage, to Shakespeare’s Desdemona and the unfortunate Anne Boleyn, waiting for her execution in the Tower of London in 1536. But the disc also features four other heroines – the Italian composers Claudia Sessa, Francesca Caccini, Lucrezia Vizzana and Barbara Strozzi. All active between 1590 – 1675, they will have required great courage to rise above the social conventions of the time, but this surprisingly productive period for female composers also offered an opportunity that would disappear in later centuries: the all-female environment provided by the convent. More than half of the women who published music before 1700 were nuns, including Sessa and Vizzana, who are here represented by brief meditations on the suffering and death of Christ. Caccini and Strozzi, on the other hand, lived very much in the secular world – Caccini at the Florentine court and Strozzi as a free-lance musician and composer in Venice. Unhindered by the restrictions imposed by the church on sacred music they both adhered to the new stile moderno championed by Claudio Monteverdi. Celebrated for their singing, they composed vocal music which makes ‘the words the mistress of the harmony and not the servant’, to quote Monteverdi’s brother Giulio Cesare. The soprano Ruby Hughes has already made her name for herself in a wide-ranging repertoire, but has a special love for the constellation of lute, cello and voice. With Jonas Nordberg and Mime Yamahiro Brinkmann – who also contribute instrumental solos – she here revels in the dramatic and expressive potential offered by the combination, and by the music by these female composers and their English colleagues Henry Purcell and John Bennet.
From Early Music Review: For all its apparent thematic interest, this CD is really a showcase for the vocal skills of Ruby Hughes, and these turn out to be considerable indeed. In these songs accompanied by lute and cello there is no place to hide, but Hughes’ impeccable technique and expressive imagination take us on a rewarding tour of this lovely repertoire. Her opening Purcell air from Bonduca  ‘O, lead me to some peaceful gloom’ establishes the air of melancholy which will prevail, but also lays out Hughes’ credentials as she demonstrates a rich palette of vocal colours. These truly come into their own later in Hughes’ intense account of Dido’s Lament. Amongst the tragic heroines we also have fine music by 17th-century women composers Barbara Strozzi, Claudia Sessa, Lucrezzia Vizzana and Francesca Caccini, who – with the possible exception of Strozzi – have left distressingly limited evidence of their musical careers. I have highlighted Ruby Hughes’ lovely singing, but the instrumentalists both accompany her impeccably as well as contributing fine instrumental interludes of their own. These include engaging accounts of movements from Vivaldi’s G minor Cello Sonata and a wonderful Toccata Arpeggiata  by Giovanni Kapsberger and a Ciaccona  by Alessandro Piccini both for solo theorbo. The CD ends appropriately with a riveting account of the anonymous ‘O death, rock me asleep’, the words of which are attributed to the tragic Anne Boleyn. 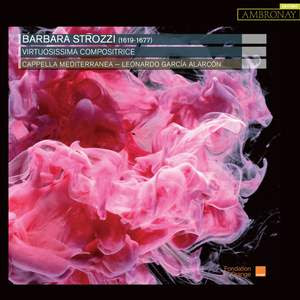 The virtuoso Venetian diva of the 17th century, Barbara Strozzi, Monteverdi's heiress, journeys the passions of the soul through a daring mosaic of styles and rhythms. Leonardo Garcia Alarcon, who is one of the rising generation of baroque conductors, is leading a major research project on the specific parameters which make up musical performance, paying particular attention to improvisation techniques and the relationship between text and music. His work at the Ambronay Festival has focused on the performance of 17th-century Italian music including rich and little-known repertoire of motets and madrigals by Barbara Strozzi, Isabella Leonarda and Antonia Bembo.
From Stephen Midgeley: This is a fascinating, colourful, and in places controversial anthology of the music of an extraordinary woman. Barbara Strozzi, admirer of Monteverdi and pupil of Cavalli, was already showing prodigious talent as a singer at the age of 17, being referred to in the phrase "virtuosissima cantatrice" which provides the cue for the title of the present disc. Renowned also for her intellect and her beauty, by the time she was 25 she had already published her first book of madrigals (1644), some of which are included here. Taking a leaf from Monteverdi's book, and in particular from his 8th book of madrigals, but very much with her own individual style, Strozzi's music is eloquent, dramatic, emotional and profound.

All these qualities are vividly demonstrated in these beautiful, carefully considered performances by Leonardo García Alarcón and his group Cappella Mediterranea. The programme is designed to offer a sampling of Strozzi's musical development, from polyphonic madrigals to accompanied monody and beyond; a couple of items by Monteverdi, and one by Sigismondo d'India, are added to the mixture in order to suggest, as Alarcón explains in his booklet notes, a Venetian musical evening. His players and singers all perform superbly, the star in my view being the soprano Mariana Flores for her stunning rendition of the monumental lament over an ostinato bass, "Che si può fare" from Strozzi's "Arie a voce sola" of 1664 - a spellbinding performance that combines deep feeling with infinite delicacy. The instrumental accompaniments are beautifully arranged and played, with lovely improvised ornamentation from the cornett among others, although I for one could have done without the percussion intrusions in Monteverdi's madrigal "Hor che 'l ciel e la terra" - the great master's music already expresses vividly the poet's inner turmoil and fury at the words "Guerra è il mio stato", and there is no need for anyone to bang on a drum to prove the point. In fact percussion is used again later on, in Strozzi's "Vecchio amante", but here it works much better, especially since trumpets and drums are actually mentioned in the text.

The disc is well documented and attractively presented; the booklet includes all the Italian texts with translations into English and French, a short but fascinating biography of this extraordinary composer, as well as enlightening comments by the conductor and some atmospheric photos of the musicians and recording sessions.

There are a number of recordings of Barbara Strozzi's music available, but this one from Alarcón and Cappella Mediterranea is surely among the very best. In particular, unlike some of the other discs which concentrate on a single genre or opus number, it presents music from different stages of her life - and, what is more, in the context of works by some of her contemporaries. The performances from this very fine early music group are brilliant, thoughtful and deeply committed, very much in the way the music deserves. Existing Strozzi fans need not hesitate, while baroque enthusiasts who are not yet familiar with her music will find this CD a fascinating, indeed mesmerising, introduction to the work of a bold and original genius.

For more information about this ensemble: https://ladm.org/ 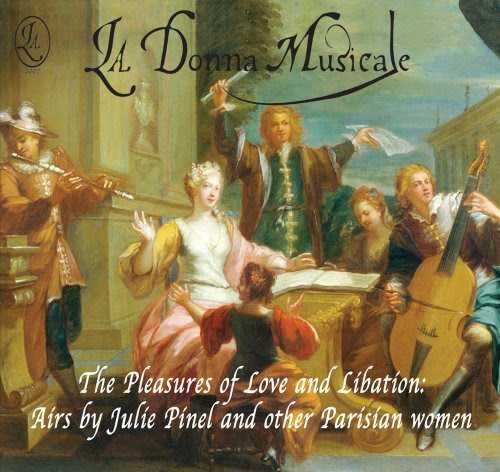 Our third CD, The Pleasures of Love and Libation, departs the sacred theme of our previous releases, as we explore the decidedly secular contributions of Parisian women composers to the French Baroque and Rococo genres of the airs sérieux and airs à boire (serious and drinking songs). These song forms celebrate passionate longing and dissolute intoxication. Julie Pinel (fl. 1737) is our featured composer, and we include several selections her 1737 publication Nouveau recueil d’airs. Music composed by unknown Parisian women and by Elisabeth Jacquet de la Guerre is included as well. This CD res the luxuriant environment of an intimate Parisian salon, replete with the sounds of voices in solo, duo, and trio settings, with flute accompaniment and supported by the captivating tones of the theorbo, baroque harp, harpsichord, and viola da gamba.
From Amazon.com: These “pleasures” are all audible, though drinkable and amatory pleasures might charmingly be enhanced if accompanied by this elegant performance. It's delicately sensuous 'salon' music fro 18th C France, performed with polish and panache by the singers and instrumentalists of "La Donna Musicale", a Boston-based ensemble that was one of the sensations of the 2011 Boston Early Music Festival. The program is a choice blend of vocal and instrumental music by Julie Pinel, Elizabeth Jacquet de la Guerre, and Madamoiselles Herville, Denis, and Bataille, all associated with genteel Parisian salons and all published by the famous music printer C. Ballard. The singers include sopranos Sherezade Panthaki and Yulia Van Doren, mezzos Lydia Knutson and Daniela Tosic, and tenor Aaron Sheehan. Gambist Laury Gutierrez is the director of La Donna Musiclae. Catherine Liddell plays theorbo and Noriki Yasuda plays harpsichord, along with other excellent musicians on harp, violin, recorder, and organ.

Julie Pinel's chansons are playful, flirtacious, witty, and above all pleasurable. The first track on this CD, "Rossignols vous chantez" (Nightingales, you sing...) sets the tenor for the whole performance; I've heard any number of Baroque odes to nightingales, and Pinel's is both the most expressive and the most bird-like in its recorder arpeggios. All the lyrics are of course in French, but English translations are provided. The instrumental pieces include a frolicksome "Rigaudon" for harpsichord and an well-crafted Sonata in D minor for violin and continuo.

La Donna Musicale has also released recordings of music by two other women composers of the Baroque era, which, perhaps unexpectedly for many listeners, was a lot more receptive to and supportive of women in music than the later Romantic era would be. One of the recordings is entirely devoted to Ana Bon, an Italian who had quite a glamorous long career as a singer chiefly of her own music. Then there are also two CDs of "The Seven Psalms of David", composed by Antonia Padoani Bembo.

All tracks by Julie Pinel unless otherwise noted: