You are here: Home / Playlists / Italy in the 17th Century 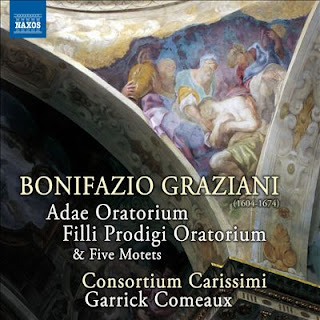 The small-scale motet was at the heart of daily and weekly musical practice in the Roman Catholic Church of the mid-seventeenth century. One of the genre’s most distinguished exponents was the maestro di cappella in the Jesuit Church in Rome, Bonifazio Graziani. An ordained priest, he was commissioned by Pope Innocent X to compose solemn music for the ‘most holy year’ of 1650, and his works were in demand across Europe. His elegant mixture of text, melody, and harmonic accompaniment is highly distinctive, with the two oratorios revealing the extent of his compositional breadth.

Florence, 1600: Giulio Caccini and Jacopo Peri, two virtuoso singers and rival composers. Striving to rediscover the expressive powers of ancient Greek tragedy, they revolutionized the art of singing and created a new style, which eventually would give birth to opera. In reaction to Renaissance polyphony, these monodies were intended to be sung with the simple accompaniment of a plucked intsrument in order to express the full range of human passions. Peri and Caccini would often accompany themselves but they would also perform with certain family members. Thus brother and sister in this duo follow most naurally a tradition passed on by those great musicians.

Despite a hugely prolific output spanning a career of more than 50 years, Antonio Lotti is now known almost exclusively for his eight-part setting of the ‘Crucifixus’. It is not widely known that that motet is in fact part of a complete Credo setting, itself part of the Missa Sancti Christophori that receives its first recording here. Much of Lotti’s music was written for the Basilica of San Marco in Venice at a time when expense and extravagance were not spared. He often wrote daringly for much bigger forces than were usual; in reviving Lotti’s music, that sheer scale can present a challenge. Rhythmic shock and awe, masterful variety, incessant invention and a defiant refusal to conform make this music overripe for revival. Lotti is at the cutting edge of the galant style that prefigures the Classical era; his harmonies can be surprising, daring – even outrageous.

For their debut on Delphian, The Syred Consort and Orchestra of St Paul’s have collaborated with musicologist Ben Byram-Wigfield to bring this survey of Lotti’s music to life. Ben Palmer’s singers dazzle in their virtuosity, and the instrumentalists play with immaculately crisp ensemble. There is excitement. There is hushed poignancy. And throughout there are Lotti’s luscious harmonies, which make this music nothing short of addictive.