NOTE: All of the music on this program features the Cut Circle ensemble directed by our guest, Jesse Rodin. 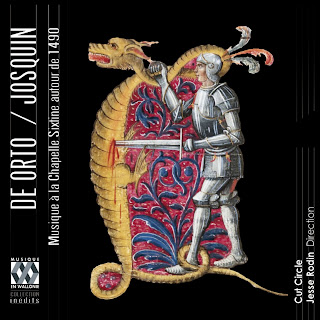 For complete information about this ensemble:

From AllMusic.com: This handsomely bound CD release (also available as a digital download, but here the CD version is the choice) is in turn a companion to a larger opus, a musicological work about the period of Josquin's career when he was a singer in the choir of the then-new Sistine Chapel in Rome. That might be enough to put off listeners raised on the stultifying performances of Renaissance choral music issued by academic ensembles in the middle of the 20th century, but such a reaction would be a mistake: the U.S. vocal group Cut Circle (the term refers to a time signature used in Renaissance notation), with the difficult forces of a couple of singers per part, delivers performances under director (and book author) Jesse Rodin that are both tonally confident and musically sensitive. The rousing motif repetitions in Josquin's music, which must have seemed virtually unthinkable to his first hearers, receive their full measure of energy in Cut Circle's performances, but the singers never obscure the contrapuntal intricacies. The biggest news here is the presence of a good deal of unknown music: not only the unaccountably never-recorded Josquin motet Nardi Maria pistici, but music by Josquin's contemporaries in Rome, Gaspar van Weerbeke and the completely neglected Marbrianus de Orto. This is music Josquin would certainly have known, and even for casual Renaissance listeners interested in imagining the music of the Sistine Chapel in its early days it adds clarity to Josquin's innovations. Consider the Missa L'homme armé of Orto on CD 2 (tracks 3-7). There was already a tradition of settings of the crusader song L'homme armé by the late 15th century, but this one especially bears a close relationship to Josquin's Missa L'homme armé super voces musicales, which closes out the program. Both exploit the possibilities of beginning the song on different degrees of the mode, and it is not clear which work was composed first. Josquin's mass is, it is true, more ingenious, but even general listeners will get a grip here on just why that is. Strongly recommended.

From Musica Dei Donum: In 2010 the Cappella Pratensis recorded a disc with music performed in Rome under the papacy of Leo X who ruled from 1513 to 1521. The present recording could be considered its counterpart as it is devoted to music performed at the Sistine Chapel one generation earlier, around 1490. At that time Josquin Desprez was the most famous composer in Europe, and the main representative of the Franco-Flemish school. He was active as a singer in the Sistine Chapel from 1489 until at least 1494.

The programme here comprises pieces from his oeuvre which are certainly authentic and were probably written in Rome. It is extended with music by some of his lesser-known contemporaries: Marbrianus de Orto, Gaspar van Weerbeke and Bertrandus Vaqueras, who were all singers in the Sistine Chapel at the end of the 15th century.

Weerbeke was of Josquin's generation and also born in Flanders, in the town of Oudenaarde. It is not known for sure when he went to Italy, but there is documentary evidence that he was in Milan in the early 1470s. His employer, Duke Sforza, sent him back to recruit singers. In the winter of 1480/81 he went to Rome, where he became a singer in the papal choir until 1489. He returned in 1500 and remained in Rome until 1509. The number of his works which have been preserved is not that great: eight masses, two Credos, about 20 motets, some motet cycles, a Magnificat and a set of Lamentations, plus a small number of secular pieces. One of the features of his oeuvre is the variety of composition techniques which he made use of. The three pieces on this set bear witness to that. Dulcis amica Dei/Da pacem quotes the plainchant antiphon Da pacem Domine. It is scored for five voices, but includes various two-part passages. In this motet Weerbeke makes use of hemiolas. Sequential writing dominates Ave regina coelorum, whereas dissonances appear in the Agnus Dei from the Missa Princesse d'amourettes. The cantus firmus of this mass is a chanson which has been lost.

Bertrandus de Vaqueras was probably from southern France; his last name may refer to the place of his birth. It seems that he or his family had some ties with northern regions, and especially Flanders. The first evidence of his presence in Rome dates from 1481 when he acted as a contrabass singer in the choir of S Pietro. In 1483 he joined the papal choir, a position he held until his death in 1507 or earlier. His output is very small: two masses, two Credos, three motets and an untexted chanson setting. The motet Domine non secundum peccata nostra, a piece for the Lenten period and for Ash Wednesday, begins with passages for two voices and is then extended to four. On this disc it is immediately followed by Josquin's setting which has basically the same texture. Vaqueras' motet was his only printed composition.

Marbrianus de Orto's original name was probably Dujardin, but he himself used the Latin name De Orto. It is likely that he was born in Tournai in Flanders. It seems that he started his career as a member of the household of Ferry de Cluny, cardinal-bishop of Tournai. In this capacity he travelled with his employer to Rome in 1482; the next year Ferry died, and De Orto was appointed as singer in the papal chapel. Sometime in the first half of the 1490s he went to Nivelles, a town south of Brussels, where he had become dean of the collegiate church of Ste Gertrude. From 1505 onwards he had close contacts with the Habsburg-Burgundian dynasty. His output isn't that large, but his status as a composer is confirmed by the printing of five of his masses by Petrucci in Venice in 1505. The masses are considered the most important part of his oeuvre.

The chanson L'homme armé was one of the most popular in the renaissance, and was often used as cantus firmus for mass settings. This production includes two, one by De Orto and the well-known setting by Josquin. In his liner-notes Jesse Rodin explains that both settings are technically complicated. He notes several remarkable features in De Orto's setting, such as the fact that the cantus firmus is quoted in all voices and the metrical irregularity which turns up time and again. The latter often "effects a continuous hemiola, as in the Christe (...), where the tenor sounds as it is constantly "off the beat" even though it is really just "on" its own, separate beat". De Orto's compositions are also characterised by a particular density, such as Ave Maria gratie. That density is even increased through the use of canon-technique in the hymn Lucis creator optime and the Gloria from the Missa ad fugam.

As this project's purpose seems to be to give an overview of the kind of music performed in the Sistine Chapel at the end of the 15th century, Jesse Rodin has chosen to extract some movements from various masses by Josquin. In the case of the Missa La sol fa re mi that goes even so far as to sing just one section from the Credo, whereas from the Missa Fortuna desperata only the first part of the Sanctus and the first Agnus Dei are performed. That is rather unsatisfactory, but as these works are available complete in other recordings it isn't too much of a problem. As far as the former mass is concerned, Rodin explains the various techniques Josquin has used, and then adds that these are difficult to hear. That regards an aspect of renaissance polyphony which can be quite frustrating for listeners. They read about sophisticated techniques which composers used and then are unable to recognize them. It is unlikely that composers were aiming at an 'audience' able to hear what they had done. The singers knew it very well, and in the end the music was not written for an earthly audience to be enjoyed or admired, but to the honour of God (and the reputation of their employer, lest we should forget).

The only anonymous liturgical piece, a setting of the Credo, was probably not written in Rome, but in Milan, and was added to the repertoire of the Sistine Chapel. It is relatively simple as was common in Milan.

The American ensemble Cut Circle was founded in 2003 by Jesse Rodin, an internationally renowned expert of 15th-century music who participates in the New Josquin Edition. Last year he published a book on Josquin and the Sistine Chapel. The present recording can be considered a musical illustration of his book. It seems to be the first recording of this ensemble, and it is most impressive. The singing is excellent throughout, and all the members have fine voices which are perfectly suitable for this kind of repertoire. The many episodes for reduces forces reveal their individual skills. The transparency, even in the most dense pieces, is remarkable. Rodin is not afraid to create some pretty strong dynamic contrasts. The closing sections of Josquin's Missa L'homme armé are good examples. The cantus firmus in the Sanctus is probably making its presence too much felt; I wonder whether that was the composer's intention.

The liner-notes are highly interesting, and it is useful to read the comment on every single piece before listening to it. Rodin has been very helpful by indicating the time when the things he describes make their appearance. Nobody interested in renaissance music should miss this production.